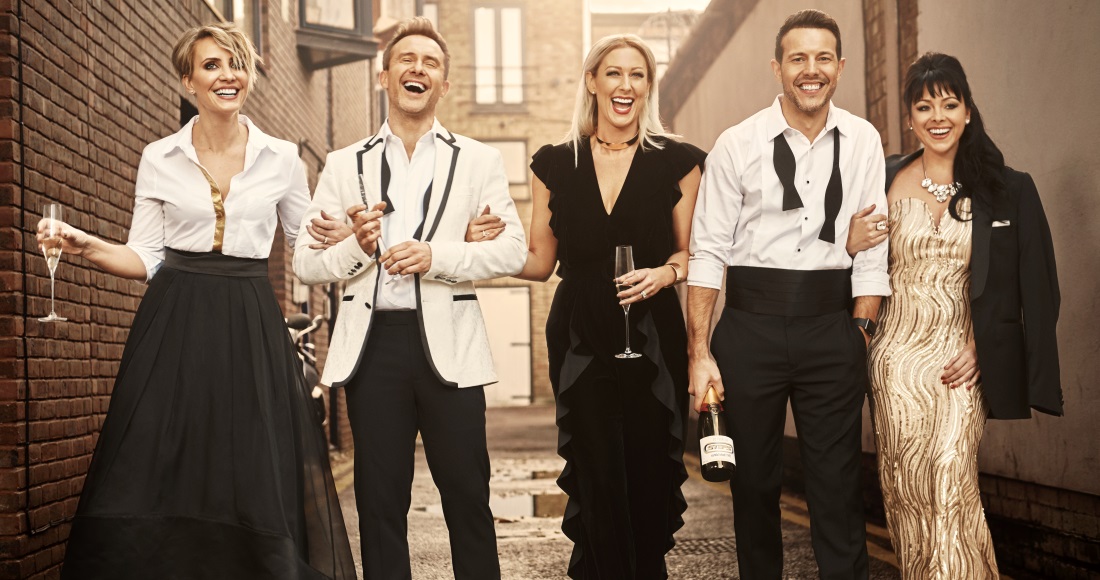 After 16 years of hurt, Steps are officially back and armed with a (proper) new single that, by all accounts, the nation seems to be taking into their hearts. And why wouldn't they? There's a noted absence of unpretentious pop on the Top 40 and the moment; a sweet spot Steps have always managed to hit.

Official Charts is celebrating their return the only way we know how, by revealing the group's biggest selling singles. That's all 15 of their Top 40s, ranked in order of sales. We've also taken a look at their most streamed songs, which paints a very different picture of the band in the 'digital age'. More on that below.

It's time to begin now count it in...

Compared to the rest of their repertoire, Steps' debut single sticks out like a sore thumb for two reasons. 1.) It's essentially a novelty techno-pop line dancing track and 2.) The boys take the lead. There's no signature belting from Claire, no 'hang on a moment, is that Lisa Scott-Lee singing?' moment and zero reference to Abba.

What's even more remarkable about 5, 6, 7, 8 is that it peaked at Number 14 on the Official Singles Chart, making it one of their lowest charting singles (yes, we're pretending 2012's Light Up The World never happened)  How many pure pop bands can you think of who got a second go of the wheel after a Top 20 debut single in the past decade?

Despite its relatively low chart placing, 5, 6, 7, 8 is Steps' third best selling single with 365,000 copies sold. It's also their most streamed song at 3.44 million plays, which we're sure you'll agree is pretty surprising. Perhaps its being wheeled out as the new Cotton Eye Joe at children's parties?

Steps' third single One For Sorrow is what fully established them as a bona fide pop band. The song is essentially Abba's The Winner Takes It All for 1998, with its drama-packed intro, wistful melody and weeping-in-the-club-loos chorus; complete with big vocals from Claire and an a dance routine that even our Nan could follow.

One For Sorrow debuted at Number 2 on the Official Singles Chart, beaten to the top by Manic Street Preachers' If You Tolerate This Then Your Children Will Be Next. Its total sales to date are just over 423,000 and it's their fourth most streamed song, just shy of 1 million plays. It may have lost out on the top spot, but it did finish ahead of new entries by The Honeyz, Faithless and Madonna that week, which is pretty impressive, right? Look back at the the full chart that week here.

Steps fans might remember that in addition to the original video of them moping around a house and dancing in front of sunflowers, the group also made a clip for a remixed version aimed at the US market whilst they were on tour with Britney Spears. Speaking of which, is that Britney at the 1m43s mark? 👀

Steps' extremely well-judged cover of Bee Gees hit Tragedy - released as a double A-side (remember those?) with Christmassy ballad Heartbeat - is their biggest selling single. It was the group's fourth release and encapsulated a lot of what Steps were about: pure pop, off the wall (just watch its accompanying video) and ultimately a bit of fun.

The single was their first aimed at the busy Christmas market, and while it made the Top 10 for the Official Christmas Chart, it reached Number 1 two weeks later in January 1999. The single itself has sold a massive 1.16 million copies, while an additional 50,500 of you have downloaded the songs individually in the digital age, making its total sales 1.21 million if we combine the lot. It's also their second most-streamed track, with 2.7 million plays.

Looking at the rest of Steps' biggest sellers, special mentions go to their only other Number 1 single, 2000's Stomp, which finishes 11th with just over 181,000 sales, while their cover of Christmas classic Merry Xmas Everybody is their third most-streamed (1.85m), despite not being in their Top 15 based on pure sales.