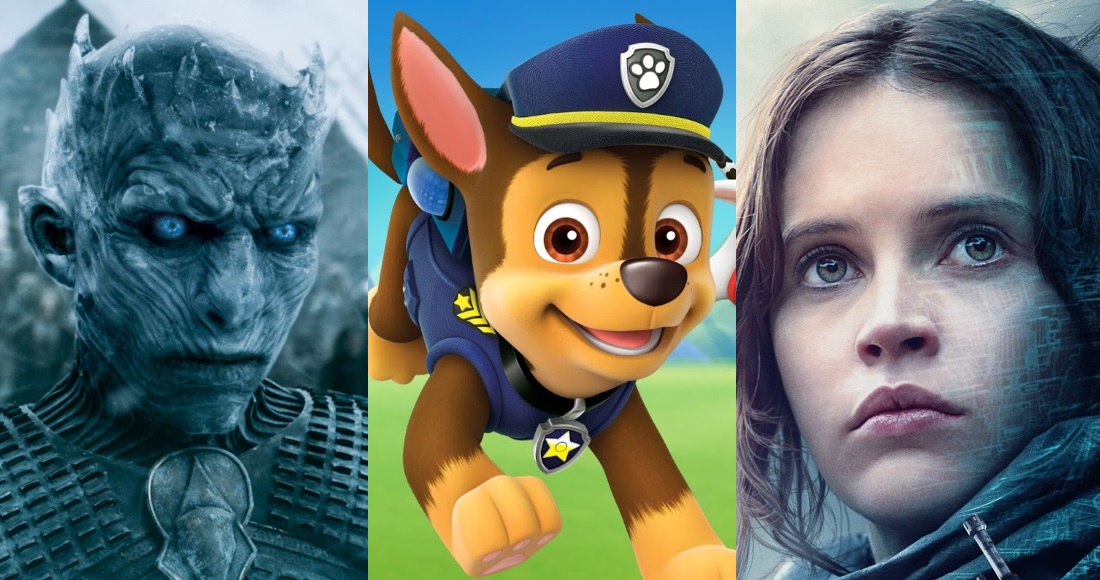 Star Wars and Game of Thrones were among the top selling franchises on DVD and Blu-ray in 2017.

Commissioned by the Official Charts Company, 2017's edition of the annual franchise report reveals that Star Wars was the most successful entertainment brand of the past 12 months, shifting more DVD and Blu-ray units than any other household name.

Rogue One: A Star Wars Story ended 2017 as the second most popular DVD with 1.19 million units sold. That figure combined with the still-popular Star Wars: The Force Awakens and others put the franchise on top, beating out Beauty and the Beast. Overall, 1.49 million Star Wars DVDs and Blu-rays were sold in 2017.

Including sales of both the standalone movie Bridget Jones' Baby, plus a box set of the latest release and its predecessors, the Bridget Jones's Diary franchise ended 2017 as the third biggest (973,000 sales), ahead of Guardians of the Galaxy in fourth, and Lego at Number 5. See the full Top 10 below.

Looking at TV franchises only, Game of Thrones finished head and shoulders above its closest rival, with 711,000 sales last year compared to 206,000 for Mrs Brown's Boys.

Cult sci-fi series Doctor Who and police drama Line of Duty also proved popular on DVD/Blu-ray, finishing at 3 and 4 respectively, while one of the BBC's most popular shows, Blue Planet, finished at 6.

When it comes to children's favourites, Paw Patrol barks its way to the top of the 2017 chart with a whopping half a million sales on DVD/Blu-ray. Lego follows in second place with 369,000 sales, while Barbie finished in third (260,000).

Finally, check out the combined Official Top 10 Franchises of 2017 below: