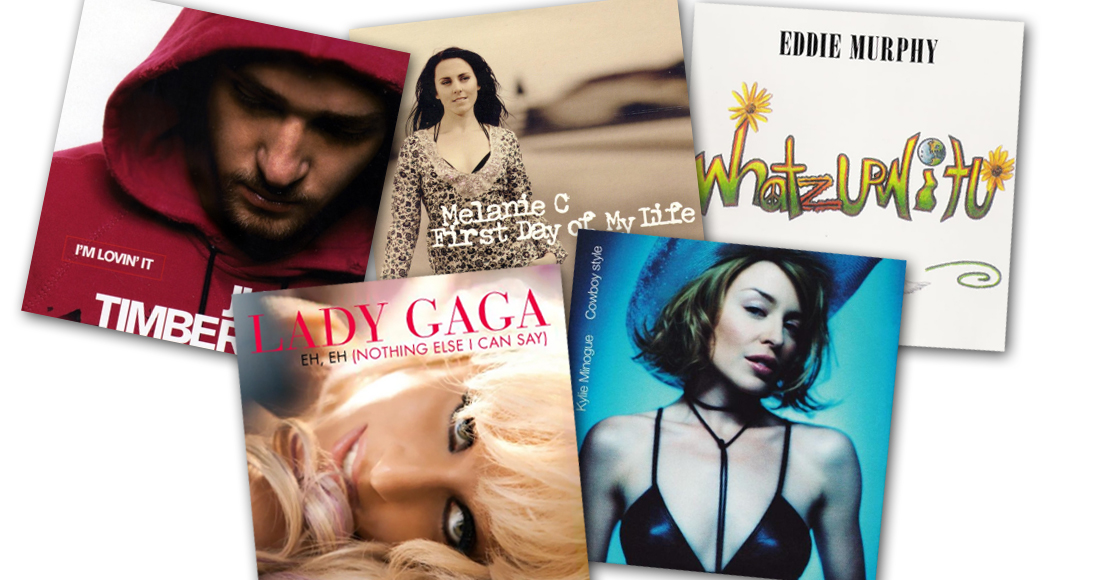 Thanks to #NewMusicFriday, it's pretty usual for all countries around the world to be treated to the same singles from big artists at the same time. But back in the day when songs were released on CD single and had to be shipped across the world, it wasn't uncommon for popstars to release different singles to a variety of countries. Songs that were huge hits in one place might only stay album tracks in the UK. Not so much anymore, because you know, the internet.

We look back at some of the huge UK hits that never were, with singles that never got a full release in dear old Blighty. We've missed some classics, it has to be said.

Kylie's had a few tracks that never got a proper UK single airing. She started off with It's No Secret off her debut album, a single in the US. There was even a video! A few years down the line, and she released Cowboy Style in Australia but nowhere else.

But perhaps her most famous 'hit that never was' situation was fan-fave Your Disco Needs You. The camper-than-Christmas stomper was released as a single in Germany, but was consigned to album track classic status in the UK. Knowing in her heart that this was a huge injustice, and that the UK deserved this song, Kylie regularly performs Your Disco Needs You on tour. See all Kylie's UK hit singles and albums in our archive.

Michael Jackson is another one of those artists who released songs in different markets. Earth Song, which was the Official Christmas Number 1 in the UK in 1995 and is MJ's best-selling UK single, didn't get released in the US, while the UK missed out on Butterflies, Michael's final single from a studio album.

An often-forgotten Michael Jackson single (for reasons we'll let you decide on) which also didn't see a UK release was his feature on Eddie Murphy's 1993 song Whatzupwitu?. A music video was released, though it was voted the third worst music video ever by MTV viewers in 1999. Ouch.

Since she started out in 1990, Mariah's had a slew of hits in the UK – 39 Top 40s, to be exact – but there's one glaring omission. The slinky, sultry R&B jam The Roof, from Mariah's Butterfly album, never got a full release in the UK, and didn't get much attention on the radio, so climbed no further than the very depths of the Top 100. It could've been so beautiful. All Mariah's UK hits are in her Official Chart archive here.

Back in 2000, Brit's fourth single in the USA was syrupy ballad From The Bottom Of My Broken Heart, but in the UK, the song was shelved in favour of Born To Make You Happy. It turned out to be a canny move: Born To Make You Happy gave Britney a second UK Number 1. From The Bottom Of My Broken Heart did make the UK Top 200 on imports alone, though. Check out the hits that Britney did release in the UK in her artist hub.

Roundly ignored in the US and UK, the bouncy, poppy Eh Eh (Nothing Else I Can Say) was a Top 20 hit in Australia and was Gaga's third Top 10 in New Zealand. In the UK, we got Paparazzi, followed by LoveGame, instead – I think we can all agree that was a much better deal. See all Lady Gaga's UK chart peaks in the Official Chart archive.

Rihanna's fourth album Rated R saw her take a new, raw direction, and while the album produced hits like Russian Roulette and Rude Boy, other songs perhaps didn't live up to their full potential in the UK. Wait Your Turn and Hard were announced as singles but missed the Top 40, but Rockstar 101 was never meant for British ears.

It charted on the Billboard Hot 100, and went Top 30 in Australia, but for the UK it was a one-way ticket to album-track status for the gutsy song, which features Guns N Roses legend Slash on guitar.

Oh, wow, remember that amazing huge hit that Justin had in the UK with that Beyoncé collaboration? No, us neither, because it was never a single here. Boo. Album track Until The End Of Time, taken from Justin's sophomore effort FutureSex/LoveSounds, was rerecorded with a Beyoncé contribution and released as a single in the US. It even went Top 20! We're willing to bet that, if challenged, Bey wouldn't be able to remember a single lyric of this one.

Another Justin track that made the charts elsewhere but never got a look-in in the UK was I'm Lovin' It, which JT recorded for a well-known hamburger chain. Believe it or not, it went Top 20 in Ireland.

Speaking of King B, she too has cruelly denied the UK of a potential monster hit. The US got Ring The Alarm, featuring Bey as a wronged woman you would definitely not mess with twice, as a second single from B'Day. Despite amazing artwork, which featured Beyoncé taking two crocodiles for a walk (!!! #petgoals), it missed the Top 10 there. Over in the UK, Beyoncé moved straight on to Irreplaceable, but it's not all bad news: the UK got a single release of Greenlight, complete with banging Freemasons remix. The US didn't. Ha!

Fun fact: For years, the Freemasons remix of Ring The Alarm was used to accompany Dermot O'Leary's entrance to the stage at the beginning of each episode of The X Factor.

After Melanie C's 2005 album Beautiful Intentions didn't quite match the success of its predecessors, its third single First Day Of My Life didn't see a UK release - but that didn't stop it from becoming a huge hit elsewhere.

Written by songwriting supremo Guy Chambers (!), Enrique Iglesias (!!) and originally recorded in Italian by Andrea Bocelli (!!!). Mel's version catapulted the track to Number 1 in Germany, Spain and Switzerland, and she even rerecorded it in French. Blimey.

Pray silence and bow your heads for You Are, which was added to the kittycats' first album following Kerry Katona's departure. A potential smash hit, a full release in the UK was shelved and the band moved on to the next album, and the Top 10 might of It's OK. You Are did manage to make the Top 20 in New Zealand and went Top 40 in the Netherlands and Switzerland. Our loss was their gain.

Her Madgesty has never been afraid to switch things up and release different singles all over the place to keep things interesting. She released Oh Father in the UK five years after everyone else got it, and Dear Jessie never saw the light of day in the States.

One of her most successful US hits not to get a shot at the UK charts is Keep It Together, a Billboard Top 10. By the time it was released, Madge had got bored of her Like A Prayer album and swiftly shunted the UK on to Vogue, relegating Keep It Together to the B-side. Bye Bye Baby, from the Erotica album, got a release in Italy, making the Top 10, and Australia where it made the Top 20. How would it have done in the UK? We'll never know. :(

What's your favourite international single that never got to make the UK charts? Find us on Facebook or Twitter or let us know in the comments below.