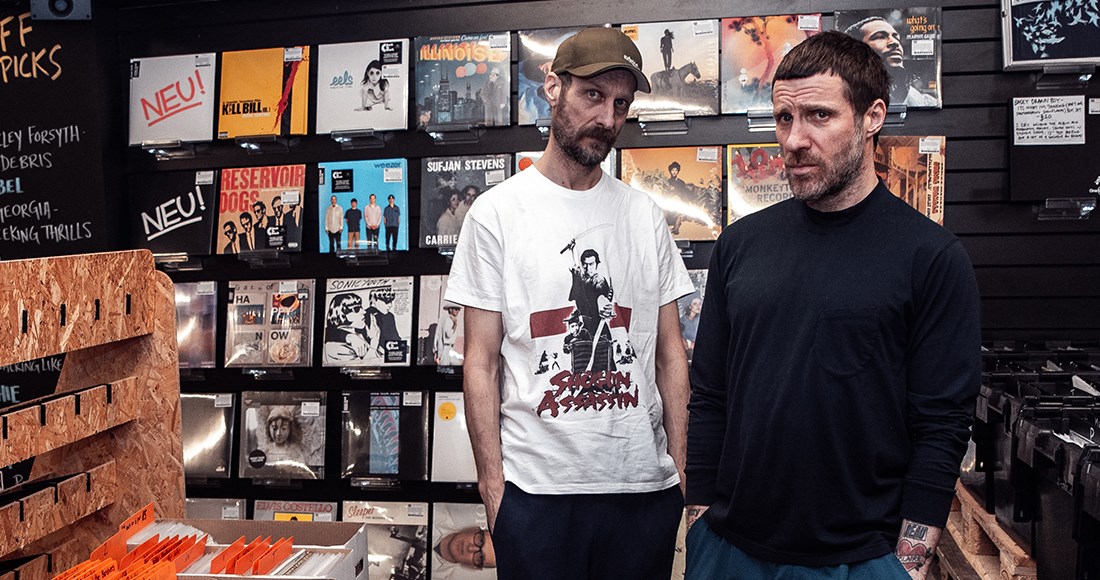 Sleaford Mods are leading today’s Official Chart Update and the race for this week’s Number 1 album.

The Nottingham duo of Jason Williamson and Andrew Fearn scored the most vinyl sales this past weekend with new retrospective album All That Glue, putting them in the lead for Number 1. However with just 1,100 chart sales separating the Top 5 this week, it’s going to be an incredibly close chart battle for the top spot.

If Sleaford Mods hold on, it will be a personal best for the duo, and their first chart topper. Their previous best was a Top 10 in 2019 with Eton Alive which peaked at Number 9. See Sleaford Mods’ chart history.

Jason Williamson will be discussing the punk band’s latest record on Official Charts, Record Store Day and National Album Day’s Facebook live stream series The Record Club this week. Taking place on Wednesday May 20 at 6:30pm, Jason will be in conversation with host Jess Iszatt. Click for a reminder of when the broadcast goes live below.

Lewis Capaldi is aiming to return to Number 1 on the Official Albums Chart a year to the very week that his debut album first topped the charts – Divinely Uninspired To A Hellish Extent is at Number 2 midweek and is the most streamed album of the week so far.

Americana group Jason Isbell and The 400 Unit are on course for a career best with their seventh studio album Reunions at Number 4, the most downloaded album over the past three days. Atlantan rapper Future could also claim his first UK Top 5 entry with High Off Life at Number 5.

Gothic metal band Paradise Lost could secure their first Top 40 album since June 1995 with Obsidian at 6, while US rapper Polo G could take out his first UK chart appearance with second studio album The Goat at 10.

Recorded entirely from her home during lockdown, Charli XCX’s fourth studio album How I’m Feeling Now is on track for the Top 10 at Number 17, the debut album from Scottish singer-songwriter Callum Beattie titled People Like Us is at Number 18, and Together the first studio album in 39 years from new wave group The Vapors is currently at 20.

Finally, Set My Heart On Fire Immediately, the critically-acclaimed fifth album from US art rock singer Perfume Genius is at Number 40 at the midweek mark.