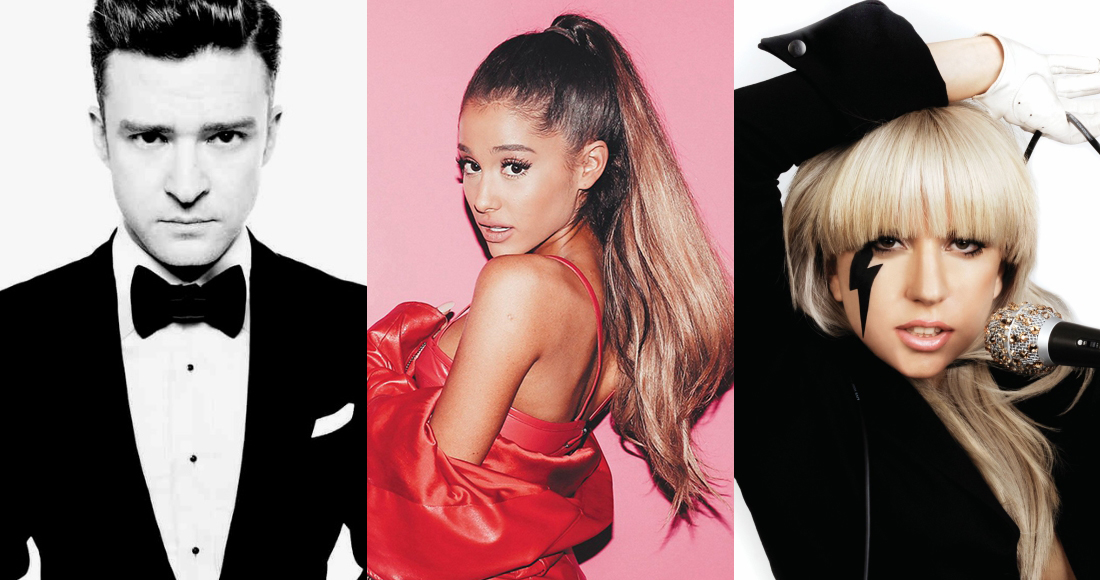 We all know the lyrics, but have you ever wondered what inspired your top tunes? We take a look at how some of the Official Singles Chart’s biggest hits came to be. Does your favourite tune mean what you think it means?

Ariana Grande – Side to Side

When Ariana premiered this track on the MTV VMAs with a fantastically raunchy performance alongside Nicki Minaj, fans were left wondering whether the song really was about sex, or merely a strenuous spin class. Perhaps "dick bicycle" was just a BMX belonging to Ariana's friend Richard? Nope, it really is about shagging. "That whole song is about riding leading to soreness," says Ariana. So there you go.

The Weeknd – I Can't Feel My Face

My, doesn't The Weeknd sound all loved up and besotted with the lady who's the subject of this song? Although she sounds like she may be a little bad for him, tbh – and that's because she is not a lady, but drugs. Oh. That explains a lot. The Weeknd has admitted to overdoing it in the past, and this song expertly and sneakily explains what it's like to be trapped in a codependent relationship with the gear.

Writing a song about a movie star may sound like a very good excuse to meet one – which did happen, in a pub, when this track was a hit – but the original members of Bananarama have revealed that this Number 3 hit from 1984 is much more serious. "The lyrics were much darker than you’d imagine," Siobhan Fahey told the Guardian in an interview to commemorate the band's reformation. "Robert De Niro’s Waiting is about date rape." And when you listen again, yep, you can totally hear it, although the message was toned down for the video to get airplay.

Many different versions of the story about how the song came by its name exist – the most prominent one claims Cobain took the title from graffiti left on his bedroom wall by punk band Bikini Kill singer Kathleen Hanna. She scribbled "Kurt smells like teen spirit" in reference to a girl Kurt was dating at the time – who wore a deodorant called Teen Spirit. Lucky she wasn’t wearing something with a less glamorous name, really – like aqueous cream or calamine lotion.

Katy Perry – Chained to the Rhythm

On the surface of it, Katy's triumphant 2017 return might sound like the usual dancefloor fodder, but this is actually "woke pop", and it's not energy drinks keeping Katy wide-eyed – it's the state of the world. It's about everyone being isolated from the problems of the world and being engrossed in their own pleasure.

Taylor Swift – I Knew You Were Trouble

When released in 2012, there was intense speculation – as ever – about which of Swifty’s former beaux the song was about. Although she had recently broken up with One Direction’s Harry Styles, the dates didn’t quite add up – except Taylor and Harry actually did meet way before they got together and the rumour mill started doing its inevitable thing. Taylor pretty much confirmed it following her spirited 2013 BRIT Awards performance when she said: “It’s not hard to access that emotion when the person the song is about is standing by the side of the stage watching”. Harry seemed to take it pretty well, and congratulated Taylor on her performance.

Ever wondered what she means when she says she’s “bluffin’ with her muffin”? Well, no prizes for what the muffin is, but Gaga has said the song as a whole is about bisexuality. At a live gig in 2009, she told fans the song was about being out with a man but wanting to be with a woman. So now we know.

5 Seconds Of Summer – She Looks So Perfect

All 5SOS needed to pen this instant classic was a photo!

The guys went to a recording session in LA with a guy called Jake Sinclair, who has a girlfriend he doesn’t see that much. Missing his ‘boo’, Jake showed the guys a picture of his girlfriend and an idea he had for the song and, well, the lady in question must’ve been looking pretty fine as the result was She Looks So Perfect.

On first listen, this one sounds fairly straightforward, right? Our Shawn begging his lady for another chance. But no. It's not about a girl at all. Shawn has revealed the song actually refers to… his career. Being a popstar is pretty relentless, according to the Canadian, fave, and Merct is all about getting a little bit of time to himself.

While ‘50s movie legend Grace Kelly gets the title, it’s not about her at all! Beirut-born BRIT Award winner Mika said the song is about trying to get signed to a record label when a music executive suggested he change his style to be more like R&B singer Craig David.

Mika wasn’t having any of it and wrote Grace Kelly go show that while he could be anybody you wanted him to be if he really tried, in the end he could only be himself.

Justin Timberlake – Cry Me A River

Way back in the mists of time, when wearing a denim ballgown was perfectly acceptable behaviour, Justin Timberlake and Britney Spears were pop’s golden couple. But then they broke up, and Justin got busy scribbling down some feelings.

JT never directly claimed the song was about Britney, its video featured a pretty blond girl in a hat who looked and walked just like Britney. So, erm, you know. Britney was offered the chance to get her revenge when the song Sweet Dreams My LA Ex was written for her, but she decided to turn the other cheek. Dignity, darling – that's how the pros do it.

Just as the song goes, the very pretty Jolene had “flaming locks of auburn hair, with ivory skin and eyes of emerald green”, and she worked in the bank and turned the head of Mr Dolly Parton (possibly not his real name). Dolly wasn’t having any of that and so decided to tell Jolene what was what. It all ended well for Dolly, as Jolene took her flaming locks of auburn hair elsewhere, while Dolly and her man stayed together.

As Dolly says: “Had it not been for that woman I would never have written Jolene and I wouldn’t have made all that money, so thank you Jolene.”

However, in an interview many years ago, Dolly claimed that the inspiration behind the song was a pretty little girl who came backstage and asked for an autograph. We think we prefer the other version!

Bey’s big ballad was sneakily written by OneRepublic’s Ryan Tedder while his wife was out. Some background: Ryan had injured his Achilles heel – yes, it is a real body part – playing sport and was in major pain. As a result, his wife banned him from doing any work until better.

But when Beyoncé got in touch, Ryan couldn’t say no. So when Mrs Tedder popped out, Ryan texted his songwriting pal Evan Bogart to come over. They came up with the bulk of Halo in three hours.

Lorde was flicking through a copy of cultural magazine National Geographic when she spied a photo of baseball player signing autographs for fans – on his shirt was the word “Royals”. From there Lorde ran with the theme and her love for all things regal and turned it into a Number 1 single, becoming the youngest solo artist to go straight in at the top of the Official Singles Chart since Billie reached the summit aged 15 with Because We Want To in 1998.

Got any more songs that have interesting, weird or wonderful stories behind them? Get busy on the comments below or give us a shout on Facebook or Twitter.