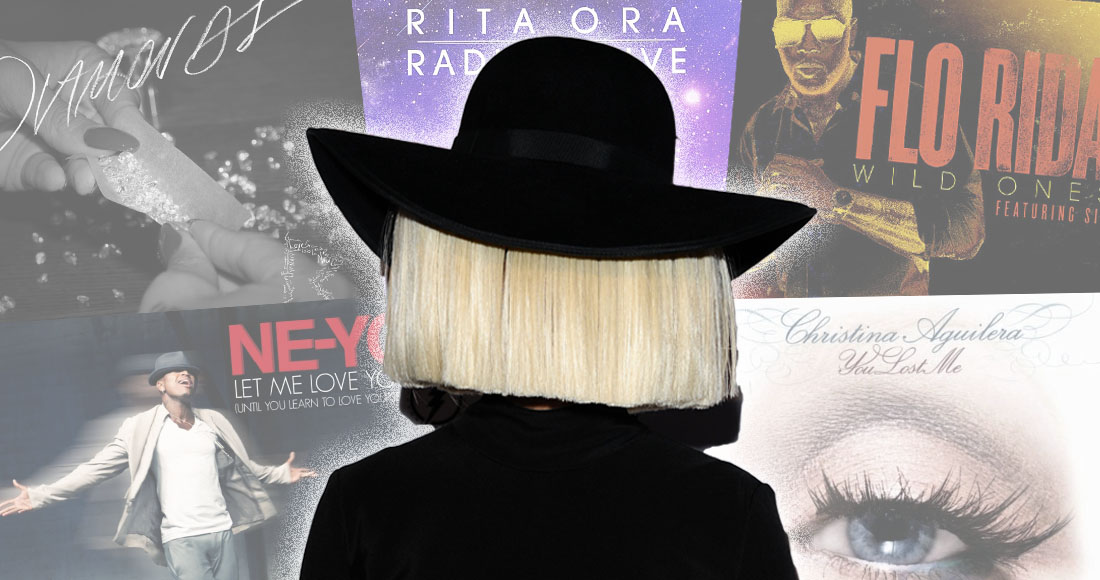 After years as every pop lovers' favourite secret, Sia finally hit the big time in 2011 when she guested on David Guetta's Titanium - a track she penned but didn't actually intend to perform on (it was first offered to Katy Perry and also recorded by Mary J Blige).

Since then, the Aussie singer-songwriter has been involved with some mighty hits – both from her own solo career and as the mastermind behind smashes for pop's biggest stars.

MORE: See where all of Sia's singles and albums have charted in the UK

She's just released her seventh studio album This Is Acting, a collection of songs which, although sung brilliantly here by Sia herself, were penned with other singers in mind (including Rihanna and Beyonce) but for whatever reason didn't end up with their intended owners.

To mark its release, we count down Sia's Official Top 10 biggest songs; both those she sings herself, and the ones she gave away...

When it comes to songs where Sia's doing the singing, her biggest song is a very big one indeed. Titanium, which she wrote and featured on with David Guetta, hit Number 1 in 2012, and has notched up chart sales of 1.38 million, combining downloads and streams. It's the biggest Sia-related song overall.

Runner-up is the mighty Chandelier, which Sia wrote with Rihanna and Beyoncé in mind. Lucky she kept it for herself; it was her first Top 10 with a solo credit for over 14 years and has racked up a chart sales tally of 982,500 to date.

Her third biggest track as a performer is her 2012 team-up with Flo Rida, Wild Ones. It might have missed the Top 3 (peaking at Number 4), but has an impressive 813,000 chart sales to its name.

Sia's Official Top 10 biggest songs appears below. Special mention goes to her (uncredited) feature on Zero 7's Destiny, which finishes just outside the Top 10 at Number 11.

Sia's not possessive when it comes to the tracks she writes; she's more than willing to share the love. And when she does, the results are pretty huge.

Ne-Yo's most recent chart-topper Let Me Love You (Until You Learn To Love Yourself) also had its own share of Sia magic - it's her second biggest song as a writer, with combined sales of over 450,000.

Other big songs Sia's had a hand in include Jessie J's Flashlight (305,000 combined sales) and Beyoncé's Pretty Hurts (111,000); the latter reportedly being one of 60 songs she wrote for the superstar's recent album.

Two Christina Aguilera tracks make the Top 10 – Bound To You from her Burlesque movie soundtrack and You Lost Me from her 2010 Bionic album - the song that arguably made the wider world sit up and notice Sia's songwriting talent.

The Official Top 10 songs written (or co-written) by Sia: