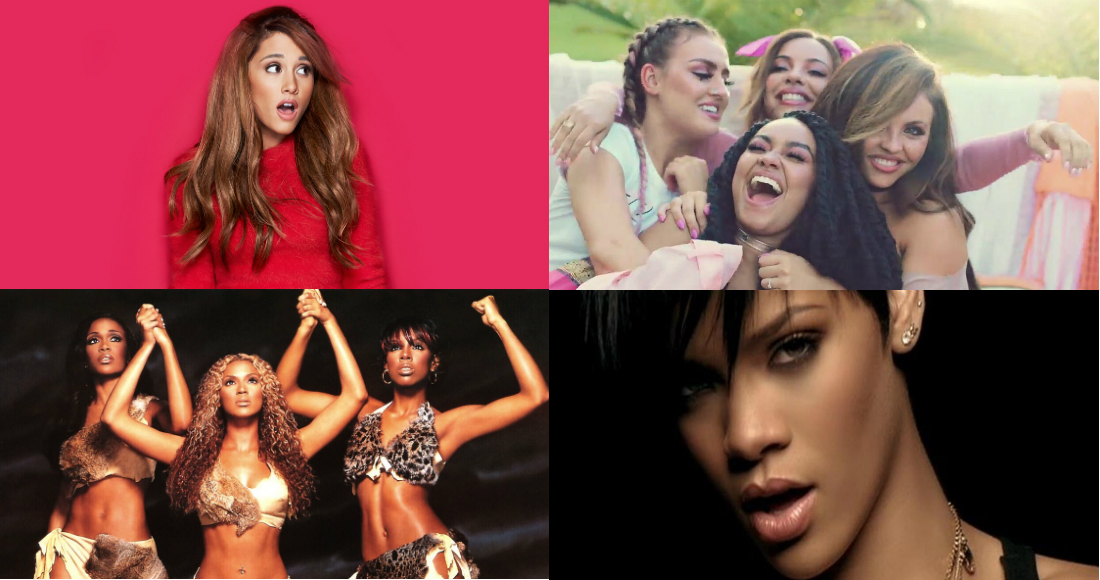 Breaking up is very hard to do, of course, but when you're a popstar it's the ideal opportunity to bag a Number 1.

What better way to get over your ex than write a song about how rubbish they are and that you never want to see them again – the sassier, the better.

The latest ballsy breakup song to top the charts is Little Mix's euphoric Shout Out To My Ex, which or may not refer to Perrie's ex Zayn. (It does.) Addressing all the "hate yous and the tattoos", Shout Out To My Ex isn't pulling any punches. Go ladies!

To mark the return of the sassy breakup banger to Number 1, we look back at other vengeful tracks to hit the top.

Want to kick a loser to the kerb and make sure he gets the message? Easy peasy, just grab a mate and collaborate on a searing putdown that doubles up as a solid-gold bop. As Iggy says, "the best thing now is probably for you to exit". OUCH. One Problem Iggy and Ariana didn't have was taking this track to Number 1, which they did with ease in 2014, making them the first chart-topper to include streaming.

OK, so yes, this is a ballad and, yes, technically ballads don't tend to be bangers but you need to respect the lyrics on this one. It proves slow songs can bang, especially with choice lyrics like "You're so ugly when you cry". Whoa! Someone gets us to the local burns unit right now – we're in a critical condition. Take a Bow hit the top in 2008.

Breakup songs are often a subtle way of saying F-you, but vague symbolism was not on the agenda for New Yorker Eamon when he released his smash hit F*ck It (I Don't Want You Back). Using the F word no fewer than eight times in the chorus alone, the song was soon followed by a reponse song from a woman claiming to be Eamon's ex. Step forward Frankee with FURB (F*ck You Right Back). of course it was all a ruse and the pair weren't exes at all, but between them they held on to Number 1 for seven (long) weeks in 2004. Listening to Eamon's track in particular is proper time-capsule stuff – it's unlikely he'd get away with that kind of thing now. Or maybe nobody would give a f*ck!

We're back at the F word again for Cee-Lo's brilliantly bitter and twisted buh-bye, laughing off a potential heart attack with a jaunty "Although there's pain in my chest I still wish you the best with a f*ck you". Forget You (as it was renamed so your mum wouldn't get embarrassed when it came on a taxi radio) spent two weeks telling everyone to go F themselves in 2010.

"I guess I just lost my husband; I don't know where he went" as an opener makes it pretty clear early on that Pink is not messing about here. This was an autobiographical take on her split from husband Corey Hart, who very kindly agreed to appear in the video, which has to be a first for the subject of a breakup song. It worked its magic on the charts, hitting Number 1 for three weeks in 2008, plus it cast a spell on Pink's marriage – she got back with Corey eventually and they're still together!

Not all breakups are affairs of the heart, sometimes it's all about the business. Shedding a total of three members in the space of a year, Destiny's Child had some demons to exorcise on this 2001 chart-topper, and boy did they! Rather than insult their targets, Bey, Kelly and Michelle instead stuck to keeping it classy. "I'm not gon diss you on the internet, cause my mama taught me better than that" is just one of the absolute standout slamdowns. WHAT? indeed.👏

MORE: See all Destiny's Child's bangers and ballads and hit albums in their archive

Not all sassy breakup songs have to sound aggressive or harsh. On this classic Number 1 from 1979, Blondie's Debbie Harry sings so sweetly, you hardly realise she's talking about ditching a useless lover. Each "ooh ooh ooh-oh" is a death sentence delivered with a sweet smile. Amazing. Not to mention the then-very risqué lyric: "Once I had a love and it was a gas, soon turned out to be a pain in the ass". Consider yourself told.

No Doubt's Don't Speak, which was based on Gwen's actual breakup with bandmate Tony, was the band's first hit and spent three weeks at the top in 1997. Gloria Gaynor's I Will Survive, a gay anthem, certainly didn't lay down and die, hitting Number 1 for a month in 1979. Oh, and who can forget Nicole Scherzinger's brilliant respiratory awareness classic Don't Hold Your Breath, which gave Scherzy her first solo Number 1 in 2011?

Sadly, not all breakup bangers can elbow their way to the top of the Official Singles Chart, so let's hear it for some other classic kiss-offs.

Beyoncé's Irreplaceable ended up slightly "to the left, to the left" of the top spot, hitting Number 3, but it accurately portrayed deception, heartbreak and the often-overlooked real-life breakup issue of car ownership disputes. It's Beyoncé's Jag, mate; jog on.

Taylor Swift's We Are Never Ever Getting Back Together was a subtly titled hit in 2012, while Kelis's Caught Out There explored the, erm, angrier side of breaking up in 1999 – "I hate you so much right now AAAAAAARGH" is pretty straightforward telling you you're a bit of an a-hole, isn't it?

Elton John gave his ex both barrels with the sassy, yet super positive "I'm better without you" vibe of I'm Still Standing in 1983, and we can't let this list end without mentioning queen of kiss-offs, Kelly Clarkson. Since U Been Gone, Stronger, Mr Know It All – Kelly's known some real morons in her time, and has beautifully dispensed with each and every one. 👑