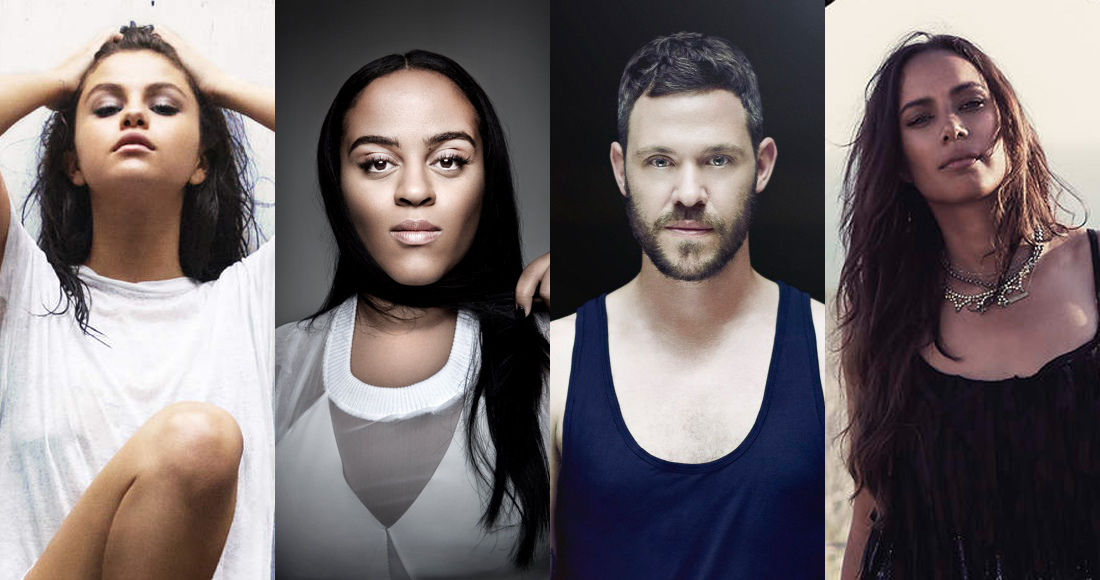 We’re just over halfway through the year, and while when it comes to singles, we’re all about that holy Top 40, some tracks, for whatever reason, don’t make it.

It doesn’t mean it’s a bad song or artist. Sometimes they’re just unlucky, others it’s as simple a fact as, that week, everybody liked the other songs a bit more.

But we wouldn’t want you to miss out, so that with that in mind, just for a change, we’re looking a little outside the Top 40 at some of the biggest songs of the year that missed out on a placing. Just goes to show… it really is all down to you.

Oh, and these are in no particular order, of course.

There was huge excitement around the return of super-producer Giorgio Moroder, the mastermind behind million-selling Donna Summer track I Feel Love, along plenty of others, and contributor to Daft Punk’s hit album Random Access Memories.

At 74 years young, Giorgio enlisted a host of stars for his comeback project, including Britney Spears, Kelis and Kylie Minogue. That extra tough of pop glitter did the trick and Déjà Vu became his first album to chart in the Top 40 in June 2015.

Buzz single Right Here Right Now feat. Kylie introduced the album promo but missed the Top 100, as did the uplifting title track with Sia in full on “belting it out at the disco” mode.

Created from the ashes of girlbands Mini Viva and Duchess, plucky R&B group M.O had a near miss this year with their 90s-tastic Preach.

Despite tinges of TLC and tight dance routines, Preach didn’t make it to the Top 40, landing at Number 51. It’s the second time M.O have come within sniffing distance of the Top 40 – Dance On My Own peaked at Number 49 in 2014. So. Close.

Will it be third time lucky with the next release? We’ve got everything crossed!

3. Leona Lewis – Fire Under My Feet

Last time we saw Leona was in 2013, when she was brightening up our Yuletide no end with the delightful One More Sleep. Skip forward a year and a half and Leona was asserting her independence and set to release her first new music since parting company with her record company.

The rousing Fire Under My Feet, an energetic cross between Adele and Avicii, saw Leona dealing with her demons and starting afresh. While the track didn’t make the Top 40, reaching Number 51 in the first week of release, Leona’s set to release her fourth album I Am in September, which includes a song written by queen of the ballads Diane Warren.

Thanks to a show-stopping performance (almost literally) at the BRIT Awards, Madonna staged a comeback to the Official Singles Chart with Living For Love, the lead track from album Rebel Heart, reaching Number 26.

Its follow-up Ghosttown was first heard in December 2014 when, to combat hackers on the brink of leaking Rebel Heart in its entirety, Madonna rushed out six of the album’s tracks so fans could listen to them as she intended.

As it had already been around a while, and despite a guest appearance from cult TV show Empire’s leading man Terrence Howard, Ghosttown didn’t score a place in the Top 100. Diplo, who worked with Madge on Rebel Heart, thought the track deserved a bit more attention.

“It already sucks to be a woman in the music industry, but to be a boss woman is even harder,” the DJ producer told Rolling Stone. “She sold out her tour in minutes, but no one seems to want her to succeed. Her song ‘Ghosttown’ was a guaranteed Number One for anybody else, but she didn’t get a fair shot.”

Follow-up Bitch I’m Madonna also went under the radar, but the album peaked at Number 2, so it’s not all bad news.

From one Ghosttown (all one word) to another (albeit with two words – do keep up). Adam Lambert staged a huge comeback earlier this year with his third album The Original High. It was a big success, reaching Number 8 to give the king of the Glamberts his first UK Top 10 album.

Despite plenty of buzz and lots of fan support, the moody, unpredictable Ghost Town didn’t crack the Top 40. Instead, the track had to make do with a peak of 71.

She’s had four Top 10s, including a Number 1 debut with Goodies, and earlier this year Ciara made her return with I Bet.

I Bet had everything: a slick slow-jam sound and a video featuring Ciara in the cleanest leg warmers you’ll find this side of dance class, but it couldn’t pirouette its way into the Top 40. Number 56 was as far as I Bet would go.

After winning a clutch of awards in her native Sweden, Seinabo Sey made her debut assault on the UK singles chart earlier this year with electrifying Younger.

The Kygo remix of the track had hit Number 1 in Norway, but in the UK Younger missed the Top 40, landing at Number 61.

Luckily, despite the subject of the song ("OMG look how old we’re all getting", basically), there’s plenty of time for Seinabo to score a hit.

Longlisted for the BBC Music’s Sound of 2015 poll, Manchester-born Shura looked a shoo-in for  hit with her Janet Jackson-esque slow 2Shy.

On the bright side, Shura’s debut album is slated for release later this year.

Speaking of JJ, our very favourite member of pop royalty ended what felt like decades of silence earlier this year. Announcing a new album and world tour, Janet dropped her first single in over five years, No Sleeep, a ‘90s-style jam with Janet’s signature breathy vocals and a killer bassline.

The megastar enlisted the help of J Cole, who wasn’t even 1 year old when Janet scored her first Top 10 hit, but so far the track hasn’t broken the Top 40. But thanks to a slick video and the album being on its way, we reckon it might not be all over for No Sleeep just yet.

A change in direction for Selena, last seen as Taylor Swift’s nemesis in the Bad Blood video, the star dialled things back after her dancey collaboration with Zedd, I Want You To Know.

Good For You, which is moodier than Lana Del Rey’s eyebrows and wouldn’t sound out of place on one of her albums, features A$AP Rocky and almost made it to the Top 40, reaching Number 47.

Good For You is still lingering around the low 50s of the Official Singles Chart – is there time for it to nab a Top 40 slot?

As a teaser for what would become his fourth Number 1 album, 85% Proof, Love Revolution saw Will Young change tack and go retro on us.

In this ‘60s-style track, Will even managed to weave in a bit of a techno song in the chorus – Tomcraft’s Number 1 banger Loneliness. Now, you weren’t expecting that were you?

Have we missed any out? Which songs of 2015 do you reckon should have made the Top 40? Lay down your vocals on Facebook, Twitter, or maybe try a remix in the comments below.

Wouldn't it be great to listen to all these songs right now? Yep? Well here's a playlist: