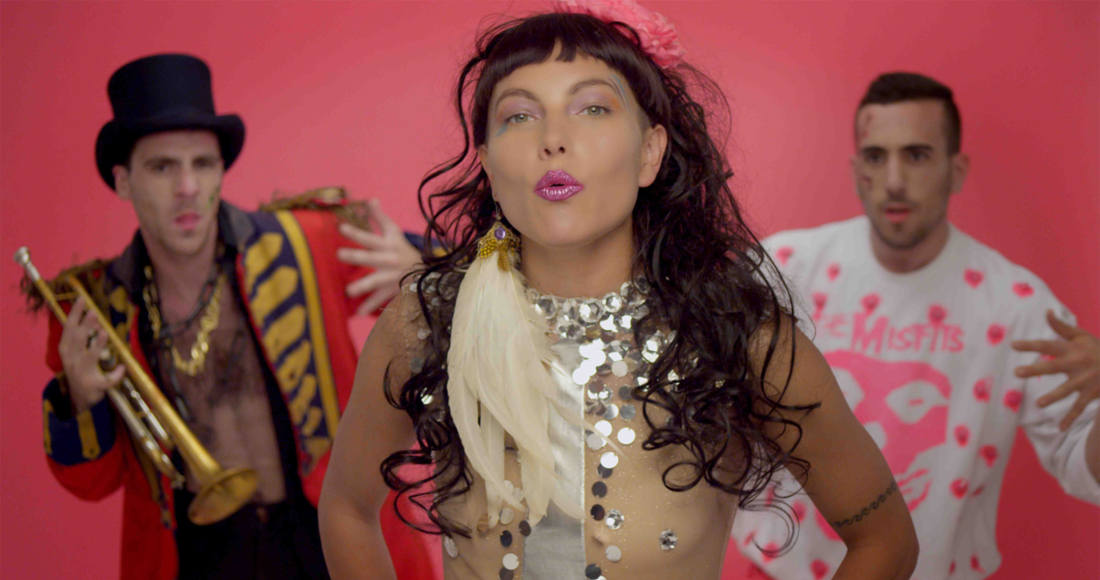 Sam And The Womp look set to make a huge dent in this weekend’s Official Singles Chart. The colourful bunch of party misfits steal the lead over current chart topper Rita Ora’s How We Do (Party) in this week’s Number 1 race with debut single Bom Bom.

You may have heard Bom Bom’s giddy brass-adorned bass beats soundtracking this summer’s coverage of the London 2012 Olympic Games, or accompanying the recent Southern Comfort TV ad, or perhaps you stumbled upon them causing mayhem at Secret Garden Party Festival, Glastonbury or Lovebox. Love it or loathe it, there's no escaping Bom Bom’s credentials as possibly the most infectious earworm of a pop tune since Carly Rae Jepsen's Call Me Maybe.

Fronted by vocalist Lady Oo and trumpeter Sam Ritchie, Sam And The Womp! is an enigmatic big band collective based in London with roots spread as far Israel, Italy and the Netherlands. Claiming influences as diverse as The Prodigy, Jazzsteppa, The Skatalites and Goran Bregovic, their sound defies easy categorisation.

OfficialCharts.com caught up with the band this week to get to the bottom of pop all-important questions of the week - what is WOMPING? Is WOMPING safe? What is the best WOMP you’ve ever had? And, which celebs have been caught having a cheeky WOMP? Sam tells OfficialCharts.com

“The WOMP is the space between the bass and your face. Anybody can WOMP, from age 1 to 99. We’ve had nice grandmas and grand-dads womping at a jazz concert we did, we’ve had little toddlers womping, but of course it’s the teenagers and students who like to ‘have it’, have a proper party and really give it the FULL ON WOMP!”

Watch the video interview below:

There are five new entries making an appearance in today’s Official Singles Chart Update Top 40. Led by Sam And The Womp (1), Devlin could be in line for his highest charting single to date as the Dagenham MC teams up with Ed Sheeran to cover Bob Dylan’s (All Along The) Watchtower (5), with US pop princess Taylor Swift returning with We Are Never Ever Getting Back Together (6).

Outside of the Top 10, Canadian pop punkers Simple Plan are on course to score the first UK Top 20 of their career with Summer Paradise featuring Sean Paul, the track is taken from the band’s latest studio album Get Your Heart On and is at Number 11 today. Muse’s Madness completes today’s new entries at Number 33.

Public Enemy’s Harder Than You Think, the soundtrack to Channel 4’s Paralympics ad campaign, is the week’s highest climber, up 42 places midweek and breaking into the Top 20 for the first time at Number 14. Harder Than You Think is taken from Public Enemy's 20th anniversary album How You Sell Soul To A Soulless People Who Sold Their Soul?.

This week's Official Singles Chart Update Top 40 is as follows: