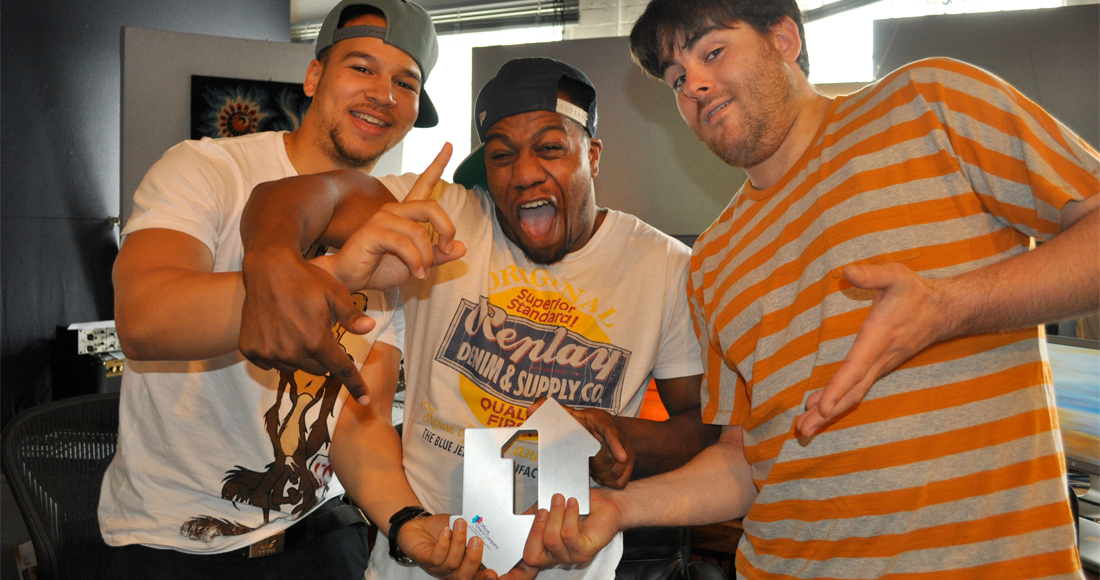 The Hackney-based four piece smash their way to a self-proclaimed surprise mainstream victory today, seeing off competition from Fun FT Janelle Monae's We Are Young (Number 2) by 23,000 copies, as well as today's highest climber, Swedish Eurovision winner Loreen's Euphoria up 82 places to Number 3.

However, Rudimental confess it's not all glamour for the band just yet!

Band member Piers Agget told OfficialCharts.com that he attempted to buy the band's single when it was released last Sunday, but his bank card was actually declined.

"We may be Number 1 on the Official Chart, but at the moment I haven't got much money. I tried to buy the download on Sunday, but it didn't work, so I had to borrow money off Kesi's mum!"

To which Rudimental bandmate Kesi Dryden chipped in, "You're not meant to say that 'cause I haven't told her it was for you! She'll know now!"

A surefire summer anthem, Feel The Love features a soaring trumpet break and the stunning soulful vocals of John Newman, whilst becoming only the second drum 'n' bass track ever to top the Official Chart. (The first was DJ Fresh FT Rita Ora's Hot Right Now back in February of this year.)

The track has already won endorsement from heavyweights of the airwaves, having premiered as the Hottest Record in the World on Zane Lowe's Radio 1 show and with subsequent plays from Annie Mac and Mistajam - who declared it a "certified banger".

Rudimental have announced a string of touring dates, taking in the likes of Fabric and The Arches as well as festival appearances at Creamfields, SW4 and Outlook – Rudimental's 2012 takeover is in place.

Guitar-pop newcomers Lawson not only sold out a headline UK tour BEFORE the release of their debut single, their live shows are becoming famed for regular stage invasions by their crazed female fans and now their epic first single When She Was Mine has sent the four-piece soaring straight into the Top 5, on course for a Number 4 this Sunday.

The track is produced by John Shanks, the Grammy Award winning producer of Take That’s albums Beautiful World and The Circus, When She Was Mine is about a broken heart - Lawson frontman, Andy Brown, wrote the song after finding out that his ex-girlfriend had a new boyfriend.

Gary Barlow and the Commonwealth Band land at 11 with Diamond Jubilee song Sing, (the album from which it was taken, Sing, today tops the Official Albums Chart.) Sing was co-written by Gary Barlow and Lord Lloyd Webber. The two British musical icons were approached by Buckingham Palace to write a commemorative song for the forthcoming Diamond Jubilee celebrations.

The song was to bring together the sound of the Queen’s Commonwealth. Gary travelled around the Commonwealth countries of Australia, Kenya, Jamaica and the Solomon Islands, his main criteria was to recruit undiscovered musicians who showed a real passion for music. Recording most artists locally on a laptop, including the UK’s very own Military Wives Choir, before the final elements were recorded and mixed at the legendary Abbey Road Studios. Sing even features a cameo appearance from Prince Harry on tambourine! Read our interview with Gary Barlow here, which he suggests his experiences in the making of Sing will influence the next Take That album.

Elsewhere, DJ/producers Sebastian Ingrosso & Alesso are new in at Number 19 with Calling (Lose My Mind), while Alexandra Burke’s Let It Go (33) and Justin Bieber’s Die In Your Arms (34) complete the Top 40 new entries today.

And finally, John Lydon’s dismissal of the Facebook campaign to get Sex Pistols’ God Save The Queen to Number 1 for the Jubilee has clearly had an impact as the track fails to break Top 40, closing the week at Number 80.