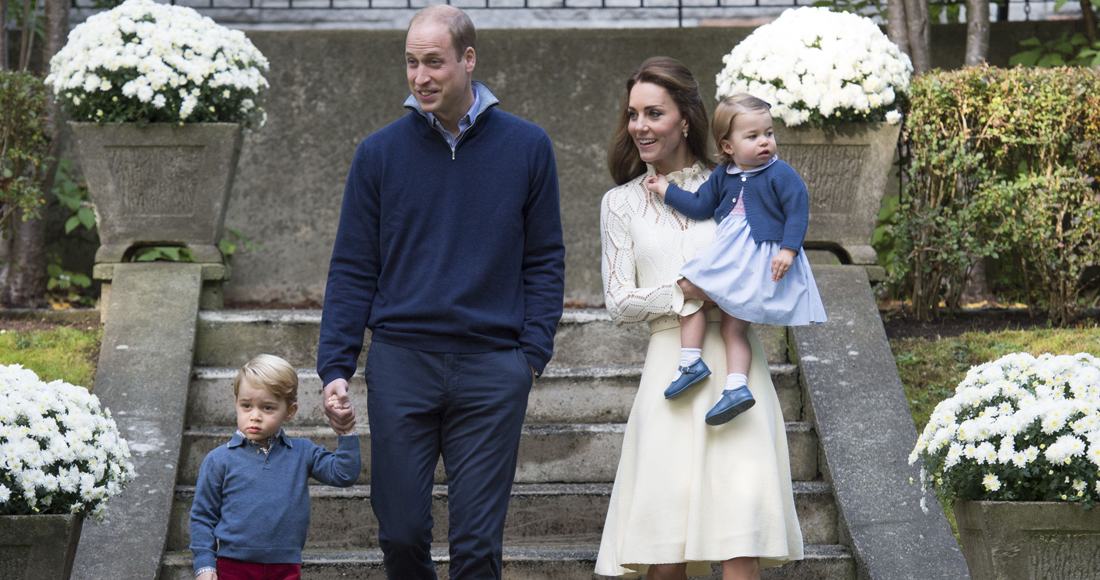 The day any baby is born is a pretty unforgettable one: The waiting, the nerves, the joy, the tears – the gas and air. But one particular baby’s birth has been getting a lot of attention – yes, the Royal baby has arrived! And it's a little boy weighing in at 8lbs, 7oz.

Just like any other little person, his Royal Babyness will eventually start asking those difficult questions: 'How did I get here?', and the most important one of all: 'What was Number 1 when I was born?' It’s the ultimate icebreaker, the question we should all know the answer to and – thanks to OfficialCharts.com – it has never been easier to find out.

Will it be a classic track that still gets played on the radio? Or will it be an embarrassing novelty record? Calvin Harris and Dua Lipa's One Kiss is the current reigning Number 1 for the Royal family's latest addition - let's take a look at some more...

When it comes to classic Number 1s, they don’t get much better than this. Kate’s Birthday Number 1 was Human League’s first and only Number 1 single, and was their fourth Top 10 that year. The stylish video, which features the band members pouting moodily and looking very swish, oozes glamour, much like Kate herself. Despite being over 30 years old, Don’t You Want Me is still played in pubs and bars and is a karaoke staple. So, like Kate, massively popular.

Some one-hit wonders fade into obscurity, others have staying power. Charlene’s cautionary tale to ladies everywhere about the dangers of overseas travel and not meeting ‘the one’ spent only a single week at the top spot. William seems to have ignored Charlene’s advice altogether: he’s globetrotted extensively and managed to meet the love of his life. Take that, Charlene.

WEEKS AT NUMBER 1: Just the one.
ANY MORE HITS? Charlene never again graced the Top 40 .
CHART FACT: I’ve Never Been To Me was originally recorded and released in 1977, but wasn’t a hit. It was picked up by a local radio DJ in Tampa, Florida in 1982 and got such a positive response, it became a worldwide hit.

When the world welcomed the arrival of Prince George, Avicii was dominating the Official Singles Chart with Wake Me Up. The rousing, EDM-meets-folk number soared straight to Number 1 and became the fastest-selling single that year. Tragically, the Swedish DJ died aged 28 last week (April 20), cutting short what was shaping up to be a hugely successful career.

WEEKS AT NUMBER 1: Three.
ANY MORE HITS? Avicii scored 12 Top 40 hits, nine of which peaked inside the Top 10.
CHART FACT: Wake Me Up wasn't only the fastest-selling single of 2013; it went on to become one of the best-sellers of all time, shifting 1.5 million to date.

PRINCE HARRY: Stevie Wonder, I Just Called To Say I Love You (15 September 1984)

Thanks to a recording career which spans almost five decades, Stevie Wonder has a lot of hits under his belt, yet it was this bright, poppy ditty that gave him his only solo Number 1, and one of the Top 20 biggest selling singles of all time here in the UK! I Just Called To Say I Love You came way before we were all glued to our mobile phones moaning about how many carbs we’d had that day, and spreads the message that the odd phonecall to say “Hiya!” doesn’t do you any harm. Harry’s most famous run-in with a mobile phone saw him snapped in the buff in Las Vegas playing a drinking game, so the less we say about that the better, really.

WEEKS AT NUMBER 1: Six.
ANY MORE HITS? Stevie went on to have eight more Top 40 hits, mainly as a featured artist.
CHART FACT: Stevie’s first Number 1 was a duet with Paul McCartney, Ebony and Ivory, which promoted peace and equality. It spent three weeks at Number 1 in April 1982 and many decades in our heads as one of the catchiest songs ever.

The early ‘80s had more mascara and lip gloss than an entire series of Jersey Shore, and that was just the boys. Leading the lipstick lads was cheeky scamp Adam Ant, who, with his band The Ants, was causing something of a stir on the New Romantic scene with his brand of shouty, punky pop. Stand and Deliver was a pretty big one – the first of three Number 1 hits he’d have within the year. The track’s video features Adam as famous highwayman Dick Turpin, who would’ve been lost without his trusty horse. Zara, of course, is a champion showjumper and Olympic medallist so… well, we’re sure you can see where we’re going with this one.

WEEKS AT NUMBER 1: Five.
ANY MORE HITS? Yep, ten more Top 40 hits were to come.
CHART FACT: After another Number 1 with Prince Charming, Adam decided there was only room for one ant in his ant farm, so ditched the band and went solo, enjoying one more chart-topper with Goody Two Shoes in May 1982.

The Queen’s first grandchild was a pretty big deal indeed, and a big deal deserves a big Birthday Number 1. So who better than Swedish pop royalty ABBA to provide one? The Name of the Game was a sixth Number 1 for Frida, Benny, Bjorn and Agnetha, and came in the middle of a run of three consecutive chart-toppers. There are few people in the world who don’t know an ABBA song, but Princess Anne’s son has pretty much shunned publicity, living quietly with his wife Autumn and two daughters and working in sports management. He’s the Royal Family’s Agnetha!

WEEKS AT NUMBER 1: Four.
ANY MORE HITS? You’re kidding, right? They had 17 Top 40 hits after The Name of the Game, including a 2004 showing for the first ever Number 1, Waterloo.
CHART FACT: ABBA had nine Number 1s over their career, spending a total of 31 weeks at the top of the charts. That’s, like, seven months! With such a vast sea of hits in their arsenal, it’s no wonder that their greatest hits collection ABBA Gold has since gone on to leapfrog The Beatles’ Sgt Pepper to officially become the second biggest selling album of all time in the UK!

OK, so she’s not strictly a Royal, but she very nearly stole the show at her sister’s wedding, so we thought we’d give her a nod here. UB40 are no strangers to a bit of attention-hogging themselves. Red Red Wine was originally a Top 40 hit for Jimmy James & the Vagabonds in 1968, peaking at Number 36. UB40 topped this, of course, covering the track and taking it all the way to Number 1 in 1983 and becoming the definitive version for a generation. Talk about stealing all the glory – we’re sure Pippa would never dream of such a thing...

WEEKS AT NUMBER 1: Three.
ANY MORE HITS? Tonnes! They’ve had 31 Top 40 hits since, some as a featured artist.
CHART FACT: UB40 have hit Number 1 two other times, both with cover versions: I Got You Babe with Chrissie Hynde in August 1985 and (I Can't Help) Falling In Love With You in May 1993. UB40 didn’t manage any scene-stealing here; both the originals had already hit Number 1 on release. Sonny and Cher took I Got You Babe to the summit in August 1965, while Elvis Presley and the Jordinaires reached the top with Can’t Help Falling In Love in February 1962.

The birth of Prince Andrew’s first child had been eagerly awaited by the press, but Princess Beatrice’s Birthday Number 1 seemed to come from nowhere. Yazz had previously featured on house act Coldcut’s Top 10 hit Doctorin’ The House, but The Only Way is Up was the surprise hit of a hot summer, keeping Kylie Minogue’s The Loco-Motion off the top of the charts. Yazz’s peroxide blond crop was pretty distinctive, and Princess Beatrice has a special place in our hearts for her outstanding headgear choices. Remember that hat at Wills and Kate's wedding?

WEEKS AT NUMBER 1: Five.
ANY MORE HITS? Yazz managed two more Top 10 hits with Stand Up For Your Love Rights and Fine Time, but hasn’t had a Top 40 hit in 20 years.
CHART FACT: The Only Way Is Up was actually a cover version and ended up as the second biggest selling record of 1988. The first? Cliff Richard’s Mistletoe And Wine. Oh yes.

PRINCESS EUGENIE: Beats International, Dub Be Good To Me (23 March 1990)

Just like her big sister’s Birthday Number 1, Princess Eugenie’s personal chart-topper sprang out of nowhere to be a smash for ex-Housemartins’ bass player Norman Cook and his gang of musicians, including singer Lindy Layton. The heavy reimagining of the 1984 Number 13 hit by SOS Band was the sole chart-topper for this Norman Cook project, but he managed another in his reincarnation as Fatboy Slim with Praise You in 1999. And, of course, inspired by the later Top 5 reworking of the track by Professor Green and Lily Allen, back in 2010 a young Cher Lloyd also paid homage to the song, and in the process was responsible for possibly one of the fiercest X Factor live show performances ever. Work it.

WEEKS AT NUMBER 1: Four
ANY MORE HITS? As Beats International, only one more Top 40 hit, Won’t Talk About it, was to come. But as part of Freak Power, Pizzaman, Mighty Dub Katz and under the moniker of Fatboy Slim, he’s notched up plenty, including a Number 1 with Praise You.
CHART FACT: Norman’s first ever Number 1 was with the Housemartins. Caravan Of Love reached the top in November 1986.

Want to know what was topping the charts on the day the stork brought you? Select ‘Charts’ at the top of the nav bar and enter your birthdate you'll be presented with the full Official Singles Chart from the day you were born.