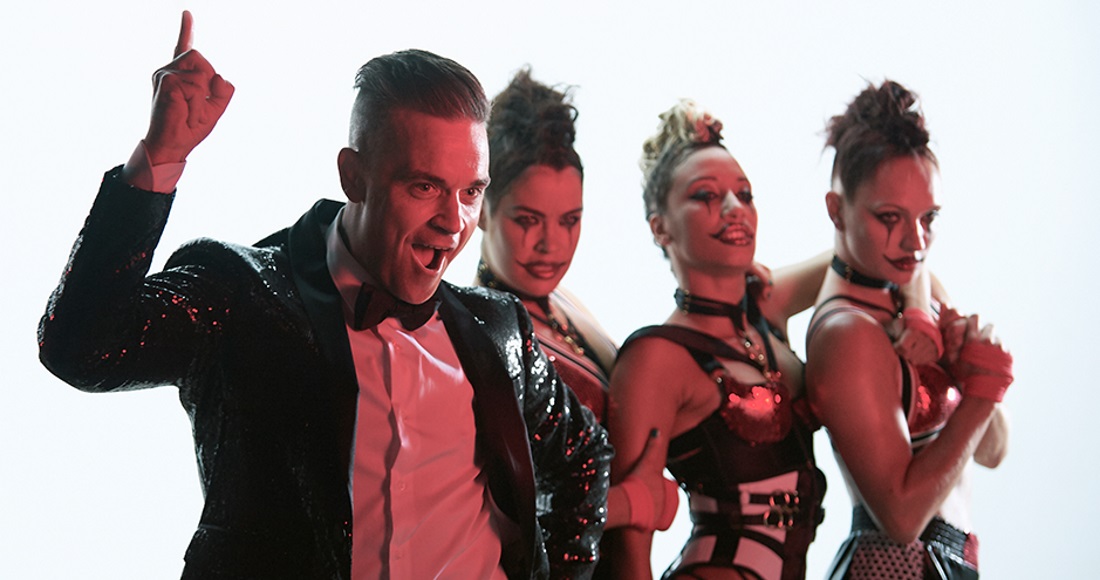 The world of pop would be a duller place without Robbie Williams, and that's why we're glad he is back back BACK with his first new album in three years, The Heavy Entertainment Show.

In a solo career spanning 20 years, Robbie has scored 34 Top 40 hits, of which 31 went Top 10, with seven of those going all the way to Number 1, and what's more, this week he's set a new chart record on the albums front too - Robbie officially becomes the most successful British solo act in Official Albums Chart history. What better way to mark his triumphant return than with a look back at his biggest sellers.

Before we show the whole Top 40, here are some highlights:

Out in front is the song that saved Robbie's solo career and also proves you don't have to get to Number 1 to be a massive, much-loved song. Angels stalled at Number 4, but has sold over 1.2 million copies, was voted the best song of the previous 25 years at the 2005 BRIT Awards and is apparently the song most Brits would like played at their funeral. Angels, you see?

At 2, it's Robbie's most recent Number 1, written with his old Take That bandmate Gary Barlow. It is, interestingly, the only other song of the 2010s to make Robbie's Top 20. Its sales this week stand at 707,707 copies, which is pretty cool if you're a bit of a numbers geek (which we are, obviously – it's what we do). Let's remember the week when Candy hit Number 1 back in 2012.

Way back in 2000, Robbie caused huge controversy with his third bestseller Rock DJ. It wasn't his rapping that caused the issue – although he would try it out again to a mixed reaction with Rudebox in 2006, his 26th bestseller – it was the video. Robbie ripped off his flesh and fed it to some cannibalistic rollerskating models (as you do) and TV channels had a bit of a meltdown and wouldn't show the whole thing before 9pm. Its sales tally stands at 680,000. Revisit the Official Chart the week that Rock DJ entered at Number 1.

Robbie's fourth biggest seller is a cover and gave Robbie his second Number 1, with over 503,000 copies sold. Can you remember which pop big hitter Rob kept off the top spot with She's The One back on this week in 1999?

Robbie's very first chart-topper, the lead single from his second album I've Been Expecting You, sampled a James Bond theme (Nancy Sinatra's You Only Live Twice) and was a BIG event. Only fitting then, that it should be fifth on his countdown, with 497,000 sales.

Robbie's top-selling duet is with Hollywood megastar Nicole Kidman, who teamed up with Rob on a cover of Frank and Nancy Sinatra's Somethin' Stupid. Another Nancy connection? Rob must be a big fan. It scored the Official Christmas Number 1 for 2001 and has sold almost 385,000 copies.

Kids, 2000's ballsy team-up with Kylie Minogue, complete with raunchy video, comes in 14th with 240,000 sales, Kids charted at Number 2 upon its release in October 2000, kept off the top spot by U2's Beautiful Day. While Robbie's reunion with old rival Gary Barlow, Shame, is right behind in 15th, with 229,000 copies shifted.

Radio is Robbie's lowest selling Number 1, released when singles sales were in a dip as a result of illegal downloading in 2004, and scores just over 100,000 sales, coming in 23rd. Robbie's top seller not to chart at all is Mr Bojangles, from his first swing album Swing When You're Winning in 2001, making his Top 30.

MORE: See all Robbie Williams' UK hit singles and albums and where they charted.