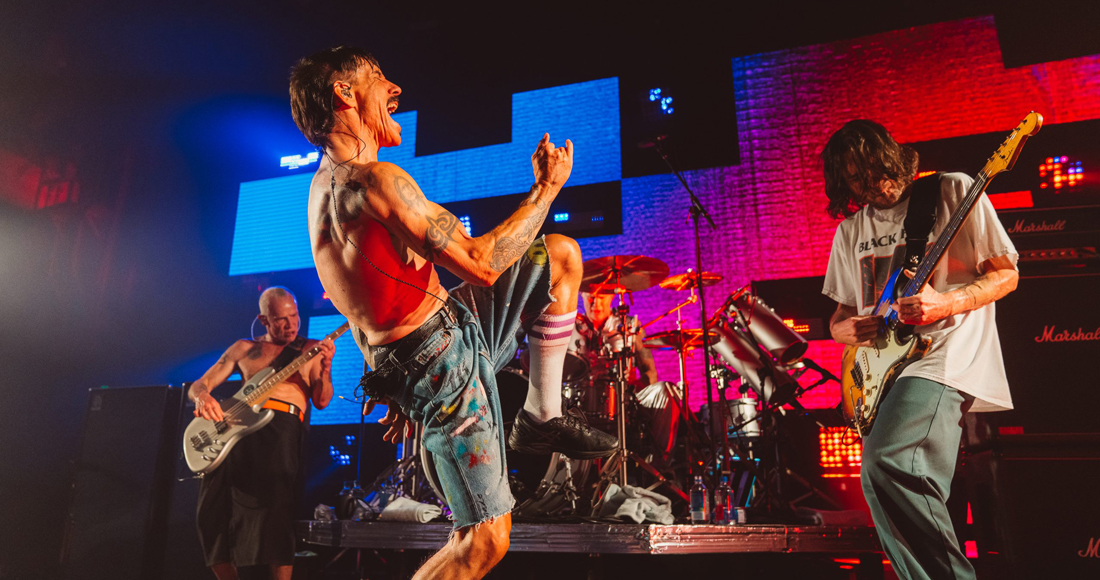 The Red Hot Chili Peppers have just earned their fifth UK Number 1 album with Unlimited Love - the group’s first Official Number 1 album in over a decade, their last being 2011’s I’m With You.

The record sees the group reunite with guitarist John Frusciante, who previously left the band in 2009, last appearing on the group’s 2006 Number 1 album Stadium Arcadium.

In a career spanning nearly 40 years, the Chili Peppers have so far achieved a total of 21 UK Top 40 hits, including four Top 10s.

To celebrate the success of Unlimited Love, we're counting down Red Hot Chili Peppers' most-streamed songs ever in the UK.

A testament to how the Peppers' have survived and thrived over the past 39 years, songs from their very recent albums have cracked their all-time streaming top 20. These include more recent fan-favourites like 2016's The Getaway (19) and 2015's Suck My Kiss (17), which sit alongside older classics such as 1990's Higher Ground (15) and 1994's Give It Away (11).

Of course, the hits are also present on this list; including The Zephyr Song (10) and of their two highest-peaking hits in the UK, By The Way (8) and Dani California (6) which both reached Number 2 on the Official Singles Chart.

Fun fact: not one of the songs in the Top 5 originally reached the UK Top 10 in its original release. Now, let's break down that Top 5, before revealing the top 20 in full:

The first single from 1999's Californication, the band's seventh studio album, Scar Tissue was an introduction to the more...mellow vibes of its parent album.

Peppers frontman Anthony Kiedis has said that Snow (Hey Oh) was written about "surviving, starting fresh. I've made a mess of everything, but I have a blank slate—a canvas of snow—and I get to start over."

An early-career hit for the band, Under The Bridge's Number 13 peak for Under The Bridge was at the time, an all-time high peak. Now, Under The Bridge is the third-most streamed track by the Red Hot Chilli Peppers, wracking up 104 million streams overall, including 5 million video streams.

One of the band's best known hits, Californication was produced by the legendary Rick Rubin (Lana Del Rey, Johnny Cash) and apparently the production of the song was the hardest part to nail down - given that Kiedis believed the song contained some of the band's best-ever lyrics.

Californication may not be the most-streamed song in the Peppers' back catalogue, but it's actually their most-streamed video - with 11 million video streams to date.

No real surprise here, perhaps the biggest surprise is realising that the Peppers' most-streamed song in the UK (and one of their most recogniseable hits) didn't even manage a placement inside the Top 20?