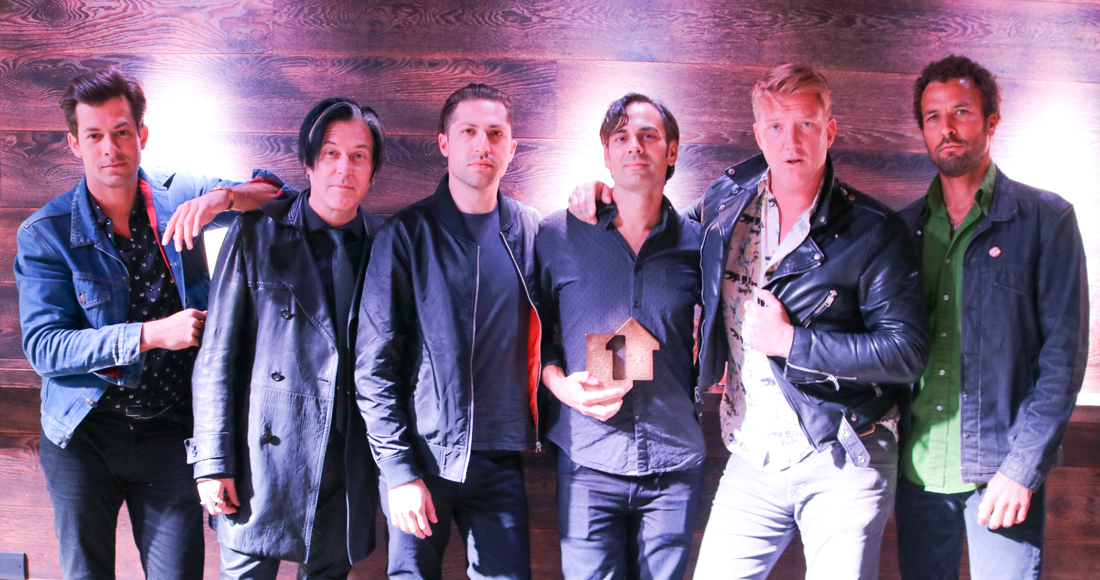 Congratulations to Queens of the Stone Age, who land straight in at Number 1 on this week’s Official Albums Chart with their new album Villains.

The band’s seventh studio album, which is produced by Mark Ronson (also pictured above), is their first to top the charts in the UK. The collection shifted 32,000 across physical, download and streaming equivalent sales, outselling their closest rival, Ed Sheeran’s ÷ by more than double.

Four of the band’s previous six records have landed inside the Top 10, with 2013’s Like Clockwork peaking at Number 2. Check out their full Official UK Chart history here.

Fellow American rockers War On Drugs make a strong showing with their fourth collection A Deeper Understanding, which is new at Number 3 and becomes their first Top 10 in the UK. Meanwhile, Massachusetts trio PVRIS also celebrate a personal best with their second album All We Know Of Heaven, All We Need Of Hell, which debuts at Number 4.

Florida-born rapper XXXTentacion enters at Number 12 with his debut record 17, hip-hop star Lil Uzi Vert is at 14 with his new album Luv Is Rage 2, and US southern rockers The Cadillac Three open at Number 16 with their third album Legacy.

Further down, a number of albums make huge gains this week. Eminem’s greatest hits Curtain Call returns to the Top 20 for the first time in 11 years at 18 following his headline slots at Reading and Leeds festivals, and Haim’s Something To Remember is up 20 places to 26.

Taylor Swift’s 1989 album – released in 2014 – returns to the Top 40 at 32 (up 34 places) following the release of her new single Look What You Made Me Do and in anticipation of her new record reputation, out in November. The Trolls movie soundtrack leaps 28 to Number 33, The Killers’ Direct Hits rebounds 27 spots to 32, and Kasabian’s latest record For Crying Out Loud vaults 50 places to 36.