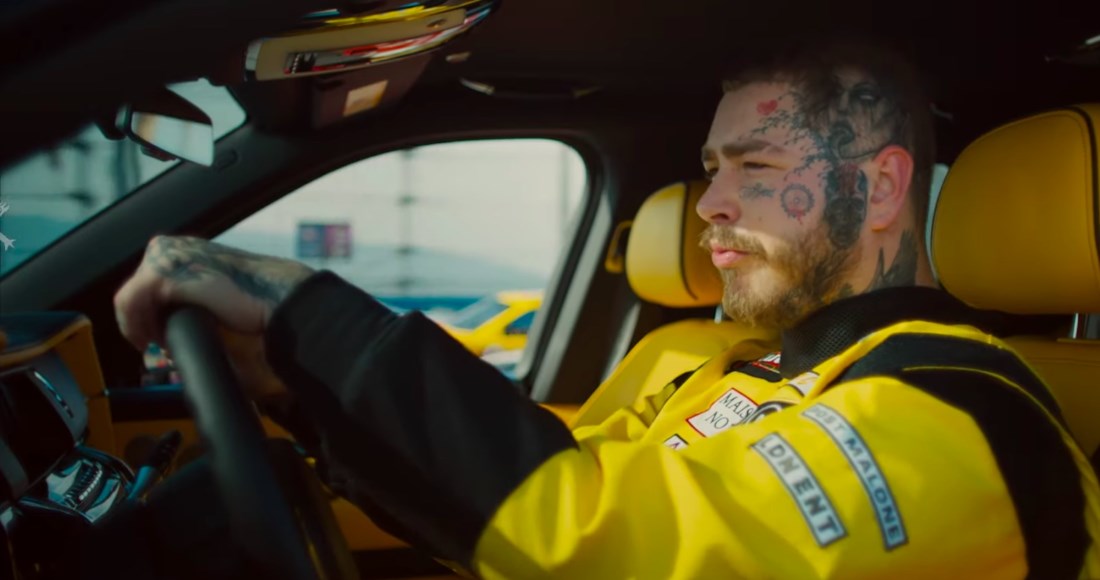 Post Malone has become one of the most bankable and reliable hitmakers over the past few years, and his return is no exception.

Motley Crew, the first single from the rapper's fourth studio album, due out this year, is somewhat of a return to Posty's more rap-driven origins, rather than the pop-orientated sound he pushed on his last album, 2019's Hollywood's Bleeding - his second UK Number 1 album.

Below we've zoned in on the New York star's Top 5 most-streamed tracks, but the full Top 20 at the bottom of the article includes fan favourite hits such as 2016 breakthrough Congratulations and collabs with artists as varied as Kanye West, Ozzy Osbourne and Justin Bieber.

The second single released from 2019's Hollywood's Bleeding, Wow stripped away a lot of the excess that had been featured in a lot of past singles. It's a bouncy, carefree acoustic beat that carries Post's flow for most of the song, as he waxes lyrical about his dramatic and full-throttle rise to fame.

The sixth and final single from Post Malone's 2016 debut album Stoney, I Fall Apart became the highest-charting single from that record and the most popular track from the LP as a whole. Interestingly enough, though, it was only released as a single in 2017, following the success of Rockstar (more on that later), which functioned as the lead single for second record Beerbongs & Bentleys.

A propulsive, synth-pop-inspired hit from Beerbongs and Bentleys, Better Now was the biggest indication at the time that Post's eyes were turning more towards the pop charts. Better Now's maudlin lyrics and high-energy production prove that the New York native was more than capable of playing in the sandbox of both rap and pop and come out unscathed. To date, Better Now has been streamed 184.6 million times by the British public.

By far his biggest, most colourful offering to date, Sunflower was the lead track from the soundtrack to Spiderman: Into The Spider-Verse and was also included on Posty's third album Hollywood's Bleeding. Sunflower was a photosynthesised hit, peaking at Number 3 on the Official Singles Chart while tallying 1.93 million combined chart sales in the process.

Then in November 2020 following the release of Spider-Man: Miles Morales on Playstation 5, Sunflower returned to the Top 40 over two years on from its release after it sound-tracked gameplay on TikTok, despite the song not actually being in the game itself.

Racking up 270 million streams in the UK to date (including a mammoth 63 million video views) Sunflower is Post Malone's most-played song in the UK, but with downloads included, one song pips it to the 'post' (sorry) in his all-time rundown...

Take the title as something of a prophecy, Rockstar was, for most of the general public, their first introduction to Post Malone, and what an introduction. Moody, low-slung and instantly addictive, Rockstar is basically all chorus, with the only mix-up being the introduction of Atlanta rapper 21 Savage's guest verse.

Both artists' first Number 1 hit on the Official Singles Chart, Rockstar is by far Post Malone's most successful track on UK soil. It stayed at the top spot for four weeks, and has amassed 158,000 downloads and a lofty 242 million streams to date.

It's also the perfect encapsulation of why Post Malone's frequent collaborator Louis Bell has gone on to become a hitmaker for acts like Taylor Swift, Miley Cyrus and Halsey.