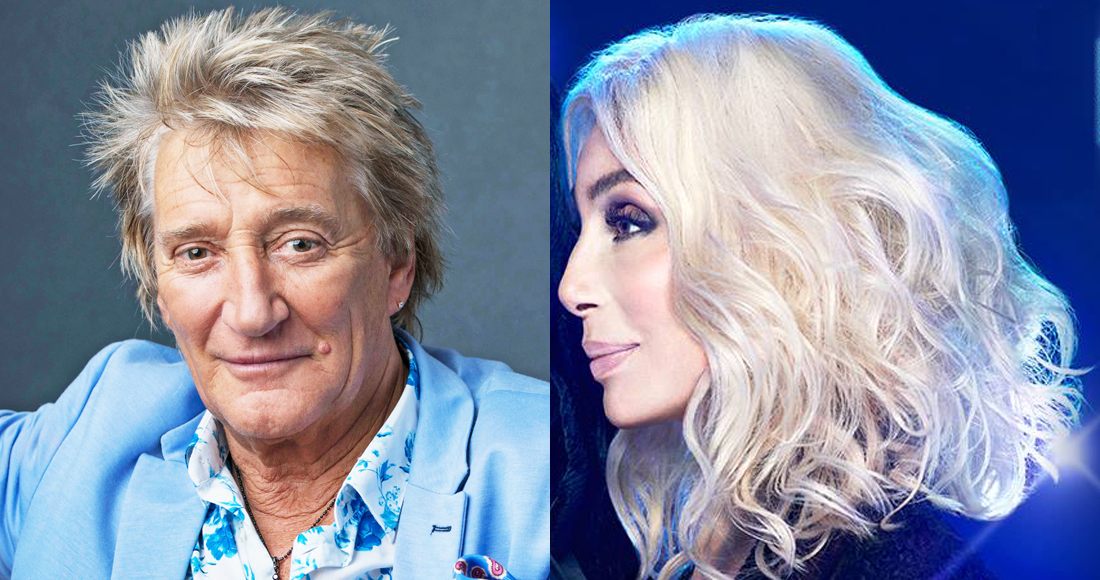 There's room for legends only at the top of the Official Albums Chart Update, as pop veterans Rod Stewart and Cher square up to claim this week's Number 1.

Rod, who first topped the album chart back in October 1971, leads with Blood Red Roses, his 30th studio album. Currently over 11,000 combined sales in front, should Rod top the chart this Friday, it will be his ninth Number 1 – he was the last at the summit in 2013. See Rod Stewart's full UK chart history

In second place, Cher is strutting her stuff with Dancing Queen, her covers album of ABBA classics. If Cher stays Top 3, it'll be her highest peak since she spent seven weeks at Number 1 with her Greatest Hits in 1992.

Aside from Rod and Cher at the top, there are 15 further albums in with a chance of a Top 40 placing this Friday.

Lil Wayne is on track for his highest UK chart peak with Tha Carter V, starting at 5, and Nile Rodgers & Chic could be back in the Top 10 for the first time since 1979 – It's About Time is in at 6,

Following the death of Chas Hodges in September, rockney duo Chas & Dave are on track to return to the Top 10 for the first time in over 23 years with career retrospective Gold at 8, while Irish rockers Kodaline are gunning for a third Top 10, with Politics of Living, new at 10.

DJ and producer Sigala is at 13 with debut album Brighter Days; Joe Strummer 001, a collection of the late Clash lead vocalist's rare and unreleased material, starts at 18; American blues singer Seasick Steve's Can U Cook? is at 19; and American rapper and songwriter Logic start at 20 with YSIV.

Soft Cell's singles collection Keychains and Snowstorms start at 24, Tom Petty retrospective An American Treasure is at 27, Irish duo Foster & Allen's Putting on the Style is new at 29, and American punk band Beartooth eye a second Top 40 album with Disease, new at 30.

Nick Cave & the Bad Seeds' Distant Sky: Live in Copenhagen goes in at 32; rap group Cypress Hill are at 34 with Elephants on Acid, their first studio album in eight years; while Polish band Riverside round off this week's potential new entries, with Wasteland starting at 35.