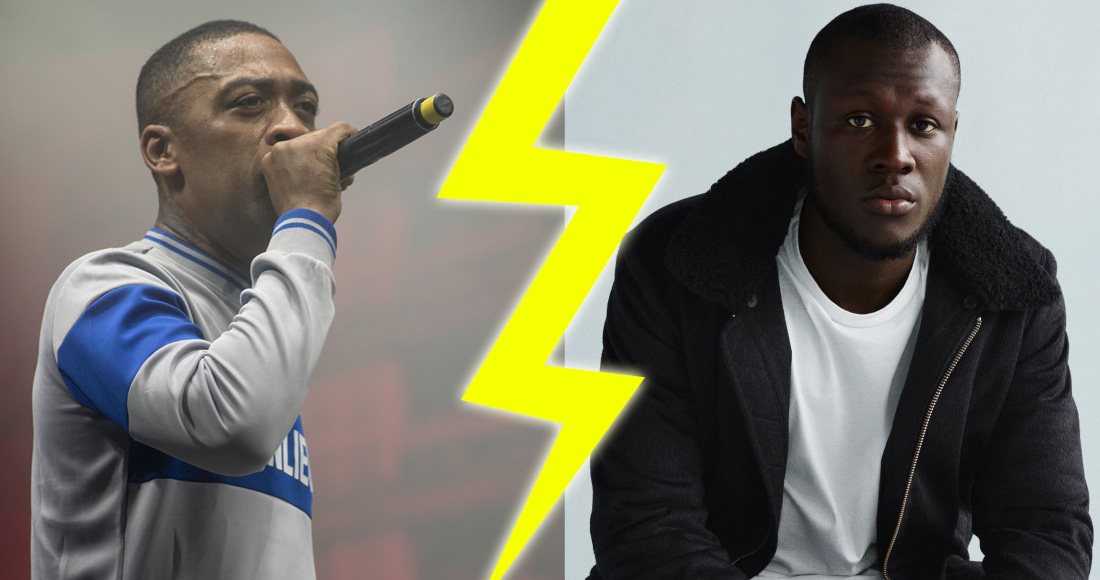 What is it with popstars and having a ruck? There's more beef in the music industry than every branch of McDonald's but most of the time – we hope – they're not too serious.

The ongoing war of words between Stormzy and Wiley looks like it won't be dying down any time soon and it got us thinking: what if we could end some of the most notorious or historic pop feuds right here, right now, using chart feats and stats?

We rounded up a selection of popstar spats and present the cold, hard chart facts speak for themselves. We'll leave it you to decide who emerges victorious. Let's start with the big one:

Grime's biggest giants have, to put it mildly, not been getting on of late exchanging barbs on Twitter and diss tracks. Who's right and who's wrong, we couldn't possibly say, but if we take it to the stats, who comes out on top? Wiley was first to hit the Top 40, back in 2004, while Stormzy came along in 2015. On chart-toppers, Wiley has one, Heatwave (with Ms D), from 2012, while Stormzy has notched up three in the last eight months: Vossi Bop, Take Me Back to London (with Ed Sheeran), and Own It (with Ed Sheeran and Burna Boy). Wiley has 12 Top 40s, of which seven went Top 10. Stormzy has already clocked up 20 Top 40 hits, with nine of them making the Top 10. Wiley's biggest song is Heatwave which has 812,000 combined sales. Stormzy's biggest tune is his first Number 1 Vossi Bop which has racked up 1.17m chart sales. 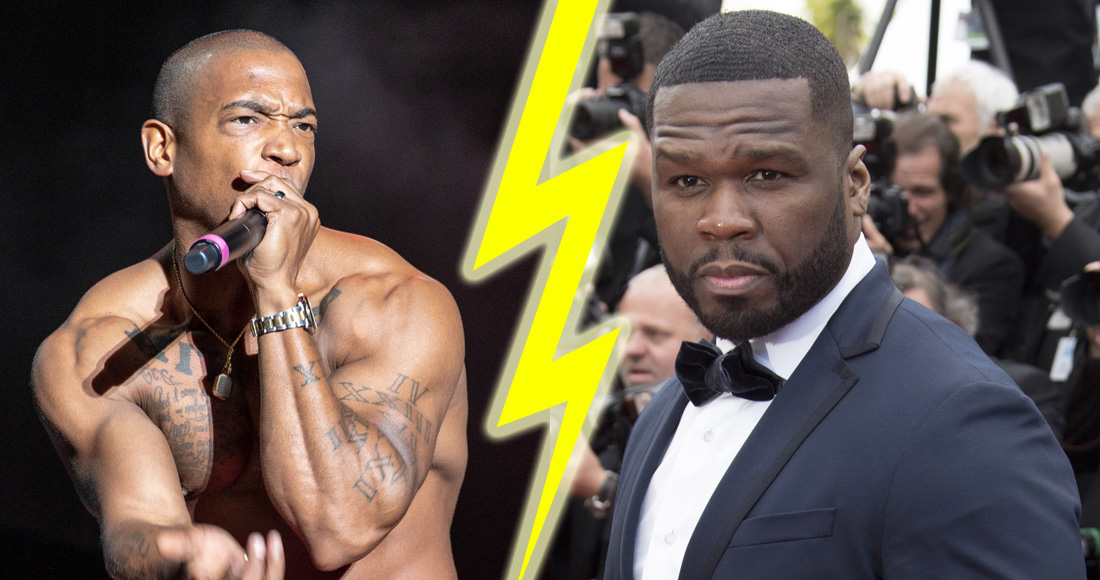 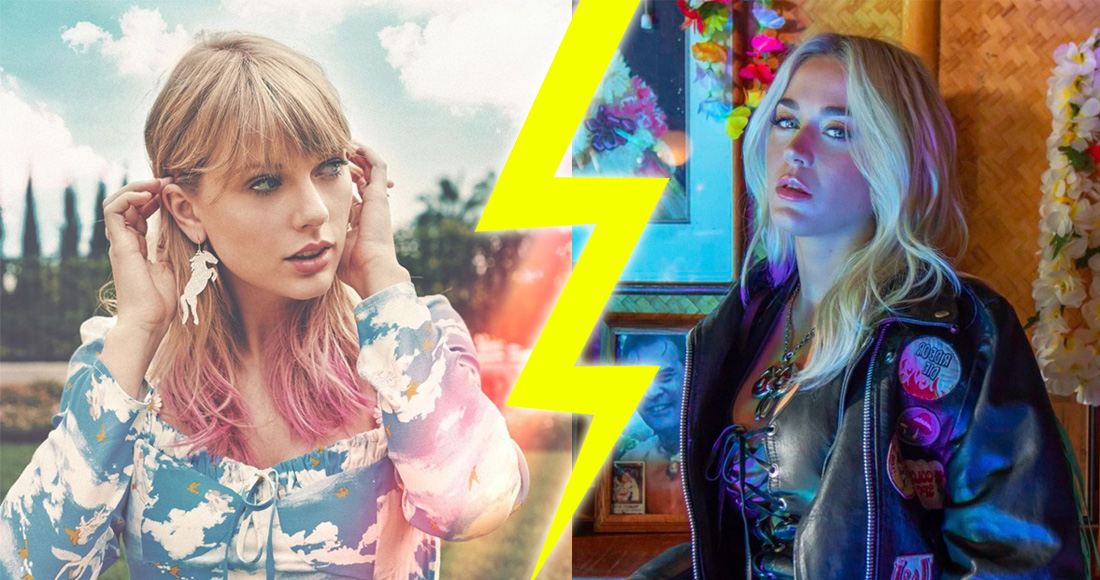 Kicking off over he Perry/Swift pop ruckus rumbled on for years, with both women releasing some thinly veiled diss tracks. Thankfully this one had an happy ending, as the pair made up, revealing the reconciliation in Taylor's You Need to Calm Down video, when Katy made a special cameo. But if we pretend that never happened, who would win in the chart stakes?

Katy was first to score a hit, in 2008, going in at Number 1 with I Kissed A Girl, and Taylor followed in 2009 with Love Story, peaking at 9. Katy has topped the Official Singles Chart an impressive five times – I Kissed A Girl (2008), California Gurls (2010), Part of Me (2012), Roar (2013), and Feels, alongside Taylor's ex Calvin Harris, Pharrell, and Big Sean. Taylor has had just one Number 1 single: 2017's Look What You Made Me Do. On the albums chart, Taylor has four chart-toppers to Katy's two. Katy's biggest song? Roar, which is one of two million-sellers in her back catalogue, has a combined sales tally of 1.83m. Taylor's is Shake It Off, which has 1.7m chart sales. 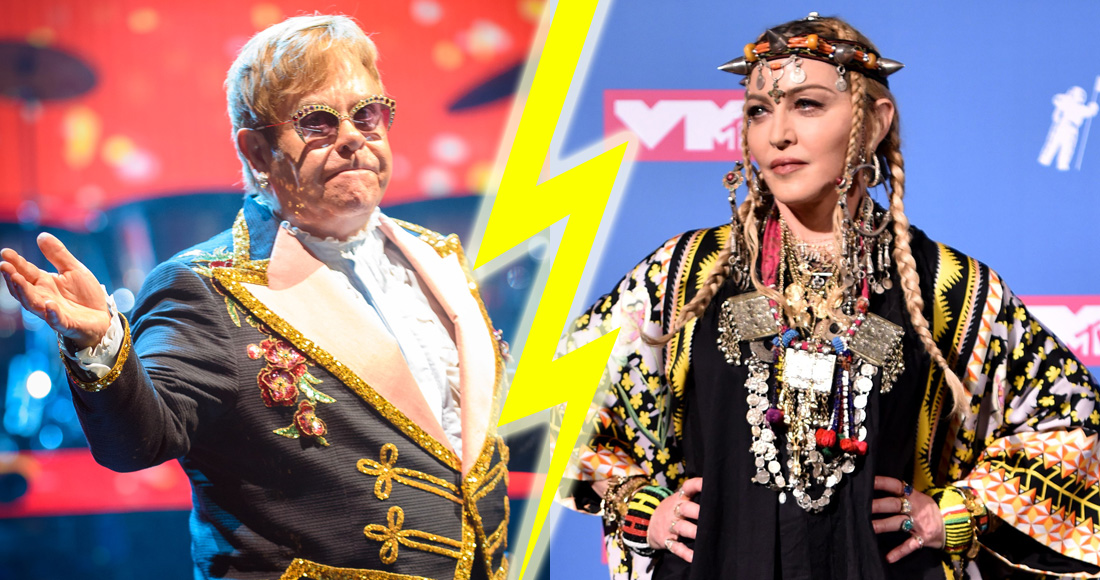 Two of pop music's biggest legends, Madonna and Elton John have a troubled relationship. For the best part of a decade, the two were locked in a feud after Sir Elton kicked things off in 2002 by claiming her Bond theme Die Another Day was "the worst ever". Madonna never directly threw back any barbs, but Elton wasn't put off, criticising her tours, movies, and wardrobe choices – likening Madge to a "fairground stripper" at one point – until, in 2012, he apologised and bought her dinner. Madge and Elt are both chart legends, and record holders: Madonna has the most Number 1 singles (13) and albums (12) of any female artist, and the longest run of consecutive Top 10s of any artist of all time (36), while Elton John has seven Number 1 albums and singles, plus the biggest selling single of all time in the shape of Candle in the Wind '97 – 4.94 million sold. 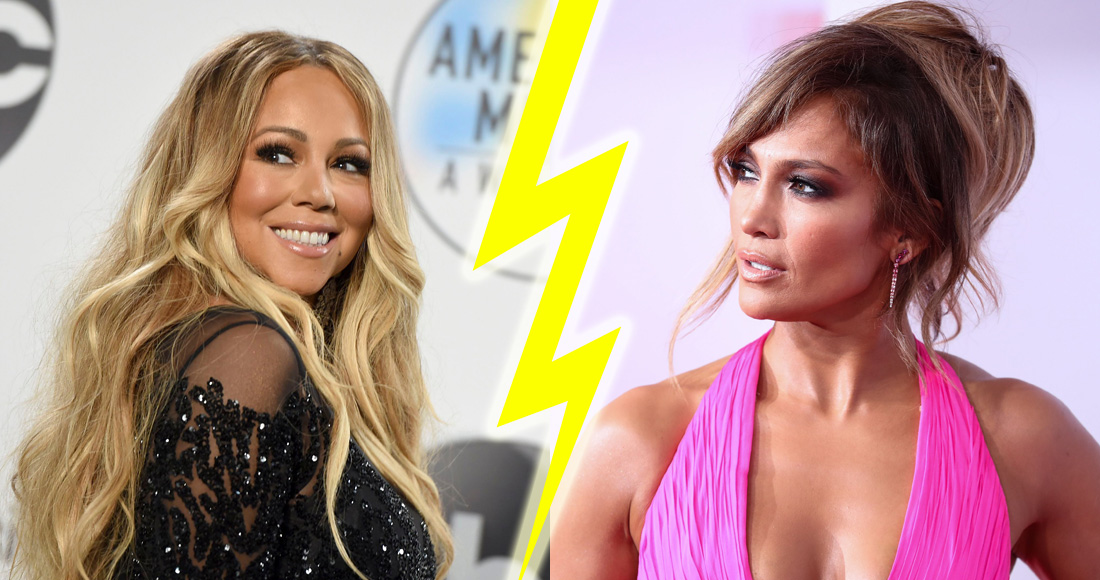 Of course, for Mariah, this feud isn't actually happening because she doesn't actually know J-Lo. The frost between our two talents began thanks to the media's obsession with asking female popstars what they think of other pop divas in the hopes of creating a rivalry: Mariah, no doubt sick of this tired old line of questioning, deciding to take things in a new direction. She very diplomatically deflected questions and avoided bitching by claiming, "I don't know her". Fair enough. One huge meme later, and even J-Lo herself had to concede it was puzzling, claiming the pair had met many times: "She's just forgetful I guess," said… oh what was her name? J-Lo, that's it! Mariahitis is catching. 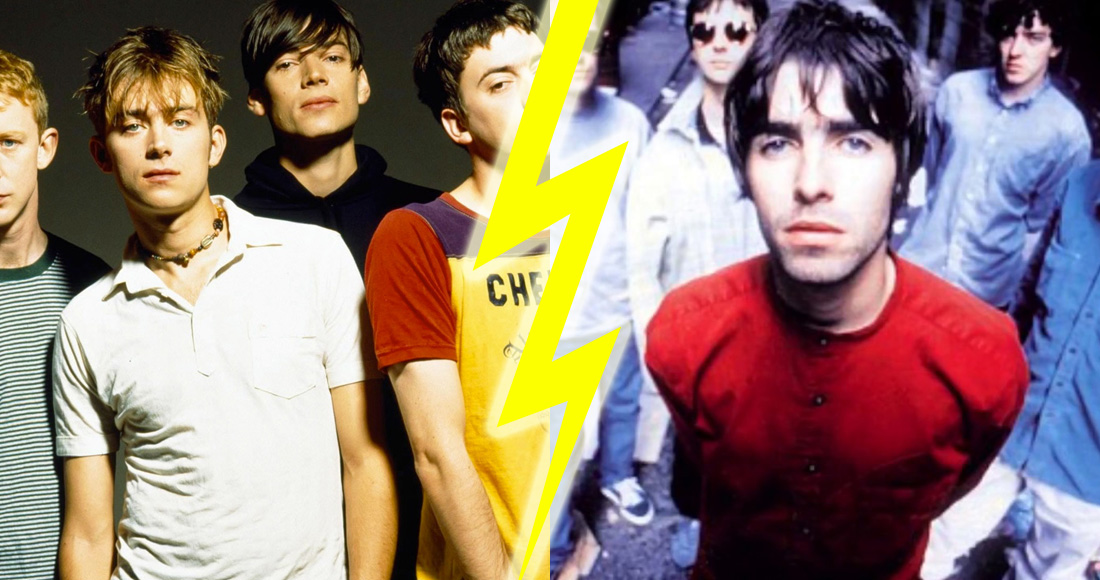 Things may have softened now – between Noel Gallagher and Damon Albarn, at least – but in the '90s these two groups of Britpop bruisers were at war. They traded insults at any given opportunity and even released singles on the same day in one of the most infamous chart battles of all time – Blur's Country House beating Oasis' Roll With It to Number 1. But if we're talking chart stats, how do things end up?

Blur have two albums with sales of over a million: 2000's The Best Of (1.24m) and Parklife (1.1m), six Number 1 albums, and two chart-topping singles. Their biggest song is 1997's Song 2, with 723,000 sales. Five of Oasis's albums have passed a million, with the biggest (What's The Story) Morning Glory racking up sales of 4.3 million, making it one of the biggest selling albums of all time. Oasis have 8 chart-topping singles and albums, and two million-selling singles, with Wonderwall coming out on top, 1.52 million combined sales.

As if battling other bands wasn't bad enough, Oasis's two major members spent most of their career at war with each other, to such an extent that the band actually broke up! Their feud hasn't lightened up much since, either – absence has not made their hearts grow fonder. Post-Oasis, Liam scored two Top 3 albums with Beady Eye, before launching his own solo career, and landing two Number 1 albums. Liam has managed three solo Top 40s and one with Beady Eye. Brother Noel's post-breakup project, Noel Gallagher's High Flying Birds have three Number 1 albums and four Top 40s. Our kid has a bit of catching up to do. 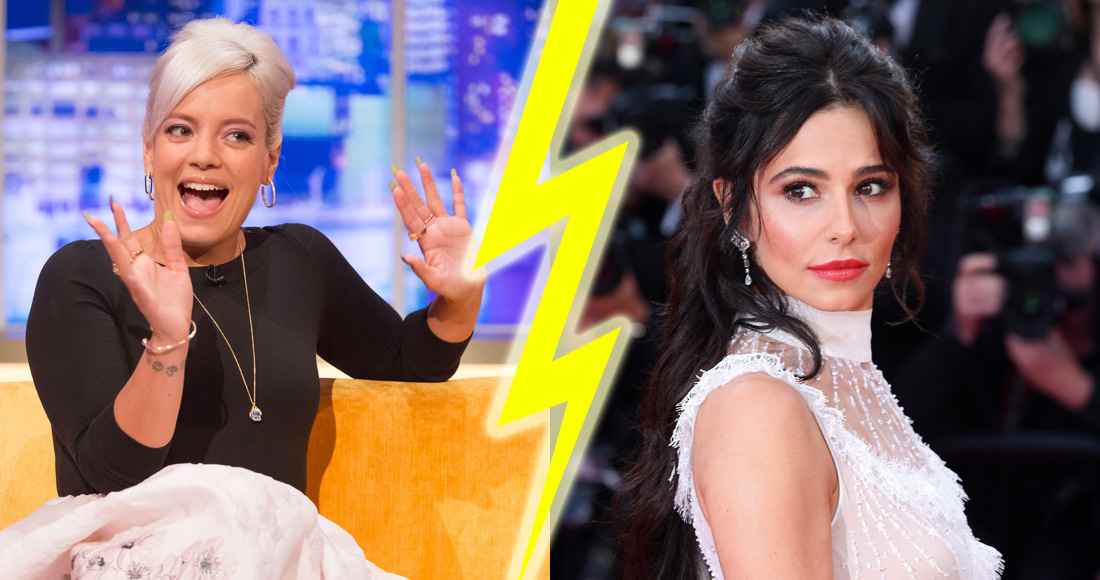 You don't get much more Noughties than Lily Allen and Cheryl trading insults in the media. Some very harsh words were said – kicked off by Lily saying her song called Cheryl Tweedy was not meant to be complimentary – but the row eventually fizzled out and Lily has since said she regrets the battle, as she actually quite likes Cheryl!

Setting aside her hits with Girls Aloud (to make it a fair fight), Cheryl has five Number 1 singles in the UK (a record at the time), of 8 Top 10s from ten Top 40s. Her biggest song is her debut, Fight For This Love, with 1.04m sales. Two of Cheryl's albums have topped the charts, with her most successful being her debut 3 Words – 1 million sold. Lily Allen has scored three Number 1s on the Official Singles Chart, and her biggest is 2013's Somewhere Only We Know, with 869,000 combined sales. Two of Lily's albums have gone to Number 1, and two have sold over a million, with the big one being her debut Alright Still, with 1.15 million sales.

The thing to remember about chart stats and feats, of course, is that it's not about beating your rivals, it's about… actually, no, hang on, that's exactly what it's about. You can't get to Number 1 without literally beating everyone else to the top.

Anyway, one thing we can agree on is that popstar feuds are good for little except column inches in newspapers – surely everybody should just get along.