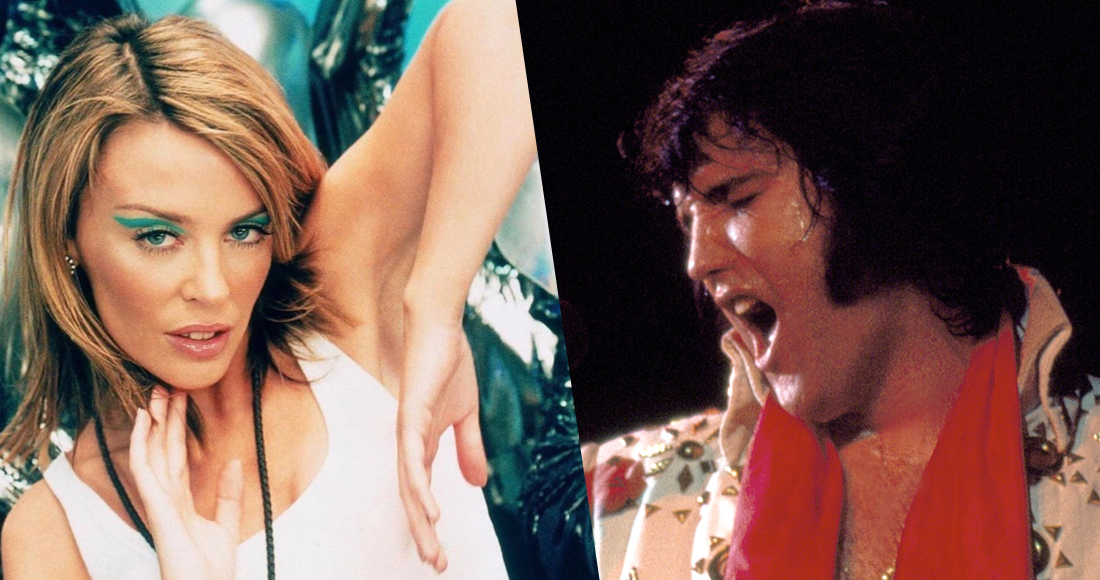 In a battle of icon vs. icon, the Official Singles Chart this week in 2002 saw an unlikely tussle between Kylie Minogue and Elvis Presley for the Number 1 spot.

In the red corner was Kylie with Love At First Sight. The star was enjoying a hugely successful run of success with her Fever album: lead single Can't Get You Out Of My Head was a global Number 1, while follow-up In Your Eyes was a Top 5 UK hit. Third single Love At First Sight - a slice of sparklingly stylish nu-disco pop - was everywhere, a hit on radio and TV music channels. A seventh Number 1 was within reach.

In the blue corner was Elvis, who was experiencing a revival (of sorts) in the summer of 2002. To mark 25 years since his death, Elvis's estate went into promotional overdrive, releasing a new retrospective Elv1s: 30 No.1 Hits and releasing a remix of A Little Less Conversation, a well-known song that had only been a minor hit in the US upon its original 1968 release.

The new version by Junkie XL (aka Tom Holkenborg) marked the first time an artist outside the Presley organisation had been allowed to remix an Elvis song. Boosting the track's popularity even further was its use in Nike's inescapable 2002 FIFA World Cup advertising campaign.

In the end it wasn't exactly a photo finish for the top spot: A Little Less Conversation debuted at Number 1 selling a staggering 243,000 copies, while Kylie's Love A First Sight took second place on 82,000 copies. It gave Elvis his 17th UK Number 1 single, logging four weeks at the top, while for Kylie, it ranks as one of her 11 Number 2s. A Little Less Conversation went on to be 2002's fifth best-selling single, with 634,000 copies sold that year.

Elsewhere in the Official Singles Chart that week, two more new entries landed in the Top 5: Sophie Ellis-Bextor's third release Get Over You/Move This Mountain was her third consecutive Top 3 hit at 3, and Nickelback's Chad Kroeger landed his first UK solo hit at 4 with Hero, recorded for the Spider-Man film soundtrack.

Listen to the Official Chart Flashback playlist on Spotify below.