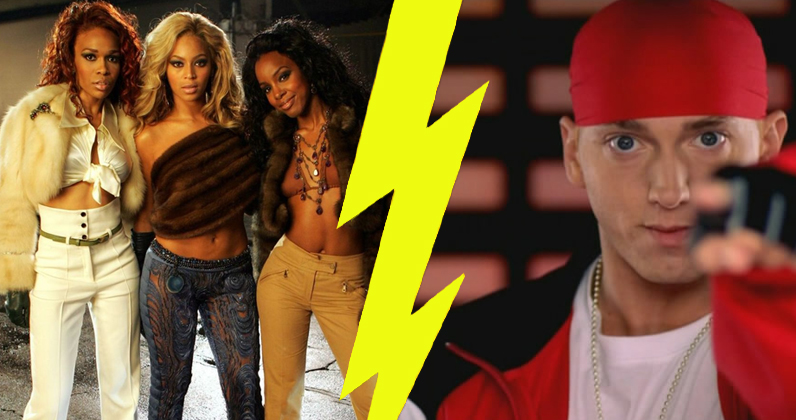 When band members go it alone, most groups wait for those solo hits to dry up before reforming, but not Destiny's Child.

The talented trio had a promise to keep, and they returned after three years away - with considerable solo success for at least two-thirds of them - with a proper breathtaking banger.

The video for Lose My Breath showed off the threesome's effortlessly precise moves, with the added thrill of watching the girls go up against… themselves, in a lung-collapsing dance-off.

Lose My Breath had Number 1 written all over it – a classic, hardcore Darkchild production with the usual tight vocal acrobatics from Kelly, Michelle and Beyoncé. However, Destiny's Child weren't the only comeback kids in contention, and Eminem had other ideas; the controversial rapper released the lead single from fifth album Encore, Just Lose It, the same week.

It was another strong video from rap's most famous blond bombshell (at the time, anyway), with his characteristic skits and japery.

MORE: See where all of Eminem's singles and albums charted in the UK

As a chart battle ensued, it was a very close race, and in the end, it was Eminem who nabbed the top spot, edging Destiny's Child into second place by just over 1,000 copies.

The rest of the Top 10 was packed with new entries. Britney Spears launched the campaign for her greatest hits collection with a cover of Bobby Brown's ballsy My Prerogative (3); Christina Aguilera teamed up with Missy Elliott for another cover – this time Rose Royce's Car Wash – at 4, from movie Shark Tale; and Usher paired up with Alicia Keys for My Boo at 5.

Jamelia had a new entry with a cover too – she redid Sam Brown's Stop, backed it with DJ, and went in at 9.

Further down the chart, veterans Wet Wet Wet, Elton, and George Michael all scored new hits, while we also see the first appearance of Kaiser Chiefs' I Predict A Riot (22) and future The Voice 2012 runner-up Tyler James (25).