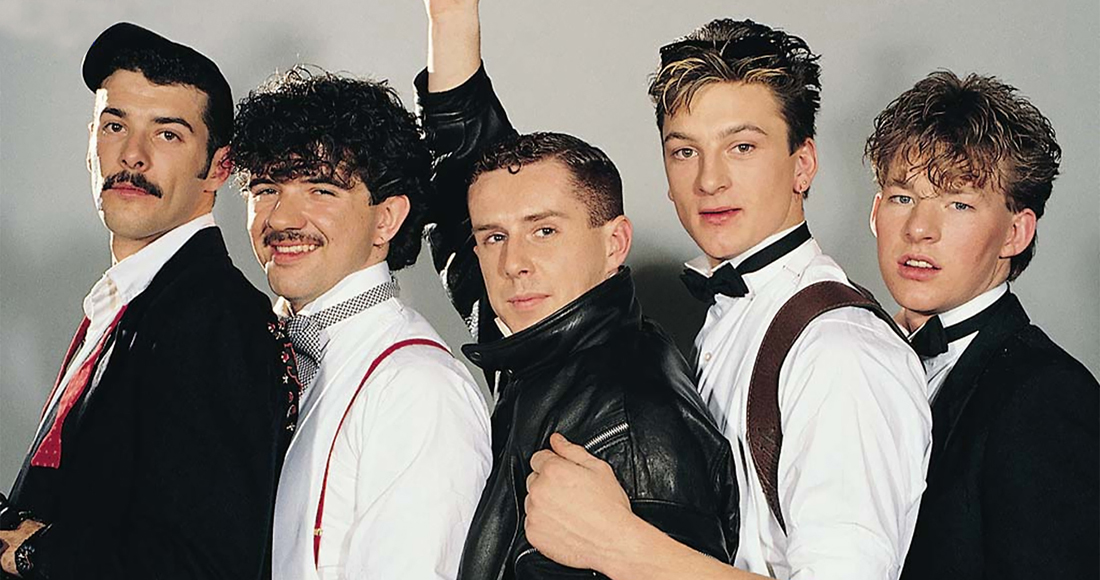 It’s 30 years since one of the most controversial Number 1s ever ruled the charts, selling TWO million copies – and spawning almost as many T-shirts.

The Official Singles Chart is never short of controversies. Whether it’s a saucy video or a rude word that needs bleeping, there have been quite a few songs that have caused a scandal over the years. But one of the biggest, and most successful, controversies was caused by the debut hit of a young Liverpool band called Frankie Goes To Hollywood.

Relax was released in late 1983 and despite a high profile, provocative advertising campaign, climbed slowly up the Official Singles Chart. It wasn’t until the band performed the track on classic music show Top Of The Pops on BBC1 that the song really took off, thanks to charismatic frontman Holly Johnson.

The song took controversy head on – its single sleeve had overtly sexual imagery, which was pretty unusual back in the early ‘80s – and its lyrics could be interpreted as being on the steamy side. Eventually Radio 1 DJ Mike Read said live on air that he wouldn’t play the song, setting a snowball effect in motion which saw the track banned from being played on Radio 1 during the day and on Top Of The Pops altogether.

The storm over Relax helped carry it further up the Official Singles Chart, eventually landing on the throne every popstar wants to sit on. This week in 1984, it spent its second week at the top.

Watch the video for Relax before we continue Frankie's story.

The ban was eventually, erm ‘relaxed’ (Very droll – Puns Ed), but the song’s success was already assured. Relax spent five weeks at Number 1 and has sold a whopping 2,000,000 copies to make it the 6th best selling single in the UK ever. Ever.

Relax also has impressive staying power – thought it started to slip down the Top 40 after its tenure at Number 1 was over, it surged back up the Official Singles Chart upon the release of Frankie’s follow-up single Two Tribes. Relax eventually landed back at Number 2 behind Two Tribes, so Frankie controlled the Top 2. Two Tribes gave the band another massive seller – it’s shifted 1.6 million copies.

Frankie Goes To Hollywood caught the public’s imagination so much that they weren’t just running to the record shop to buy their records – they wanted to wear them too. T-shirts and vests emblazoned with “FRANKIE SAY RELAX” became massively popular that summer.

Frankie Goes To Hollywood amassed 13 Top 40 hits (six of which were reissues of their early singles), including those three Number 1s. They were the first act to top the Official Singles Chart with their first three singles since Gerry & The Pacemakers in 1963.

And now, the rest of our retro Top 5. (It’s a really, really good one. REALLY GOOD.)

Another act enjoying their first taste of success this week in 1984 was orange-haired kooky New Yorker Cyndi Lauper. Female empowerment anthem/love letter to partying Girls Just Want To Have Fun was the first of 11 Top 40 hits for Cyndi, and was her biggest. It would even be a Top 5 hit for her again in 1994, as the more laidback Hey Now (Girls Just Want To Have Fun).

Everybody loves a one-hit wonder, especially one with a TV tie-in. In 1984, one of the most popular shows on telly was Auf Wiedersehen Pet, the tale of a bunch of Geordie builders who packed themselves off to Germany in search of a better life to earn money for their families back in the UK. It was far from glamorous, we can tell you. That’s Livin’ Alright was the raucous theme tune to the show and the only hit for Joe Fagin. Auf Wiedersehen Pet featured, in a very early role, Jimmy Nail, who would later go on to have a Number 1 single in 1992 with Ain’t No Doubt.

What a song. Freddie Mercury was at his most spectacular and theatrical belting out the big numbers, and Radio Gaga was a pretty big one. It would eventually make it to Number 2, their fifth single to do so. Queen enjoyed a total of six Number 1s on the Official Singles Chart, but only three of those – Bohemian Rhapsody, Under Pressure (with David Bowie) and Innuendo – made it during frontman Freddie’s lifetime. Bohemian Rhapsody has the distinction of making it to Number 1 twice (in 1975 and 1991) and also being Official Christmas Number 1 twice.

Here’s another one-hit wonder for you. Despite its upbeat vibe, it's really about a break-up, and it eventually made it up to Number 4. While there’d be no more chart success for US singer-songwriter Matthew Wilder, he did score an Oscar nomination for his work on Mulan and has worked on music for Christina Aguilera, Kelly Clarkson and Miley Cyrus.

This performance of the song on Top Of The Pops is really quite something: