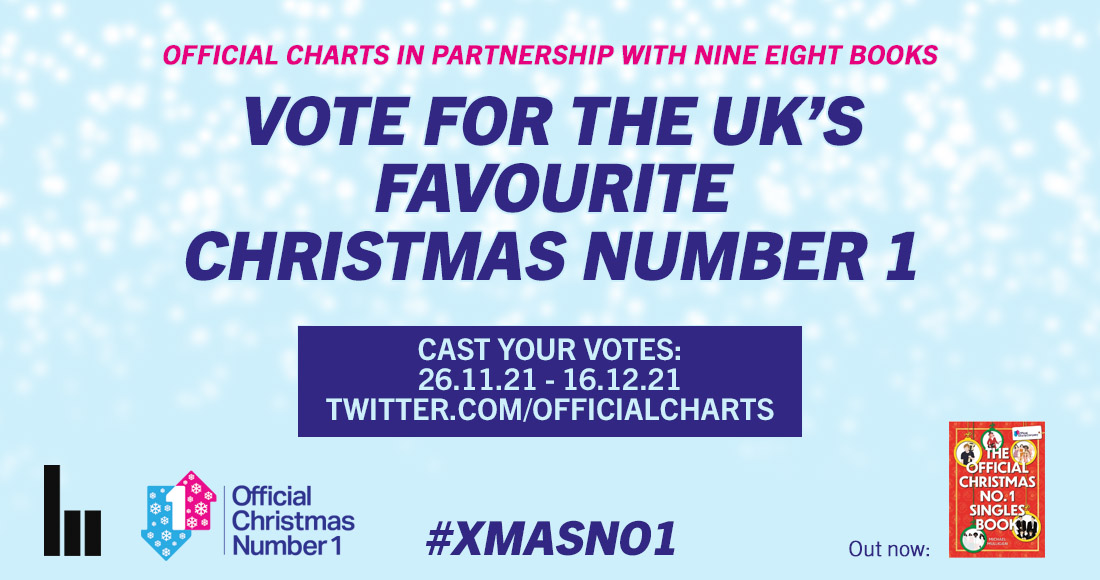 The Official Charts, in partnership with Nine Eight Books, is launching a campaign to find out the UK’s favourite Official Christmas Number 1 single of all time.

Between seasonal favourites like Band Aid (1984) and Shakin’ Stevens’ Merry Christmas Everyone (1985), iconic Christmas chart battle moments like Rage Against The Machine’s Killing In The Name Of (2009), and LadBaby’s sausage roll-themed charity single hat trick between 2018-2020 - the Christmas Number 1 race is the highest profile chart race of the year, and one of Britain’s most-anticipated and unpredictable festive traditions.

But which former winner will emerge as the public’s favourite of all time?

Head over to the Official Charts Twitter page (@OfficialCharts) every day at 12pm from 26 November to cast your vote for your all-time favourite Christmas Number 1, with the grand final taking place on Thursday 16 December, and the final result announced at the start of the 70th Official Christmas Number 1 race, on 17 December 2021.

Pete Selby, Publishing Director at Nine Eight Books Publishing said, “There are only ever two perennial festive questions we should trouble ourselves with. Firstly, ‘Is Father Christmas real?’. The answer to which is ‘Of course’.

And secondly, ‘Is ‘Don’t You Want Me?’ by Human League the Greatest Ever Christmas Number One Single?’ To which the answer is…..well, I guess we’ll find out. Get voting!”

Keep up with all the latest Official Christmas Number 1 news

Out now, The Official Christmas Number 1 book is the perfect gift for music lovers of all ages, jam-packed with facts, figures and photos to get your toes tapping along to the sounds of seven decades of festive chart-toppers.

With a fully illustrated double-page spread for every year since the Official Singles Chart began in 1952, Michael Mulligan's fun and authoritative journey through the Christmas archives will delight curious browsers and dedicated pop nerds alike.

Featuring Top 10 countdowns, fascinating trivia about the highest-charting Christmas singles and plenty of entertaining infographics, this is the ideal family stocking-filler, celebrating all that is wonderful, whimsical and unpredictable about the festive season's most hotly contested musical event.

The Official Christmas No.1 Singles Book is priced at RRP £12.99 and is available via the Official Charts online store, on Amazon, Waterstones, WHSmith and more.

Read more about The Official Christmas No. 1 Singles Book here.