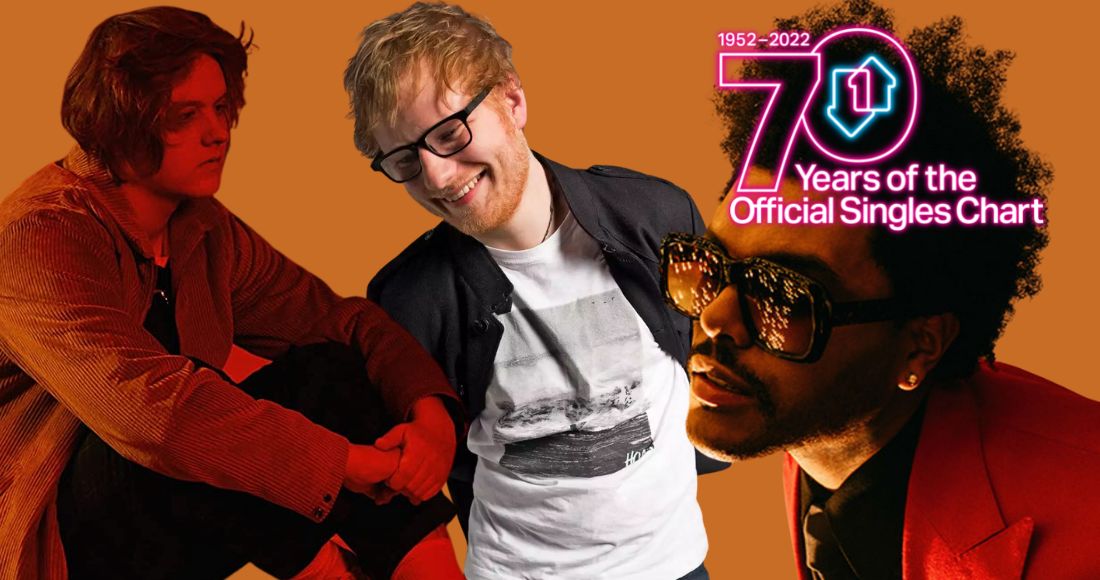 The way we consumed music changed drastically over the last decade. Thanks to the dominance of streaming, commercial music had its first great leveller of the digital age; something artists like Dua Lipa, Justin Bieber, The Weeknd and especially Ed Sheeran used to their advantage.

To commemorate just how large and wide-reaching these changes were, we're presenting you the Top 10 biggest songs from the 2010s, now taking into consideration both pure, physical sales as well as streaming figures too.

Disclaimer: This is a list of the best-selling singles released from 2010-2019, compiled from Official Charts Company data combining pure, physical sales and streaming figures from 2010 - 2022.

John Leged's schmaltzy ode to his wife Chrissy Teigen has quickly become the wedding dance du jour for a new generation; and its not hard to see why.

Despite never reaching Number 1 (having to settle for second place instead), All Of Me now ranks as the tenth biggest song from the 2010s, with a combined total of 3.65 million chart sales, across physical purchases and streaming.

The Weeknd seemed to be on the cusp of true superstardom for a fair few albums, before this disco stomper courtesy of Max Martin finally got him there.

Racing with kinetic energy, Blinding Lights was one of two tracks (the other being Dua Lipa's ascendant Don't Start Now) that kickstarted a full-on disco revival, that continues to this day.

This 2016 mega-hit by Drake had very humble beginnings; featured vocalist Kyla's voice is taken from a sample of her underground 2008 single Do You Mind (Crazy Cousinz Remix).

Ever the Anglophile, Drake slotted Kyla into his trop-pop smash, also eliciting the help of rising Afrobeats star Wizkid. The result was one of the first dominant releases of the streaming era; settling in at Number 1 for a staggering 15 weeks.

A shimmering summer anthem from George here, taken from his second album Staying At Tamra's.

Shotgun remains the singer-songwriter's first and so far only UK Number 1 single but don't worry about him too much - he's had one of the biggest hits of 2022 with his single Green Green Grass.

We are convinced that by the end of 2017, so many people had collectively heard Despacito so many times, a good chunk of the British people had a basic comprehension of Spanish.

Despacito was one of the first signs that Latin Music was becoming ever prevalent and popular in the modern landscape. Thanks to its success, we've seen the emergence of several exciting new artists from Bad Bunny and Rosalia to Anitta and Maluma.

Bringing the 70s back in style, Mark and Bruno's opulent ode to funk was a massive hit on both sides of the Atlantic. Originally a victim of stagged UK release schedules, its release was brought forward by a month following X Factor contestant Fleur East's impassioned performance of the song that most people, Simon Cowell included, had never really heard before.

But Uptown Funk was here, and it was here to stay. Not only giving Mark Ronson is his first UK Number 1 (!) but also setting Bruno off on an exciting new sound to discover, reaping further rewards with his 24K Magic solo record and his work as Silk Sonic with Anderson .Paak.

Ah, Edward Sheeran. As you might have guessed, we'll be seeing a lot of him in the latter part of this list. Shock, horror!

Ed has become the de facto face for the dominance of streaming on the charts, and his first entry here comes from the biggest hit from his second album X (Divide), a tender ballad co-written with Welsh singer-songwriter Amy Wadge.

A big showing for Scottish star Lewis Capaldi, who quickly ascended to cultural dominance in the UK when Someone You Loved caught fire a few months following its original release.

Given how exuberant Capaldi's personality is, it's still surprising that his biggest hit is such a sad song, full of longing and feeling, at times, drained of all hope. Instead of being a break-up ballad, however, Lewis has said he wrote the song as a tribute to his late grandmother.

Whether as a solo track or a duet with the Queen, Beyoncé herself, Perfect was the undeniable heart of Ed's blockbuster Divide record, and is the officially the second-biggest song from the 2010s.

With combined UK chart sales of 4.70 million, Perfect remains a, well, perfect ode to Ed's future Cherry Seaborn, whom he wrote the song about after re-connecting years after being in school together. Aw.

Initially hesitant to issue the uber-pop Shape of You as the lead single of Divide, Ed came to a compromise - packaging Shape of You along with the Benny Blanco-produced, stadium-rock track Castle On The Hill.

But it was Shape of You that, from the second of its release, had a grip on the British public. Not only did it stay at Number 1 for 14 weeks, Shape of You helped Ed turn into a once-in-a-generation music superstar, and there's never been any looking back.

Fittingly, then, Shape of You ends the list as the biggest song from the 2010s, with a mammoth combined total of 5.72 million chart sales, taken from physical sales and streams.

The Official Top 10 biggest singles of the 2010s