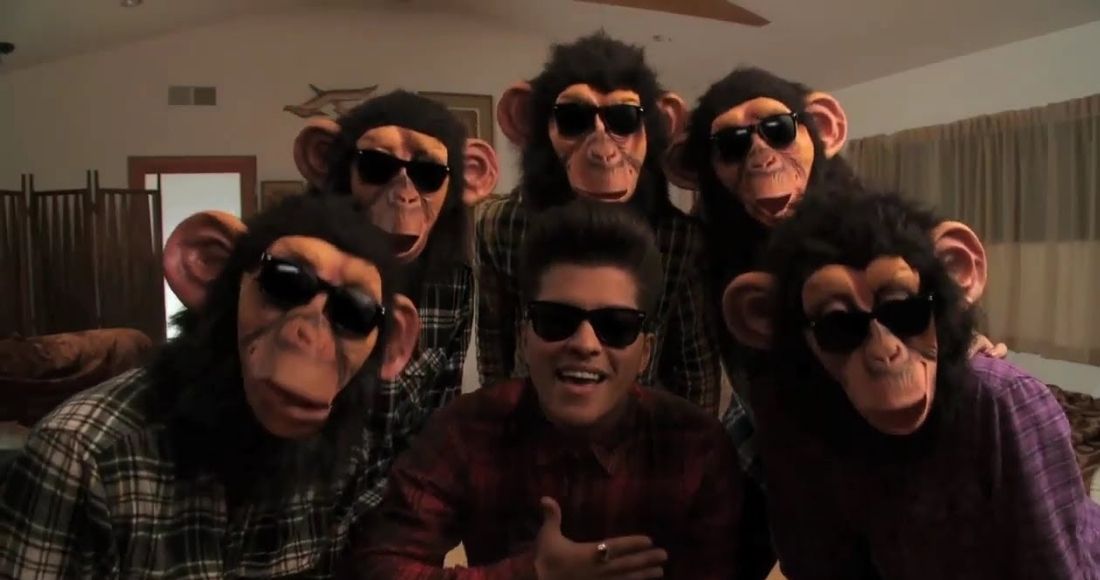 A procrastination anthem for the ages and the song to play when you feel like doing, well, absolutely nothing at all, this week 11 years ago Bruno Mars climbed to Number 1 on the Official Singles Chart with The Lazy Song.

Ascending to the top spot on its fifth week on the chart, The Lazy Song became Bruno's third Number 1 single in less than a year, following Just The Way You Are (Amazing) and Grenade. Since, he's added one more to the tally - 2015's megahit Uptown Funk with Mark Ronson - for a grand total for 4 UK chart toppers.

Built upon a laid-back reggaetón beat, The Lazy Song's chart prospects were bolstered by its proto-viral music video, which saw Bruno and a troupe of dancers wearing monkey masks hanging out in front of the camera with a series of wacky dance routines that were basically TikTok dances before TikTok was even a thing.

According to Official Charts Company data, The Lazy song has UK chart sales totalling 1.2million, and combined across audio and video, has streams in excess of 70 million. It's still popular today too - this year to date, it's gained over 3 million streams.

Elsewhere, the Official Singles Chart was admittedly stacked with bops 11 years ago this week. Pitbull's super-charged Give Me Everything with Ne-Yo, Afrojack and Nayer broke into the Top 10 for the first time, rising to Number 4 (it would eventually peak at Number 1), while Aloe Blacc's future Number 2 hit I Need A Dollar reached a new highest peak of Number 9.

Lady Gaga gained that week's highest new entry, debuting at Number 6 with the wistful Edge of Glory in anticipation of Born This Way's release in the next week. Bad Romance sequel Judas also got a serious uplift, rising back up to Number 11, having previously peaked at Number 9.

Further down the chart, charity collective The Good Child Foundation debuted with their cover of Just Can't Get Enough (30), in a very 2011 turn of events the Glee season 2 cover of TLC's Pretty and West Side Story's I Feel Pretty also proved popular (36) and our final new entry was Paul Hardcastle with 19 (40).

Check out the full Official Singles Chart from this week in 2011 here.