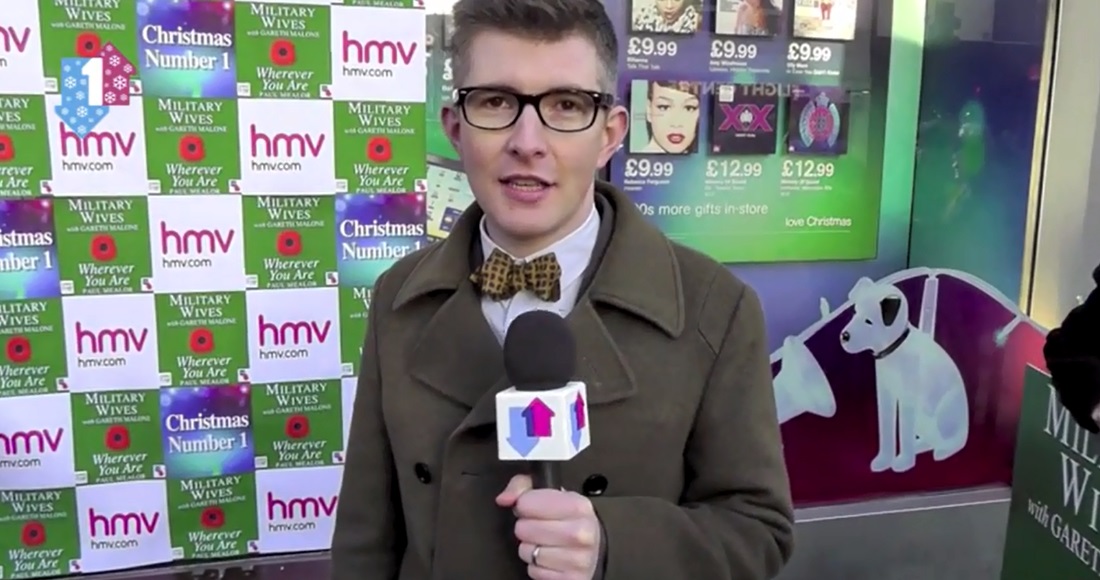 Gareth Malone’s choir of Military Wives are extending their lead in the race for the Official Christmas Number 1 – and are now outselling the rest of the Top 20 combined, the Official Charts Company can confirm.

Malone and the wives began the race for Official Christmas Number 1 yesterday in pole position – and they continue to push ahead with impressive sales of 319,000 copies, based on units sold up to midnight last night. The Military Wives are well on course to become the 60th Official Christmas Number 1 this Sunday – when they will win the first ever Official Singles Chart Number 1 Award. Click here for details.

Official Charts Company managing director Martin Talbot says, “This truly is an extraordinary result for Gareth and his choir – easily now the fastest selling record for years. They are extending their lead day-by-day and breaking records as they go.”

The Military Wives are currently leading the charge ahead of X Factor winners Little Mix by a ratio of 6 to 1. See video here of the moment when the choir and choir leader Gareth Malone learnt they were on their way to Christmas Number 1. Out of all The Military Wives' sales to date this week, 73% have been physical copies, as opposed to digital downloads. This equates to approximately 235,000 copies and a massive 982% week-on-week increase in the CD singles market!

Little Mix's ‘Cannonball’, which sold 210,000 across the whole of last week are in second place on today’s Official Singles Chart Update, with sales of 55,000.

The power of the people puts its festive stamp on today’s Official Chart Update, as the Top 10 is filled with a string of hits by acts without the support of a traditional record label.

Lou Monte’s 'Dominick The Donkey' (3) – a track which has been championed by BBC Radio 1’s Chris Moyles' Breakfast Show, has come from nowhere to clip-clop all the way into the Top 5. The track is being bought by fans from a digital compilation album. Originally released in 1960, the song has never before charted in the UK, in fact, the last known donkey to chart according to the Official Charts Company Archive (yes, we looked into this one while it’s Christmas!) appears to be Muffin The Mule who made a cameo appearance in Peter Kay’s All Star Band as part of the 'BBC Children In Need Medley' in November 2009, charting at Number 1.

Chris Moyles commented 'We've been playing 'Dominick The Donkey' on our show every Christmas for years - our listeners love it! I'm so excited that it's made it in to the charts - consider it my Christmas present to the nation! But don't blame me if you hear it every Christmas from now on...'

Alex Day (4) is a YouTube musician and blogging phenomenon who, though unsigned, has managed to build a fan base to the tune of half a million YouTube subscribers, and has notched up an astonishing 70 million video views on YouTube to date.

Currently achieving more hits per day than Lady Gaga, Alex has now chosen to release his own single, 'Forever Yours'. Marketing it to his fan base , Alex has watched the sales rack up to over 35,000 already this week. The video for the single has scored nearly 2.5m hits already, all without the backing of a record label. Alex popped into Official Charts Company HQ to introduce himself and tell us what it means to him to be in this year’s Christmas Number 1 race. Watch the video here.

Commenting on this week’s ‘People Power’ chart, Martin Talbot says, “In the week that the Military Wives are dominating the festive market, people power is really driving through. Aside from The Wives, who have truly captured the imagination of the public in their own way, Alex Day’s 'Forever Yours', Lou Monte’s 'Dominick The Donkey' and Nirvana’s 'Smells Like Teen Spirit' all demonstrate the power of the public in pushing their favourite records to the top of the Official Chart – the chart that is based on sales, and sales alone.

“All these campaign records demonstrate comprehensively, at the start of its 60th year, that it is not hype, marketing or promotion which decides what records will hit the Official Singles Chart – but the choices of the great British public.”

It’s looking like another strong week of sales for Canadian crooner Michael Buble on the Official Albums Chart Update. After shifting a staggering 269,000 copies last week to score the biggest weekly sales of any album this year, it appears Christmas shoppers have been out in force yet again this week to scoop up another 115,000 albums already this week.

The full Official Christmas Update Top 10s are as follows: