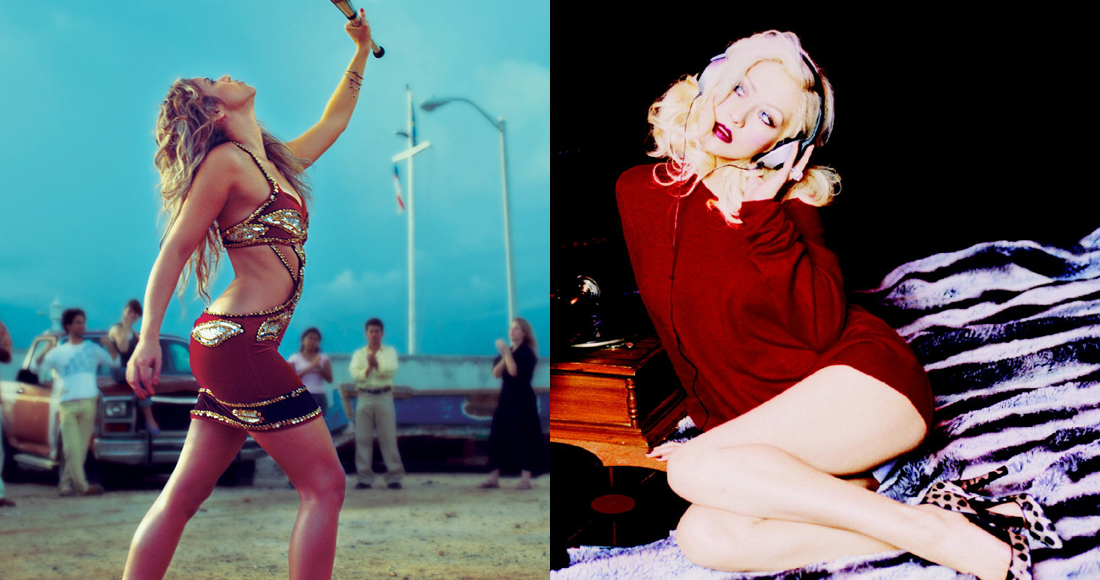 Summer heat does funny things to us when we’re listening to music. Party tunes and songs you want to play over and over again are the order of the day and while we’re slicking on the suntan lotion we’re more likely to go for singalong songs we can lift a sangria to.

This week in 2006 – nine years ago, people, time to reassess those Botox plans – it was the battle of the blond bombshells, and the one you might think would win kind of… didn’t.

Christina Aguilera was back in a big way after the success of her sophomore album Stripped. The global smash, which spawned two UK Number 1s, had sent Christina’s career stratospheric, and all eyes (and ears, because this is music we’re talking about here, obviously) were on her to see what she’d come up with next.

There were promises of a new sound, a concept album and a super-slick marketing campaign to relaunch Christina yet again. Ain’t No Other Man, Christina’s retro love-letter to old-school soul and R&B, had Number 1 written all over it. But the trouble is, to get to Number 1, you have to beat 39 other songs, and you can never tell what’s going to give you a last-minute run for your money.

Which is where Shakira comes in. Bursting onto the music scene in 2002 with her first English-language album Laundry Service, led by the memorable Whenever Wherever, Shakira had just a few weeks earlier scored her very first Number 1 with Hips Don’t Lie.

The irresistibly summery track, featuring a bit of guest artist action from former Fugees frontman and man of the moment Wyclef Jean, meant that after a few years of hits, Shakira finally got her place on the best sunlounger by the pool. After a week, however, her time was up, and Lily Allen’s Smile gave a cracking grin and replaced Shakira. And on previous form you’d have thought that was that. Shakira thought different.

You can’t keep a good song down, and Shakira’s truth-telling abdominal marvels made a triumphant return to Number 1 this week in 2006, leaving Christina a very valiant second.

Despite Christina leaping from Number 18 – thanks to charting on downloads alone the week before – Hips Don’t Lie’s summer heat sizzled at the top spot. This was no flash in the pan, either.

After three weeks in the cold following her first seven days at Number 1, Shakira clung on for dear life, notching up a further four weeks at Number 1. She blocked first Christina, who’d have to wait five more years before she scored another spurned Number 2 hit with Moves Like Jagger, then future collabo pal Rihanna, plus Cascada and Chamillionaire.

Eventually, Shakira and Wyclef lost out to another future team-up pal, Beyoncé, who got some serious Déjà Vu and sent her packing.

Hips Don’t Lie was the first of two chart-toppers for Shakira – she’d have the second with Bey in 2007 with Beautiful Liar – and one of six Top 10s for her.

Christina hasn’t had a Number 1 since Beautiful in 2003, but she did score a million-seller thanks to her guest spot on Maroon 5’s Moves Like Jagger, one of the bestselling records never to reach the top ever. So Shakira and Xtina were making hips swivel at Numbers 1 and 2, but what was happening elsewhere in the Top 10?

5: James Morrison – You Give Me Something

This was the fifth of seven Number 1s for the band – they scored their first just two years earlier, when 5 Colours In Her Hair knocked Usher’s Yeah off the top. Please Please was written about Lindsay Lohan, who the band had worked with on movie Just My Luck. Don't Stop Me Now was originally a Number 9 hit for Queen in 1979.

Get Together was Madge’s 58th Top 10 hit and her third of four Top 10s from Number 1 album Confessions On A Dance Floor. The star wasn't keen on shooting a video for this track, so her performance from the album's promotional tour was given a quick swizz through After Effects and used instead.

Nope, nothing to do with that TV show with hidden cameras in the walls to catch it dodgy builders, Rogue Traders featured former Neighbours star Natalie Bassingthwaite on lead vocals. Voodoo Child peaked at Number 3.

A third Top 10 hit for Kasabian – they’ve had one since, Fire in 2009, which is their highest chart peak so far.

Cheryl scored her fourth Number 1 hit with Crazy Stupid Love going straight in at the top. There were also big songs from Magic, Charli XCX, MK and Neon Jungle (sniff) making an impression on the Top 40.