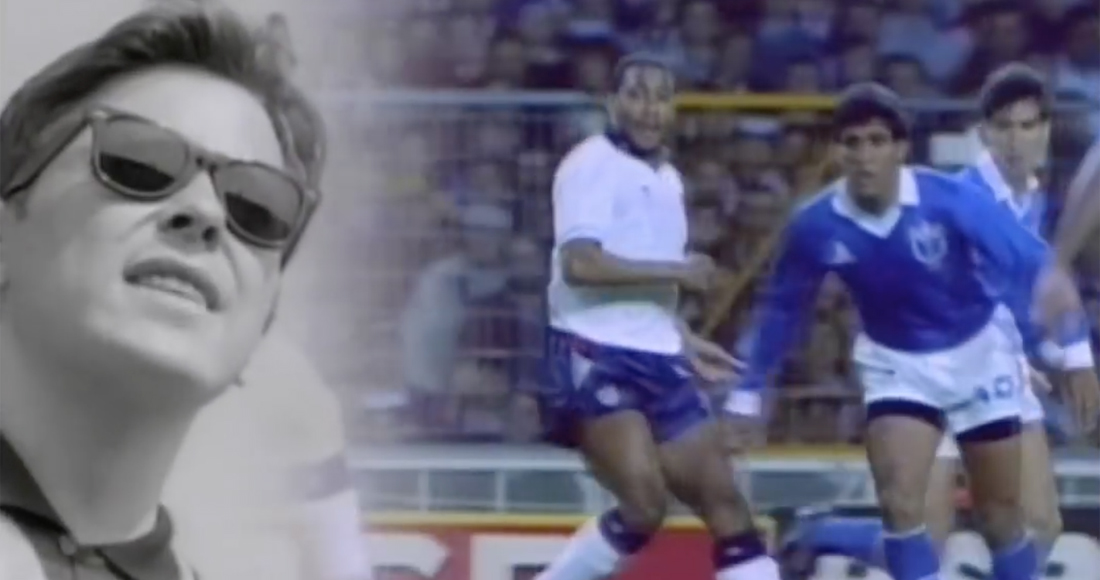 With football heavily in the news over the last few weeks, today we return to a simpler time, with jumpers for goalposts, oranges at half-time and, um, the England World Cup squad trying their hand at rapping.

Traditionally, football-related songs aren’t your usual chart fare, and those that have found success could rarely be thought of as particularly cool. But after years of football teams releasing covers of old rock songs with updated, and increasingly laboured, lyrics, the beautiful game finally had an anthem it could be proud of, not to mention one whose appeal went way beyond football fandom.

Manchester band New Order had been scoring hits since 1980 when, as Joy Division, they reached Number 13 with the now classic Love Will Tear Us Apart. Ten years on, it was time for their first chart-topper when they teamed up with the England football squad, who were all set to try their chances in the World Cup in Italy.

The result, World In Motion, was not your average footie anthem. Reflecting the optimistic vibe of the new decade, World In Motion offered a message of self-belief and determination. Not only that, its middle eight was a rap, impressively delivered by likeable left-winger John Barnes. Let’s just remember the first part of that rap, shall we?

Amazing. With lyrical help provided by Keith Allen, dad of Number 1 popstar Lily, of course, the song was an instant classic and “En-ger-land!” was the chant of the summer. Well, apart from in all the other parts of the UK. Oh, and when England crashed out of the World Cup it kind of wasn't. But until then, definitely. In England only.

This week in 1990, New Order were enjoying their second and final week at Number 1. They’d be booted off the following week by future knight of the realm Elton John with his ballad Sacrifice.

So New Order and England – sorry, EN-GER-LAND – were still scoring at the top of the Official Singles Chart, but what about the rest of the Top 10. Who was in the attack zone?

Click an artist’s name to see their full chart runs in our archive.

Despite that funky video, NKOTB were still pretty B I G this week in 1990, with this their fifth Top 10. They’d go on to have a couple more, but they’d never again better this Number 2 peak.

This former Number 1 gave singer Seal his big break – he provided vocals. He even released his own version of the song in 1991, reaching Number 8. Dance outfit ATB also covered the track, peaking at Number 4 in 2000.

6: Roxette – It Must Have Been Love

Taken from the smash hit romantic comedy Pretty Woman, it Must Have Been love would rate go on to reach Number 3, Roxette’s highest chart peak in the UK out of six Top 10s.

“It’s me again / yes how did you guess / cos last time you were really impressed.” Oh Betty. The first of two top 10s for the fiery, fun star who wold go onto write hits for acts including Girls Aloud. Doin’ The Do peaked here at Number 7 this week in 1990.

9: The Charlatans – The Only One I Know

A very first hit for the Tim Burgess-fronted band, they would go on to have 21 further Top 40 hits, with four going Top 10.

Sisters Carrie and Wendy call Beach Boys’ icon Brian Wilson “Dad” and Chynna’s own parents were both in legendary pop group The Mamas and Papas. With an impressive pedigree, the trio scored their first UK hit with this uplifting, during track that would go on to peak at Number 6. The track returned to the Top 100 in 2011 following its inclusion – and the band’s cameo – in hit comedy Bridesmaids.

A very first Number 1 for global phenomenon Ed Sheeran, who took Sing to the top this week in 2014, thanks to a little help from his old buddy Pharrell. There were also new entries from Neon Brotherhood, Lethal Bizzle, Kasabian and more.