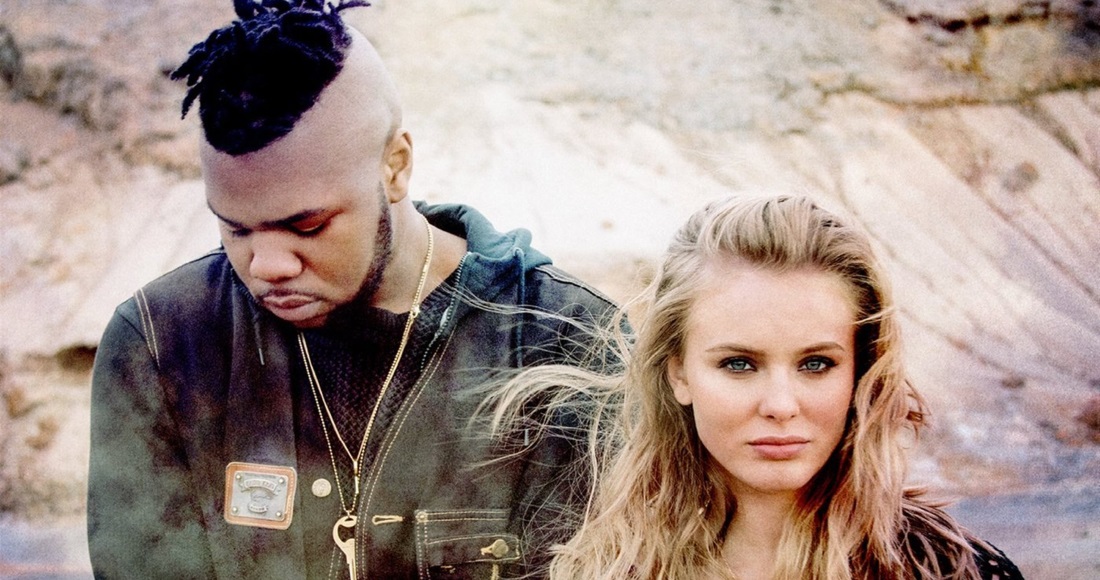 MNEK has already notched up a fair few hits as a producer/songwriter for acts including Little Mix, Gorgon City and Karen Harding, but now he looks set to breakthrough as a singer in his own right with his latest track Never Forget You.

The song features fellow up 'n comer Zara Larsson; a Swedish pop starlet who's already had a fair amount of success in her homeland (including three Number 1s), and the buzz online suggests she's headed for big things elsewhere in 2016.

We sat down with the pair to talk about the song that could be their big UK breakthrough moment.

First thing's first: MNEK, we've noticed that you're growing your hair out. How big are you going to let it grow?

MNEK: I want it big – I want to be able to tie it up… it’s getting there. Maybe me and Zara could do matching hair? I’ll get some blonde extensions put in.

Your new single Never Forget You is amazing, and lots of other people seem to be loving it too, which must be a relief?

Zara: It’s still growing! I’m from Sweden, and it shot straight up to Number 1 there. I couldn’t believe it. We even managed to beat Justin Bieber that week!

MNEK: It’s great to see the song grow over here as well. I was really concerned about going on air on sale with this song, but it seems to really be working out well, which is great.

It’s a big, uplifting dance track that you both co-wrote, but it makes us feel sad. Is everything ok?

MNEK: We’re good I promise! I’m very happy in my life right now. Poignant is the word I'd use to describe this song – a wistful, poignant banger.

Zara: It’s sad, but I don’t feel like it’s heart breaking. It’s more beautiful than it is sad.

How did the collaboration come about? Who made the first move?

MNEK: I was in L.A back in March doing sessions for my album, and the option to get in the studio with Zara came up. I was already a fan of her work, so of course I did it. It was me, her and Astronomyy, and we wrote the whole thing really quickly. We recorded the whole song separately and then the labels decided to make it a duet, which we were really happy about.

Zara: The funny thing is, I didn’t even really know what was going on. It was one of my first sessions ever and I thought it was all about me, because I’ve just started to write. I felt so bad afterwards because I was behaving like it was my session! We worked really well together in the end though.

MNEK - you've helped write and produce some big hits for other artists, but your own singles have fallen frustratingly under the radar. Do you think people are starting to 'get' what  you’re about?

MNEK: Let’s find out! I’ve always had confidence in my material. There’s been a lot of buzz around me for a while, and my songwriting for other artists has generally had a positive reaction, but the response to my own music hasn’t always been as good. People seem to really like this one though, which is great!

This is essentially the first major hit I’ve had as a lead artist, which is great because it means things are growing nicely – and it’s all happening at the right time for me.

And Zara, it must be a nice way to finally kick things off in the UK having released music almost exclusively in Sweden?

Zara: Yes! I’m so excited to get going here. This is the first song me and my label have actually been pushing, except for my first single in other countries. Honestly, I’m keeping everything crossed for a Top 10 with Never Forget You, we’ll see.

Zara: For people who aren't familiar with you yet, which of your songs would you recommend listening to as a starting point?

Zara: That’s hard! Before I released anything at all, when I was 15, we were deciding whether to start big in America or just in Sweden. We decided to start small, and my first EP when to Number 1 in Scandinavia. It was great to release lots of songs there and find out what does and doesn’t work. It was essentially a playground for trying stuff out. In general, Swedish people have great taste in music, so we trusted their response!

Now I feel more secure about my music and how I want it to sound. My first international album is hopefully coming out early 2016, which will be my first real push.

You won Sweden's Got Talent in 2008, years before you released any music. Did that competition give you any insight into the industry?

I was 10 back then! It didn’t really offer any insight, to be honest. I expected to have record deals thrown at me, and no-one wanted to sign me. I was so upset at the time – I remember saying, ‘my career is over – no-one wants to sign me!’, and everyone was like ‘girl, you’re 10!’. It’s since lead to awesome things; the record label I signed with remembered me from the show, though they didn’t sign me because I was on it.

And MNEK… just when are we going to get your debut album?

MNEK: I know, where is it?! I’m still working on it – which I know sounds frustrating as I’ve been working on it for a while. I’m constantly working on new music and my sound has developed a lot since I started. I’ve always been into vintage R&B and ‘90s dance and I think I’ve got to a point where it’s so ingrained in me that I don’t need to do anything pastiche or a copy of a ‘90s tune anymore.

I’m working on the album with a lot of my friends; the big names don’t really appeal to me for my album. What I do is quite specific, so I’d rather work with my friends who get what I want to achieve. Hopefully it’ll be out late next year.

Does this mean you're putting the producing for other artists on the back burner for now?

MNEK: It all depends on what blows up. If this song seriously blows up, then the focus will be put on the artist project. But I also love producing and writing for other people because you get to be so creative with it. I don’t tend to approach people about producing unless I’m excited about it, but I get most excited about working with people the public haven’t heard of yet. There’s less pressure with a new artist and you get to create a whole new sound with them – it really is the best thing.

MNEK & Zara Larsson's Never Forget You is out now.