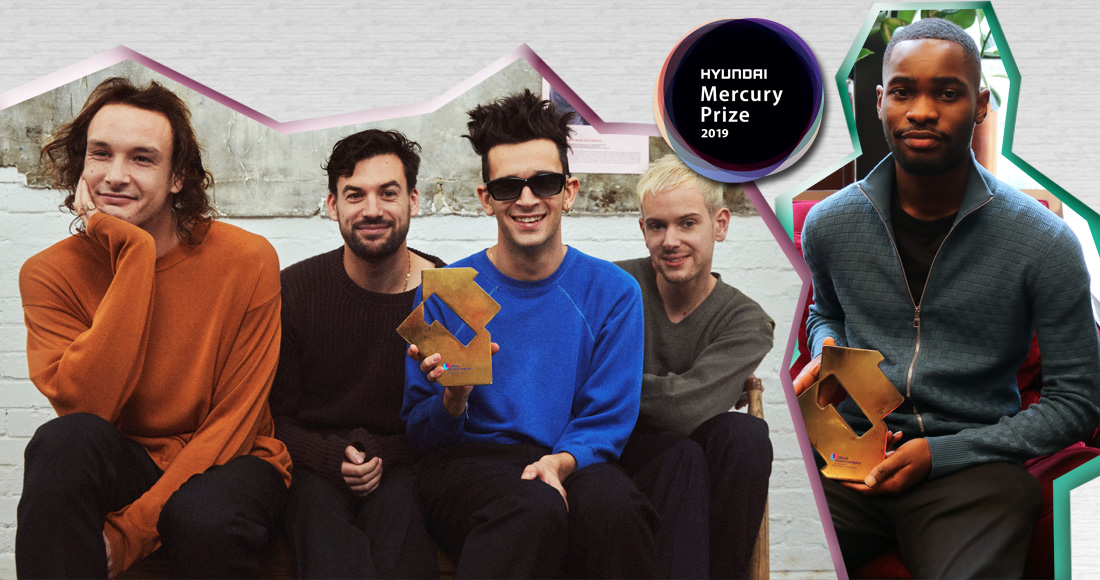 The shortlist for the 2019 Hyundai Mercury Prize has been unveiled.

Number 1 albums including The 1975's A Brief Inquiry Into Online Relationships and Dave's Psychodrama are among the 12 nominees for the prestigious award, now in its 28th year.

The winner will be announced at an event held at London's Eventim Apollo, Hammersmith on Thursday, September 19.

The 2018 Mercury Prize was won by Wolf Alice for their album Visions of A Life, which peaked at Number 2 on the Official Albums Chart.

Below are the 12 shortlisted acts:

Anna's second Mercury nod, Hunter was critically-acclaimed for its take on gender and sexuality. Guests on the album included bassist Martyn P. Casey of Nick Cave and the Bad Seeds and Portishead's Adrian Utley, who plays keyboard. It became Anna's third Top 40 album last September and her highest charting record to date, landing at Number 22.

Geordie, Kevin, Cameron and Morgan released their debut album in July 2019, with Schlagenheim so far peaking at Number 43. The experimental rock album was organically formed during jamming sessions with the band's members playing everything from banjos to organs.

Psychodrama fended off albums by Foals, Dido and Sigrid to claim Number 1 in a busy week of releases in March 2019. The album scored the biggest week of streams ever for a UK rapper, overtaking Stormzy's Gang Signs & Prayer.

Foals – Everything Not Saved Will Be Lost Part 1

Foals' fifth studio album spawned the singles Exits and In Degrees and peaked at Number 2 on the Official Albums Chart back in March, marking the band's fifth consecutive Top 10. Everything Not Saved... is the best-selling vinyl album released in 2019 so far by a band.

The Irish group's debut album, Dogrel topped out at Number 9 on the Official Albums Chart. The punk album chucks Irish music stereotypes out of the window, tackling anglophobia and capitalism.

IDLES – Joy as an Act of Resistance

Universally lauded by critics, Idles' second album made an impressive Number 5 debut on the Official Albums Chart last September. The post-punk collection is summed up perfectly by the album's cover, depicting a fight that has broken out at a 1960s wedding. Expect conversation about immigration, toxic masculinty, grieving parents and Brexit over violent drum beats and blaring riffs.

"I'm Jay-Z on a bad day, Shakespeare on my worst days", Little Simz raps on Grey Area's lead single Offence. Grey Area oozes confidence throughout as Simz takes an unapologetic journey through topics such as female empowerment and the untimely deaths of Amy Winehouse and Jimi Hendrix.

slowthai – Nothing Great About Britain

With an album title that clearly doesn't mince its words, slowthai's Top 10 debut album straight up calls people out. Poverty, the class divide and the monarchy are all talking points on the Brexit Bandit's Sex Pistols and The Prodigy-influenced record.

The 1975 – A Brief Inquiry into Online Relationships

A Brief Inquiry into Online Relationships became The 1975's third consecutive Number 1 album in December 2018. The album sold just over 7,000 copies on cassette in its first week of release, making it the fastest-seller on the format since July 2002.

Vote for you who think should take the crown in our poll.

Look back at every past winner of the Mercury Prize in our gallery below.