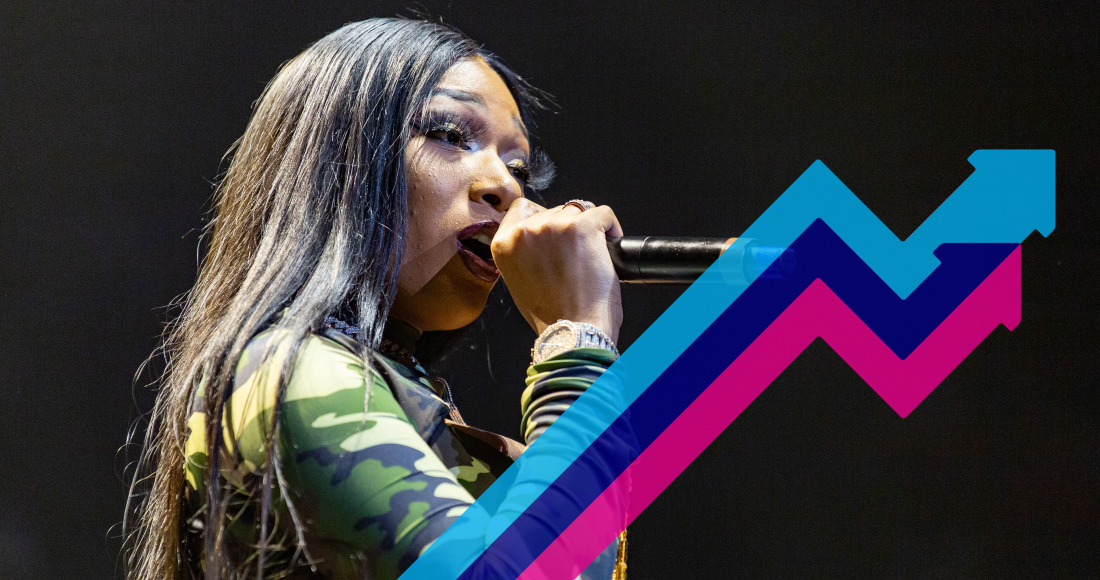 Rising US rapper Megan Thee Stallion leads this week’s Official Trending Chart with viral sensation Savage, as she gears up to claim her first UK Top 10 single with the track.

Savage has been rising through the ranks of the UK Top 40 for several weeks now - since it originally went viral on Tiktok – but has seen an extra boost in sales and streams this week after Queen Bey herself hopped on a remix released last week (April 30), which Megan said was “a dream”.

Four verses have been contributed by Beyoncé to this new version, and both artists, who were both born and raised in Houston, Texas, are pledging their portion of the song’s proceeds to a Houston disaster relief non-profit called Bread of Life. The organisation saw a flood of donations following the release of the song.

Savage is currently on course to gallop all the way into the Top 10, at Number 4 midweek, and is Megan Thee Stallion’s highest charting song to date; her only other UK chart hit, Hot Girl Summer ft. Nicki Minaj, peaked at Number 40 last August.

Meanwhile, Drake claims two spots on the Trending Chart following the surprise release of his latest album Dark Lane Demo Tapes, which is expected to debut at Number 1 on the Official Albums Chart this Friday. Chicago Freestyle ft. Giveon and Pain 1993 ft. Playboi Carti both feature on the album and are proving to be favourites on the album.

London native AJ Tracey gets fancy with his new single Dinner Guest ft. Mostack, which has already clocked up over a million streams in the UK alone since Friday (1 May). DaBaby’s Rockstar ft. Roddy Ricch sees big growth this week, and actress, presenter and singer Amanda Holden’s charity single Over The Rainbow also makes an impact.

Finally, two iconic British bands make a return, as Queen & Adam Lambert release a new quarantined version of one of their biggest songs, You Are The Champions, in an ode to healthcare workers.

Additionally, a lost demo by Oasis, Don’t Stop… was recently unearthed by Noel Gallagher when he “stumbled across an old demo which [he] thought had been lost forever”.

Follow and listen to the Official Trending Chart on Spotify here, or listen on Deezer.