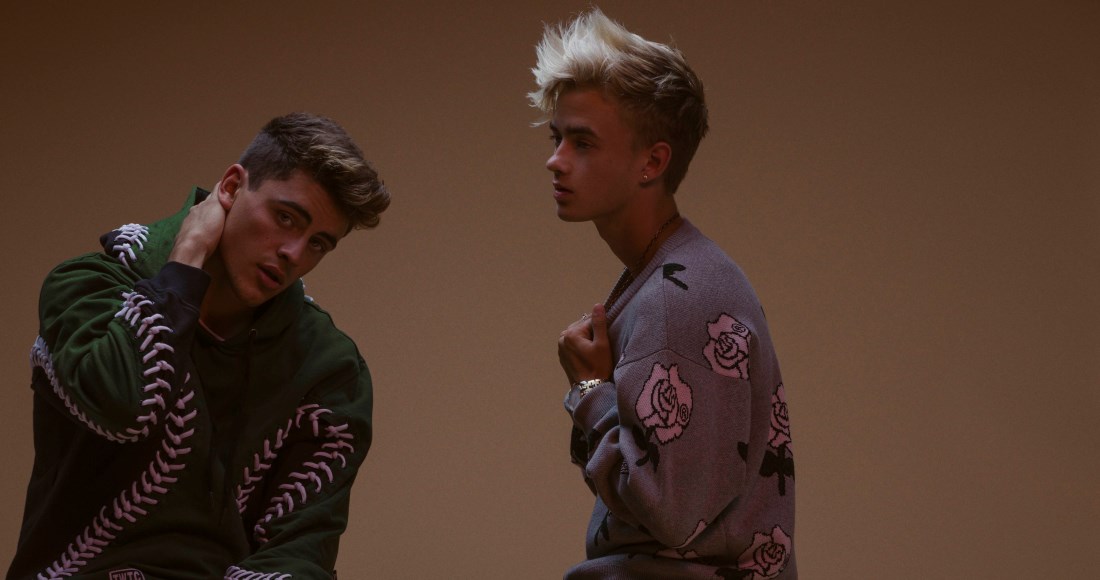 Jack & Jack have had a whirlwind few months. The lifelong pals, who feature on Jonas Blue's Top 3 single Rise, first found a following on the now-defunct app Vine in 2014 before signing to Island Records early last year.

Since then, they've released two EPs of infectious pop-rap, which led them to being approached by British producer Jonas for his latest track. The song and its music video, they say, was completed in a matter of hours, but its impact on the charts has been lasting.

We spoke to the duo, Jack Johnson & Jack Gilinsky, about their influences, album plans, and what sets them apart.

"We hadn't even met in person before the video", Johnson explained. "Flying from from London to Lisbon for the video, I was sat next to Jonas, and honestly, I don't even know if I knew [what he looked like]... or if we had even looked each other up. We were both like 'wait, are you...?'

"It's funny because we had no idea what he looked like or what age he was!" Galinsky adds. "But those three nights we had together in Portugal, we just had great times. And it ended with us performing it at a massive Portuguese festival before the song was even out. It was awesome."

Galinsky: "At the top of our minds, we're thinking of singles and we have two songs that lead up to an album in the next six months. We hope for the best, but regardless of how these singles do, we will be dropping our first project."

Johnson: "We don't want to just be known as a singles type of group. I think that's really important. As important as radio is, we don't just want to solely exist in that world. We want to have those tracks that go deeper too."

Galinsky: "I feel like that's how you make a real die-hard fan, you know? Even though we have those and we love them because they just love us for who we are, but we want to put out a body of work because I know that any artist that I've fallen completely in love with, I've loved them because of their project."

Galinsky: "So many people have inspired us. Even if it affects our music in that we make music like they do, any song you hear, you take something away from it. Even artists like Blink 182, or U2, Tom Petty or AC/DC, we don't make music that sounds like those people, but we still draw from them to make music because that's how we were raised."

Johnson: "Sometimes even people's attitudes. You can take how they carry themselves, draw from their interviews. There are always other elements you can draw inspiration from."

Galinsky: "We're a little different just because we met on the very first day of kindergarten. I was four and Johnson was five and that chemistry is what sets us apart. We have been friends for 80% of our lives, it's unreal. We are the same human at this point."

Johnson: "And we love the same music. A lot of groups are driven apart by creative differences but I feel me and Jack are on a symmetrical, creative wavelength. And it's cool to have two tones to work with. With G as the singer and myself as a rapper, the dynamic is open-ended and we can play with it at our own will."

Future collab plans? They have their eyes on Childish Gambino and Halsey

Galinsky: "There are so many awesome people right now, but I would love to work with Childish Gambino."

Johnson: "He can really bend genres and there's no box you can put him in and I really respect that. I would also say Anderson .Paak. I love his tone and he's truly my favourite artist from the last 2-3 years. Also, there's a rapper called Saba from Chicago, I'd love to get a verse of his on a song."

Galinsky: "Someone who is killing it right now who is world famous like Halsey. She has such a dope tone and I've come to really enjoy her voice. That'd be tight."

Jack & Jack’s latest single Stay With Me, and Rise with Jonas Blue are out now.