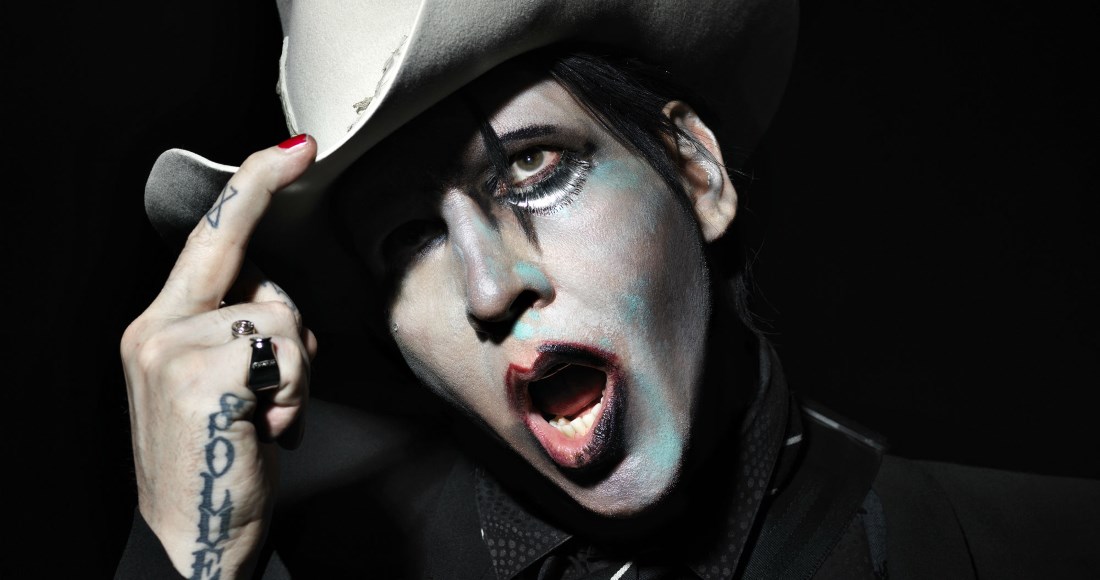 Marilyn Manson has been one of popular music's most fascinating stars for three decades and he continues to captivate with his new album.

Marilyn - lead vocalist of his mononymous rock band - is back with his eleventh studio album, which is set to become his highest-charting in the UK for almost 16 years. See how all of Marilyn's hit singles and albums fared on the UK's Official Charts.

To commemorate the release of the God Of F***'s new record, we look back at his most popular songs in the UK, ranked by sales and streams.

This GRAMMY nominated song was one of Marilyn's highest-charting in the UK, one of two from the gothic star to aptly peak at Number 13. Inspired by Oscar Wilde and an elephant stampede (what an iconic combo), this rock stomper combines heavy endorphin-pumping guitars with a chorus of cheerleaders to create a memorable classic. One of seven Top 20 hits for Marilyn, mOBSCENE has racked up 3.8 million streams and just shy of 50,000 paid-for sales.

Marilyn has a knack for drenching pop classics in black and giving them the dog collar treatment, with Depeche Mode's Personal Jesus being one of them. A gritter interpretation than the original with Marilyn's hoarse vocals creating a macabre undertone, Personal Jesus has been played 4 million times in the UK since streaming data was first began being counted in 2014, with 78,000 of you picking up a CD single or download.

3. Sweet Dreams (Are Made Of This)

Taken from 1995's Smells Like Children which is an EP of covers, Marilyn's take on the Eurythmics' Number 2 smash was rejected by his then label Nothing Records as a single, but he fought against them and the result is major success on a platform that wasn't even thought about back in the 1990s; Sweet Dreams is now Marilyn's most streamed song on Spotify globally.

The song never charted on UK soil but it is Marilyn's most streamed video by the British public. To date, Sweet Dreams has generated 11.6 million streams (audio and video) and amassed 79,000 downloads.

Marilyn's biggest original song in the UK, The Beautiful People is based on Marilyn Bender's 1967 book of the same name, and is Manson's condemnation against the elite classes. The 1997 hit is Marilyn's most streamed song in the UK 24 years on from its release, clocking up 12.5 million plays and a modest 96,000 paid-for sales. It's combined sales total stands at 207,000.

Marilyn's version of the Gloria Jones song - then brought to prominence in 1981 by Soft Cell - is his biggest UK hit and highest charting song. Boosted by a bizarre music video with Marilyn frolicking in a hot tub and having a slumber party with lingerie-clab rabbits and placement in the film Not Another Teen Movie, Tainted Love peaked at Number 5 on the Official Singles Chart in 2002 and has combined sales of 379,000, split between 270,000 CD and download sales and (despite its music video not being officially on YouTube) an impressive 11.3 million streams.