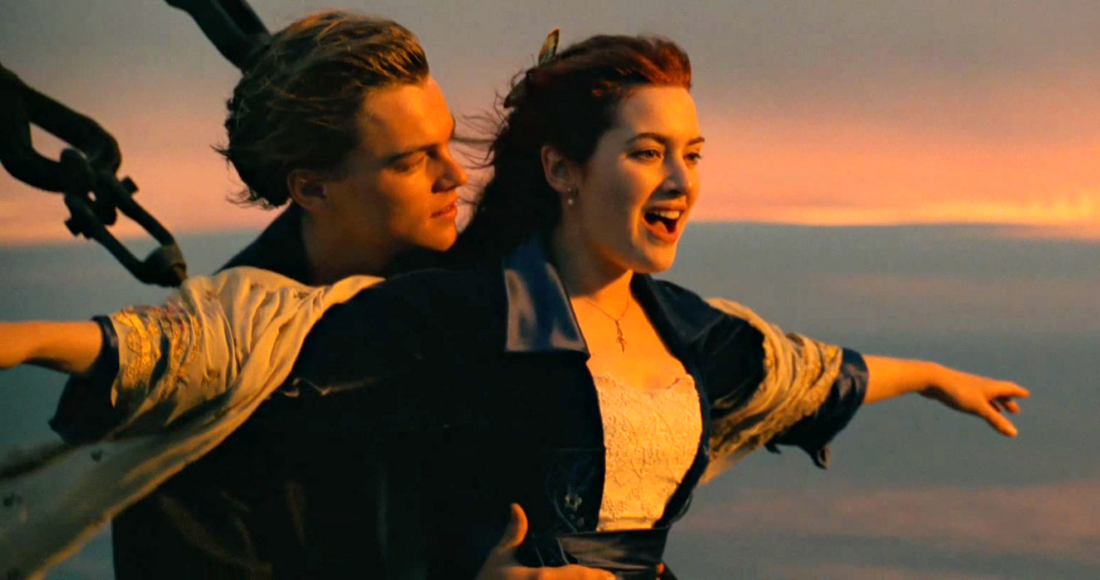 As the world prepares to blush uncontrollably at the release of movie 50 Shades Of Grey, songs from its soundtrack are beginning to make an impact on the Official Singles Chart. The Weeknd’s Earned It was a new entry last week, and Ellie Goulding is on course to debut at Number 1 this weekend with Love Me Like You Do.

Plus, with the Oscars on their way, we’re feeling ever so Hollywood. We take a look at some of the biggest or best-loved songs from soundtracks that have done some serious chart business over the years – including some you may not have realised owed their success to the movies. What’s your favourite?

Despite 12 Top 40 entries, a Top 10 had eluded R&B’s slickest lady Aaliyah, until she unleashed this futuristic Timbaland jam and peaked at Number 5 in 2000. The movie it came from, Romeo Must Die, is, perhaps unfairly, largely forgotten, but the soundtrack would’ve been all the poorer without Try Again.

Its success is tinged with sadness, however – it would be the last Top 10 hit that Aaliyah would achieve in her lifetime.

Oh, we don’t know this one. Who is this? JUST KIDDING. It’s the soundtrack to not only Disney modern classic Frozen but also a million children’s birthday parties and many frazzled parents’ car journeys. Despite finishing the 10th bestselling single of 2014, Let It Go never reached the Top 10!

Seal – Kiss From A Rose

Sometimes you need a movie to make the world sit up and take more notice of a song. Kiss From A Rose originally reached Number 20 on first release in 1994, but add some bat ears, a cape and a brooding Gotham City and you have yourself a Top 10. Featuring on the soundtrack to Batman Forever, the third movie in the original reboot of the franchise, Kiss From A Rose reached Number 4, scoring Seal his third Top 10 (fourth if you count his uncredited Number 1 Killer with Adamski, which we probably should, really).

Not all movie soundtracks have to be slushy and romantic. Rapper Coolio found instant fame, and scored a million-selling hit, with this Stevie Wonder-sampling track from Michelle Pfeiffer movie Dangerous Minds. Michelle even turned up to be in the video. Nobody who was a fan of this song when it spent two weeks at Number 1 in 1995 can ever forget the verses – they’re ingrained in our hearts.

Now this is one song that the British public can’t get enough of. Unchained Melody has charted for seven different artists, missing the Top 10 for only one of them (sorry, Liberace, in 1955). It has hit the Number 1 spot an incredible four times, but it is Righteous Brothers’ 1990 chart-topping time we’re interested in here, as it came from the soundtrack of Ghost, starring Demi Moore, Whoopi Goldberg and Patrick Swayze.

On original release, the Brothers’ version stalled at Number 14, but thanks to the movie soared to Number 1 25 years later, spending a month there, selling over a million and becoming the bestselling single of the year.

Madonna – Crazy For You

It’s one of Madge’s best-known ballads, but from a movie soundtrack, really? Yes, really! Crazy For You was taken from pretty ropey movie Vision Quest, which was later renamed Crazy For You when the song was a huge hit.

Madonna had a small role as – you guessed it – a singer, and took this song to Number 2 not once, but twice. It first hit the runner-up spot in 1985 and did exactly the same on rerelease in 1991. Crazy!

Berlin – Take My Breath Away

One risk of agreeing to do a song for a movie soundtrack is that it’s all you’ll be known for, and Berlin know better than most – although they’ve done OK with it. The love theme to the Tom Cruise star-making movie Top Gun, Take My Breath Away was a hit twice: first spending a month at Number 1 in 1986, before returning for a Top 3 placing four years later.

If there’s one thing the Bee Gees know how to do, it’s how to have a hit off a soundtrack. The brothers Gibb had the lion’s share of the soundtrack to iconic disco movie Saturday Night Fever, landing five Top 5 hits themselves from it Jive Talkin’ (5), You Should Be Dancing (5) – both released before being featured on the movie), – How Deep Is Your Love (3), Stayin’ Alive (4), Night Fever (1).

They also penned two songs from the soundtrack which were hits for others – Yvonne Elliman’s If I Can’t Have You (4) and Tavares’ More Than A Woman (7).

CHART FACT: All but one of the seven singles sung or composed by Bee Gees from Saturday Night Fever have been covered and were Top 40 hits again. Of these covers only How Deep Is Your Love made it to Number 1– and that was thanks to Take That.

Something of a surprise Number 1 for these formerly weird but still wonderful rockers, who first charted in 1969 as Jefferson Airplane with album Bless Its Pointed Little Head (yes, really). It was as Starship they enjoyed the biggest success, hitting Number 1 with this track from Kim Cattrall movie Mannequin, about, well, a mannequin who comes to life. You had to be there.

Starship ruled the Number 1 galaxy for a month in 1987 and never made the Top 40 again… until Nothing’s Gonna Stop Us Now made a surprise return in 2013 after being featured in an ad.

Celine Dion – My Heart Will Go On

Big movies need big songs, and there was no way waterlogged blockbuster Titanic was going to be a damp squib. Celine Dion’s My Heart Will Go On was her second Number 1, and was so beloved it topped the charts twice, after being interrupted by Cornershop’s Brimful Of Asha and Madonna’s Frozen. And, yes, it’s a million-seller – one of two for our Celine. (Think Twice is the other.)

Slim Shady acts all though, but with this song he really had to act, playing a version o himself in the story of his life, 8 Mile. Lose Yourself gave Emimem his fourth UK chart-topper – his first in the US – and also won him an Oscar. He didn’t bother going to pick it up, though – he was watching cartoons with his daughter.

We can’t talk movie hits without this million-selling feel-good anthem from the guy who pretty much owned 2013 and 2014 in the chart stakes. It was Pharrell’s third million-seller in less than a year, topped the Official Singles Chart three times, and was named the UK’s most downloaded track of all time in September 2014. Oh, and it was from a film: Despicable Me 2, to be exact.

Cher – The Shoop Shoop Song (It’s In His Kiss)

Incredibly, this track was Cher’s first-ever solo Number 1 in the UK. Yes, despite being a chart presence since 1965, it took this classic cover, from the soundtrack of Cher vehicle Mermaids, to give the star a chart-topper. She’d hit Number 1 before, of course, with ex-husband Sonny on I Got You Babe, but this was all her own.

And it wouldn’t be her last… there were two more. Believe would be the biggest; it’s the bestselling single by a female in the UK ever, and was Number 1 for seven weeks in 1998. The video for The Shoop Shoop Song is worth watching alone for the fact that Cher’s co-star Winona Ryder would quite obviously rather be anywhere else.

Whitney Houston – I Will Always Love You

Hankies at the ready for Whitney’s classic from her movie The Bodyguard, from one of the biggest movie soundtracks of all time. It was Number 1 for an astonishing 10 weeks, sold over a million copies, was Christmas Number 1 and was the last of four chart-toppers for the much-missed star.

There was something strange in the neighbourhood, all right, but it wasn’t this million-seller and first of only two hits for our Ray, from the blockbuster movie of the same name. And, brilliantly, the cast actually star in the video. An all-female remake of the film is in the offing – will this classic tune get a refresh too?

Bryan Adams – Everything I Do (I Do It For You)

Two things you couldn’t much escape from in 1991, the twang of Robin Hood’s bow and arrow in Kevin Costner’s blockbuster movie Prince Of Thieves, and Bryan Adams’ heartfelt ballad off the soundtrack. The UK spent an entire summer keeping Everything I Do (I Do It For You) at Number 1, with an uninterrupted run of 16 weeks making it the longest ever. Needless to say, the song is a million-seller.

Wet Wet Wet – Love Is All Around

Originally a Top 5 hit for the Troggs in 1967, it took a global smash hot movie and four guys from Scotland to turn Love Is All Around into a million-selling, chart-dominating smash. Four Weddings And A Funeral was captivating cinemagoers across the UK, who all appeared to be nipping straight over to the record shop as soon as the credits rolled.

The song was Number 1 for 15 straight weeks until Wet Wet Wet decided enough was enough and had the song deleted, which meant no new copies were made – we know, this doesn’t really ‘compute’ in a digital age. It meant Bryan Adam’s 16-week run went unchallenged and, more importantly for all our sanity, Love Is All Around finally dropped down the Official Singles Chart.

For their first proper outing as a trio, following the departure of, over the previous few months, no fewer than three former members, Beyoncé, Kelly and Michelle came back fighting. Soundtracking the kung-fu kick-ass girl power flick Charlie’s Angels. I

ndependent Women scored Destiny’s Child their first-ever UK Number 1 in 2000. And Bey has never forgotten it – she has been known to sing the odd verse or two, most notably at her Glastonbury and Super Bowl shows.

A third and final chart-topper for the Brummie reggae masters, this Elvis cover topped the charts for two weeks in 1993 and was indeed from a movie. The song featured in saucy thriller Sliver which starred Sharon Stone and Billy Baldwin – now how ‘90s does this film sound? Very. UB40 do have a million-seller, but this wasn’t it. Red Red Wine did the business for them.

Huey Lewis & The News – The Power Of Love

One of three songs called The Power Of Love to hit the Top 40 in the Eighties – and the only one not to hit Number 1, this song was taken from the soundtrack to hit movie Back To The Future, and appeared in some form in all three movies.

BONUS FACT: Back To The Future Part II saw our hero Marty McFly travel forward in time on a mercy mission to deal with his future kids. The year? 2015. (Yes, we know – Everyone on Twitter)

Only 11 Bond themes have reached the Top 10, the first being Paul McCartney & Wings’ Live And Let Die in 1973., and none of them have reached Number 1. The closest one has come is with Adele’s Skyfall in 2012, and Duran Duran’s A View To A Kill from 1985, both of which peaked at Number 2.

Adele gets her moment in the sun here, of course, because Skyfall became the first Bond theme to win at the BRIT Awards, the Golden Globes, the Oscars and the Grammys. Impressive.

We know there are loads more we could’ve mentioned – any faves you’d like to see in a follow-up? Just get involved on the conversation on Facebook and Twitter and your favourite soundtrack staple might get a leading role!