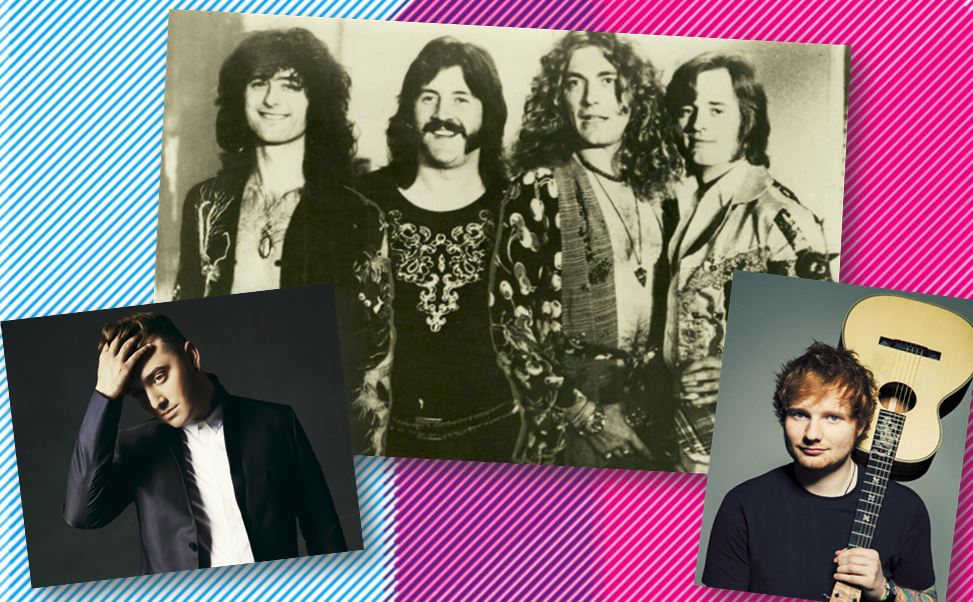 Led Zeppelin are challenging Sam Smith and Ed Sheeran for Number 1 album honours this week, in the first Official Albums Chart to incorporate both audio streams and sales.

The Official Charts Company confirmed a fortnight ago that the chart published this Sunday would be the first to reflect audio streaming of albums from the likes of services such as Spotify, Deezer, Google Play, Napster, O2 Tracks, Xbox Music, Rdio and Rara – and, at the half-way stage this week, the legendary rock act is leading the way ahead of new Brit superstars Sam and Ed, in second and third place.

Zeppelin’s Physical Graffiti  is at Number 1 after three days’ sales and streams have been counted, ahead by a combined sales and streaming lead of less than 1,700 copies, with Smith’s In The Lonely Hour in second, Sheeran’s X in third, and Chris Brown vs Tyga’s Fan Of A Fan: The Album in fourth.

A favoured act of record collectors, physical sales of the Led Zepp reissue are currently outstripping their nearest chart rivals by almost two copies to one. However, will this edge be enough to hold off competition from a raft of streaming-friendly acts and BRITs nominees through to Sunday’s final whistle?

The race is most certainly not over yet, with Sam Smith and Ed Sheeran likely to see a sales and streaming boost later in the week following their respective performances at tonight’s BRIT Awards 2015 (February 25).

Led Zeppelin are among the Official Albums Chart’s all-time greats, with eight Number 1 albums to their name – their eight successive albums from 1969’s Led Zeppelin II through to 1976’s In Through The Out Door. Physical Graffiti, which has already claimed a Number 1 in the Official Albums Chart, almost 40 years ago in March 1975, has been re-released for its birthday with remastered and previously unreleased tracks. Click here to check out Led Zeppelin’s full week-by-week chart history.

In contrast, Smith and Sheeran are among the biggest new artists of their own generation, with both acts expected to dominate tonight’s BRITs.

Audio streams were successfully added to the UK’s Official Singles Chart in July 2014 and streams are being added to the Official Albums Chart using a similar methodology, more details can be found here.

Rock band Black Star Riders are new at Number 5 with their second album The Killer Instinct, and London duo Public Service Broadcasting land at 6 with The Race For Space.

US Rapper Big Sean is on course for the highest-chart album of his career with Dark Sky Paradise at 18, German rockers Scorpions are new at 20 with their 20th studio album Return To Forever, and London heavy metal band UFO start at 26 with A Conspiracy Of Stars.

Elsewhere, Kid Rock's Everything Ever Written (28), Eagles' Hotel California (35), Falling In Reverse's Just Like You (37) and Darlia's Petals (40) are all on course to enter this week's Top 40.