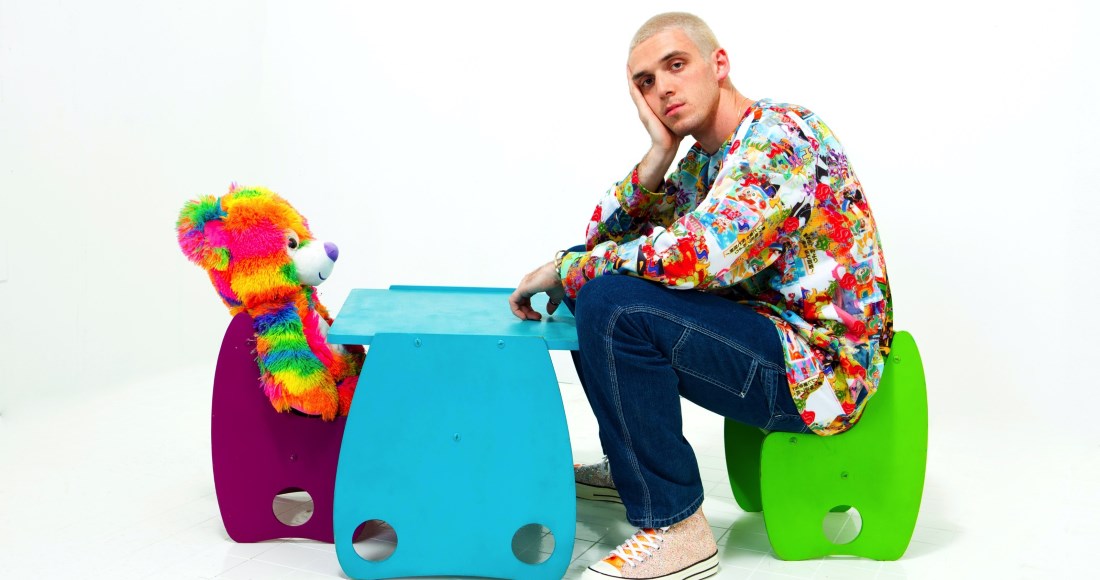 Given that Lauv's debut album is called How I'm Feeling, our first question for him had to be how he's feeling now that the record is finally out.

"I am feeling everything at once!" Lauv, real name Ari Leff, tells us when we met up with him in London. I feel every moment changes. I'm crazy excited and not nervous at all, and then I'm super nervous the next. It's shifting constantly. Things hit me really weird. He points to a magazine he is on the cover of. "Seeing my face on all this sh*t... I don't even know how to react to it. It's so weird. I'm just like, 'argh, what's happening?!'"

While he may not know how to handle seeing his face on digital billboards in Times Square and hearing himself on the radio in an Uber, we caught Lauv at his most chill. Relaxed in an oversized yellow sweater and tie-dye style sweatpants, his outfit mirrors the mellow and comforting sound of his debut album. How I'm Feeling is a 21-track collection with relatable lyrics and a mid-tempo vibe that makes you feel so laid-back, you're proverbially horizontal.

MORE: The top Lonely songs on the Official UK Charts

Lauv has been on a slow burn to success. After releasing his huge streaming hit I Like Me Better in 2017, the 25-year-old has become one of the biggest independent artists in the world. His chart breakthrough came with Troye Sivan collaboration I'm So Tired... which went Top 10 on the Official Singles Chart last April.

Here's what we learned from our chat with the shy and self-deprecating singer-songwriter.

The playlist vibe of How I'm Feeling occurred naturally and organically

21 songs sounds like a daunting prospect to listen to on first judgement, but with a snappy song lengths and a sprinkling of guest artists like Anne-Marie, Alessia Cara, and LANY, there's an eclectic feel to the record keeps things fresh, with the array of vocalists feeling like a rundown of hot hits. But was that a deliberate move?

"No it actually wasn't. First it was going to be 15 songs and then it just evolved and kept going and going and going. I never set out to make certain collabs - except Chris Martin from Coldplay, that has to happen - but everything else has been super natural. For example, I just met Troye [Sivan] at a rehearsal space, then played a show together and said 'let's vibe in the studio'. We weren't even talking about singing together. Then we made I'm So Tired... and made it a duet.

"Each one happened in their own way. BTS and Anne-Marie were through the internet, although the difference was I met BTS before the song and met Anne-Marie after the song, which is crazy. But I'm super timid with my approach. I was chatting with Alessia [Cara] the other day and I'm just like 'when will this fantasy end and why do you want to work with me?' I feel lucky to be here."

Lauv was approached by Celine Dion to pitch tracks for her latest album Courage. He obviously jumped at the chance to collaborate with the legendary singer, who then released his song Imperfections as a single from the record. So how does it feel to have Celine Dion singing a song you wrote about your own life?

"It's crazy! I've gotten to the point where I have trouble writing without it being for myself. Sometimes though a song just doesn't feel as personal to me or doesn't fit with what I want to put out right now. With Imperfections, I tried to write from an authentic place in my life but it ended up being just a little less personal and a little bit less of 'I need to sing this'. Then Celine heard it and she loved it. I forget that it was on a Number 1 album!"

Lauv bigs up some of his friends for having the ability to make a hit for anyone, but he's honest in that a song has to begin authentically about his mindset. We asked him if he thinks that when you actively chase a hit, it's not going to happen...

"Yes. 100%," Lauv says rapidly, before correcting himself. "Actually I wanna rephrase that. I have friends who are massive hit machine songwriters - so talented. But me? I can't do that. Before I was an artist I used to try and do that... and it never worked. It's almost like getting pee shy. I put too much pressure on myself and then I get nothing."

Lauv is not one for wasting time in a song

All but one of the tracks on How I'm Feeling hovers around the three-minute mark, which is a sweet spot Lauv has figured out he prefers. He doesn't want fans to get bored.

"I'm very picky and critical when it comes to my own sh*t," Lauv admits. "If I'm listening to a song and I'm getting to a point where I'm starting to disengage, then there's a problem. [Song lengths] just naturally happen because of my tastes. With I'm So Tired... for example, there's a longer version out there that has a bridge, but every time I would listen to it, it was just too long. I wanted to make it more replay-able, so that's what happened with that."

Normalising the conversation around mental health is central to his album and life outside of music.

With tracks F**k I'm Lonely, Lonely Eyes, Modern Loneliness and Sad Forever on his album, the subject of mental health is central to How I'm Feeling. Beyond his music, Lauv regularly has open discussions with fans about mental health on social media and has even done guided meditations. He also set up The Blue Boy Foundation, which supports initiatives to help young people reach out for mental health help.

"When I see artists [discuss mental health] I really respect it. Having an audience, you have so much power to make a change. There's so much f**ked up s**t happening. I feel like instead of just making everything vanity and 'look at me, look at me', I want to use my platform at least a little bit for things that might help other people. Which is why I started my foundation.

"It just so happens that my first project, it was all about a relationship and my fans would come up to me and be like 'you got me through my break-up'. Now writing songs like Sad Forever and Modern Loneliness, people are talking to me on a much deeper level about helping them get through serious depression and not wanting to live. I'm just trying to do as much good as I can."