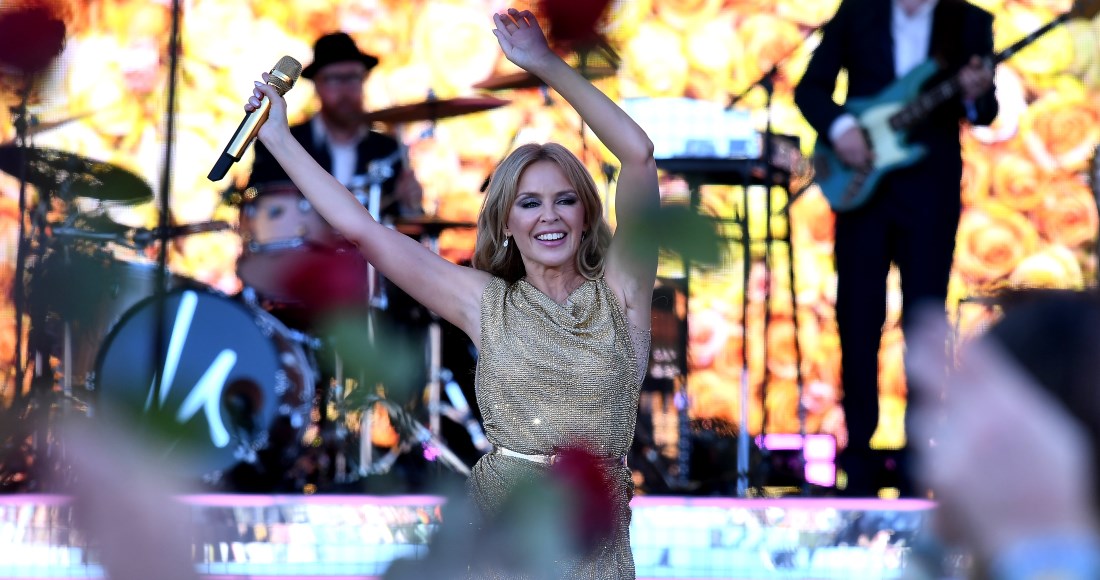 Kylie Minogue is racing towards a seventh UK Number 1 with her brand-new album Step Back In Time – The Definitive Collection.

Kylie leads her closest competitor, Lewis Capaldi’s Divinely Uninspired To A Hellish Extent (2), by more than 2:1 on today’s Official Chart Update. The collection was released two days before her performance at Glastonbury in the coveted Sunday ‘legends’ slot.

Kylie last reached the Official Albums Chart top spot in June 2018 with Golden. The star currently has six Number 1 albums to her name, spanning the last four decades. Step Back In Time features all seven of her UK chart-topping singles and a further 23 Top 10 hits.

There’s also good news for Glastonbury’s Pyramid Stage headliners The Killers, who are set to return to the Top 10 following their Saturday set. The band’s best of Direct Hits flies 47 places to Number 8 with a week-on-week combined sales boost of 375%, while their debut album Hot Fuss could return to the Top 100 for the first time since July 2017, currently at Number 43 (up 357%).

Friday night headliner Stormzy is at Number 14 with his debut album Gang Signs & Prayer, leaping 59 places (up 314% on last week), and The Cure are expected to return to the Top 40 following their Sunday headline slot – the band’s Greatest Hits is currently at 45 (up 137%).

Meanwhile, The Black Keys are on course to claim their third Top 10 album with Let’s Rock at Number 3, ahead of Chris Brown’s latest record Indigo at 4, which could be his seventh Top 10 album. Hank Marvin’s new three-disc collection Gold is at Number 6 at the midweek stage.

UK drill star K-Trap starts at Number 29 with his latest mixtape No Magic, currently just a few sales ahead of Thom Yorke’s third solo album Anima at Number 30, so far only released on digital download.

MORE: The Official Top 40 biggest songs of the summer 1999

Finally, legendary Scottish punk band Skids open at Number 32 with acoustic album Peaceful Times, which features reinterpreted versions of songs from across the band’s back catalogue.