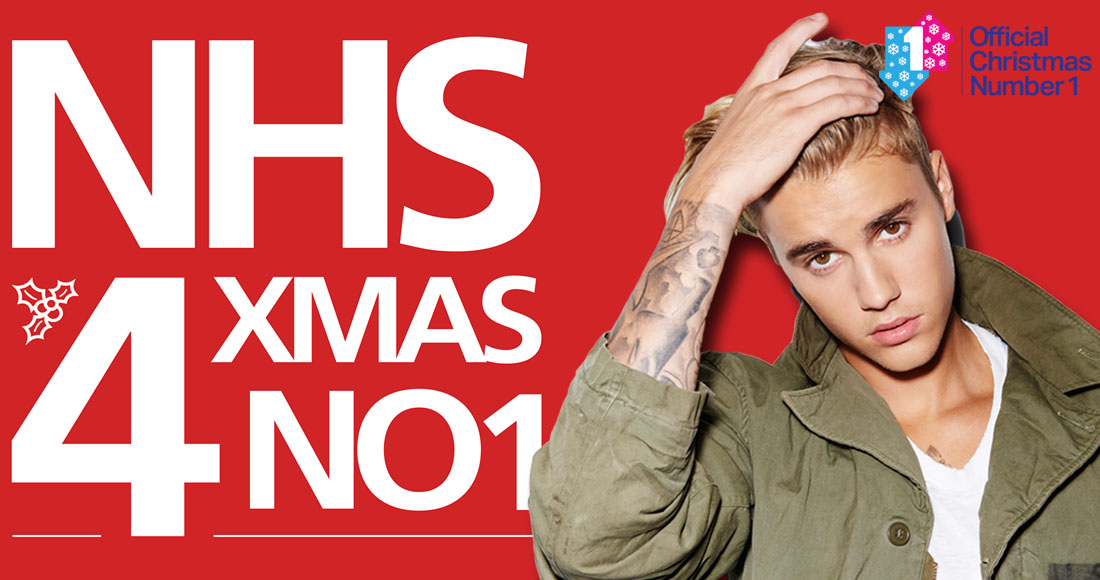 The battle for this year’s Christmas Number 1 looks to be a fierce contest between Justin Bieber and the NHS Choir; and things remain very close on today’s Official Chart Update.

After leading the race over the weekend, the Lewisham & Greenwich NHS Choir’s A Bridge Over You has been edged out by Justin Bieber’s Love Yourself, which takes a narrow lead of just 3,000 combined sales at the halfway stage of the chart week. But with the NHS Choir leading the way on downloads and Bieber amassing lots of streaming equivalent sales, the battle is far from over yet! Read more about the NHS Choir’s bid for Christmas Number 1 here.

Other festive chart contenders in today’s Update Top 40 are Louisa Johnson’s Forever Young at Number 6, and Stormzy’s Shut Up at Number 8. Three Christmas Number 1 contenders are currently outside the Top 40: Lethal Bizzle’s Going To The Gym at 70, John Williams’ Star Wars theme at 83 and Shakin’ Stevens’ Echoes Of Merry Christmas Everyone at 100. Check out the full list of this year’s contenders here.

Elsewhere, Justin Bieber’s Sorry is at Number 3 mid-week, One Direction’s History could be entering this week’s Top 10, climbing from 11 to 10 today, and Craig David’s When The Bassline Drops is on track to enter the Top 40 this week, currently at 34.

Finally,  six festive classics are currently inside the Top 40: Mariah Carey’s All I Want For Christmas Is You (13), The Pogues ft Kirsty MacColl’s Fairytale Of New York (14), Wham’s Last Christmas (22), Shakin’ Stevens’ Merry Christmas Everyone (29), Wizzard’s I Wish It Could Be Christmas Everyday (3) and Chris Rea’s Driving Home For Christmas (37).

The Official Christmas Singles Chart Top 40 will be counted down on BBC Radio 1’s Official Chart with Greg James between 10am - 1pm on Friday, December 25, and also announced on BBC One's Top of the Pops. The full Top 100 will be revealed on OfficialCharts.com at 5.45pm.