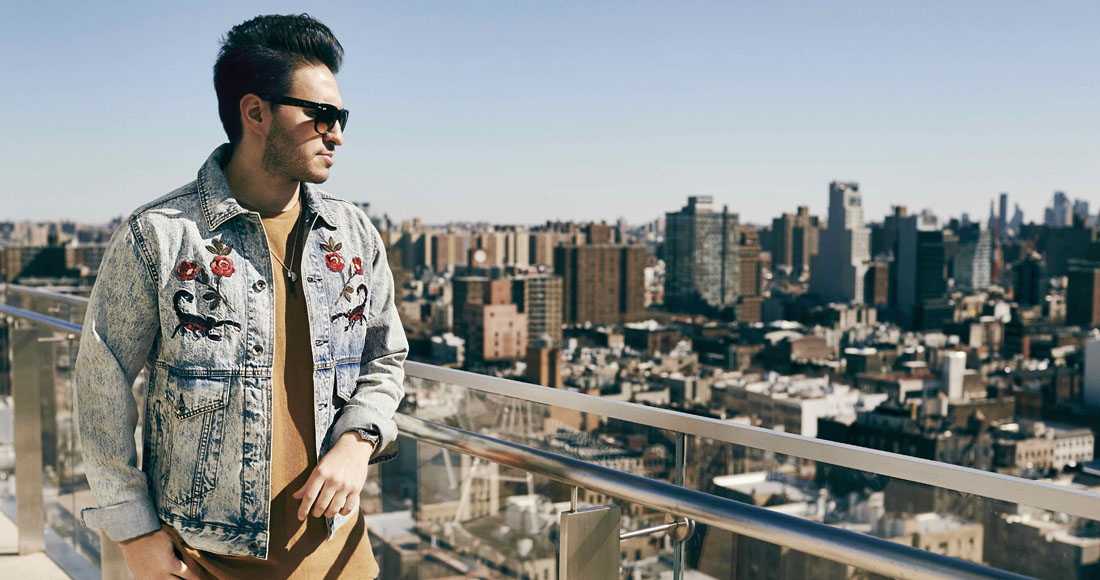 Jonas Blue is unpacking his suitcase at home when we phone him up for a chat.

The Essex-born DJ, producer and songwriter - real name Guy Robin - has just finished a three week tour, although looking at his schedule, which takes him across Europe this summer, it looks like it's only just begun.

"I'm unpacking and then repacking as I'm off to Ibiza tomorrow," he says, like it's no big deal, "but this is a rare moment of quite time at home - I'm enjoying it while it lasts".

Jonas scored his big breakthrough with his debut single, a cover of Tracy Chapman's Fast Car, in February 2016. But rather going the way of most anonymous producers, he's continued his winning streak, notching up another three hits with Perfect Strangers, By Your Side and most recently Mama.

Hello Jonas! So, things are going extremely well for you at the moment, aren't they? Your new single Mama now gives you a 4/4 hit rate, which is no mean feat these days.

“It’s crazy! I’m so happy. It still feels like absolute madness, but I’m so happy – I’m over the moon.”

We've seen a lot of dance acts come and go after just one hit...

“I think as a dance act, a lot of people put you down. Especially with Fast Car being the first song I had out. A lot of people thought, yeah, he’s going to be a one-hit wonder, so it’s nice to be four singles down the line and I’ve had the success I’ve managed to achieve.”

In terms of UK artists, you're probably one of the major breakout successes of the last year, but no-one really seems to have acknowledged that in a big way. Is that annoying?

“Kind of. I think it’s different when you’re a British act. I love that I’m British, but if you’re American and you have one semi-big hit, you’re suddenly on this path to superstardom and billed as a big deal. I’m now four singles down the line and we’ve managed to achieve some great success… it’s a building process, it is what it is. I’m not frustrated at all. It’s cool, it’s all part of the process.”

You also co-write your songs, with the exception of Fast Car, obviously.

"All my music is co-written by me. I was a producer first - that’s always been my thing - and the songwriting has come at a later stage.

How do you learn to be a songwriter?

"It’s mostly come from listening to untold amounts of Max Martin. I have a really bad addiction to any of his music, so that’s where my songwriting has come from. My label in the States, Capitol, have a really good relationship with him so we’re trying to make a meeting happen. He has collaborated with dance acts before like Zedd, so who knows. I’d love it to happen."

What lessons have you adopted from Max?

"It was something his mentor Denniz PoP said. He was a DJ in the late ‘80s early ‘90s and theory was that if people didn’t get into the record from the first ten seconds, there something wrong with it. Max took that theory into pop music. If you listen to my singles like Perfect Strangers or Mama, hopefully you should recognise it from the opening chords."

What's your favourite Max Martin song? Take your time, there's a lot to choose from...

"Probably… [pauses for 13 seconds] *NSync’s I Want You Back. What a classic."

Given you can write songs, why did you opt for a cover of Fast Car as your debut single?

“The crazy thing about that song is that it was never supposed to be a single! At the time I was releasing music under my real name, and Fast Car didn’t sound like anything I was making at the time - it was just something I’d always wanted to do. I played the song to a few DJs, and it wasn’t until it ended up in [record label] Virgin’s hands in the UK that things spiralled out of control.”

Your songs have high replay value, which is an important thing these days when more and more people consume their music on streaming services. Do you factor that in when writing and producing a single?

“I think it just stems back to my love of pop music. I like songs that people can listen to in their car, in a shopping centre… wherever. I love trying to make catchy songs. I guess that goes in tandem with the replay thing.”

There’s quite a bit of snobbery around the kind of music you make. People often write it off as something that's easy to make. It’s not that simple though, is it?

“Definitely. These songs are the hardest to make! To make a really simple sounding song that hasn’t been done before is actually really tricky - believe me. It’s hard when you’re making pop music, especially combining it with dance. It’s hard to get the credibility to do both. Calvin Harris is a great example of someone who’s managed it."

The release of Fast Car is the earliest piece of information we could find on you. How did you get into producing/DJ-ing/songwriting?

“When I was 11 I got into DJ-ing purely by watching Club 18-30 Reps on TV. Literally, that show was my life. The great thing about it was that it would pan to shots of DJs like Erick Morillo, Carl Cox and David Guetta. I was heavily addicted to those DJs and basically wanted to be them. I got my first piece of production software for free in a cereal box when I was 12, and it took off from there."

What cereal are we talking here?

Tell us something about you that the general public don't already know.

“I have the world’s worst OCD for packing a suitcase. People can’t believe have perfectly packed it is. Seriously, it’s a bit out of control."