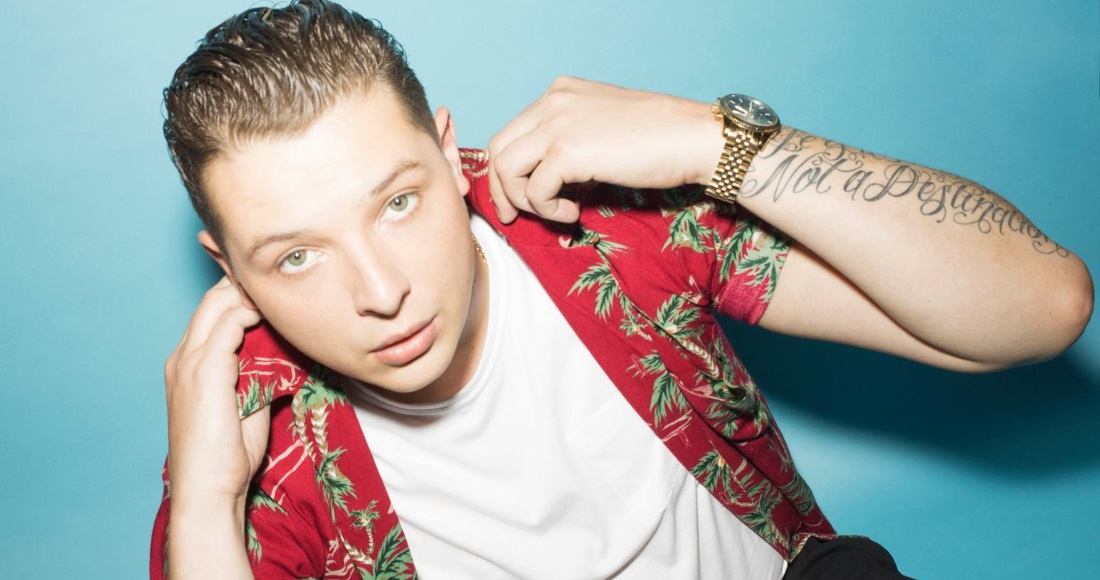 John Newman had just come out the other side of a "mini ego meltdown" when we called him up for a chat earlier this week.

Having recently gone public about the return of a brain tumour, the singer-songwriter is focusing on getting better and stepping things up musically, disappointed with the performance of last year's Revolve album.

He's teamed up with his old pal Calvin Harris for his latest offering Olé, a laid back summer jam that on multiple listens present itself as quite the earworm. We caught up with the star to find out if this new sound is the start of a very different John Newman...

Hello John! We're really sorry to hear you’re not 100% health-wise at the moment. How are you doing?

"I’m very good thanks. I’ve actually spent the last few days chilling because I had a bit of a mini ego meltdown…"

"I just needed to go home to my mum basically! I was like, 'I want to get better, I want to feel better, I want to do better.' When you’re such a perfectionist and you look at the charts… it just hits you that you want to do better than this. I want tracks that do well worldwide. Olé is a very different record for me and it’s had a very slow build, which can be painful for me because you’re like, 'come on already!'."

You’re right - Olé is a very different sort of song for you to release, and the way songs impact the chart now is very different, so there’s no need to start stressing out yet, is there?

"The song is very different, and the charts are very different… it’s going to be a really long release I think. It's weird because people like Bieber go straight in at Number 1 but their impact dates aren’t for another ten weeks, meaning you get ten weeks of f**king Bieber."

‘Impact dates’ for singles are a bit of a strange concept at the moment, aren’t they? When is Olé meant to ‘impact’?

"Not for another month yet. I think we’ve got to be careful with this song and introduce it slowly, because it’s not necessarily as instant as some of my other stuff. It doesn’t mean I’m going to make ten songs like Olé – that wouldn’t be a very good album, would it? – but I’m trying something different and aiming for a bit of longevity. Olé is the sort of song that might pass you by the first couple of times you hear it, but I hope it’s one of those songs people can still play and not be bored of years down the line.”

And if people want your usual balls-to-the-wall John Newman sound, they’ve got your recent Sigala/Nile Rodgers single Give Me Your Love. How on earth does a collaboration like that come about?

"Yep, it's an absolute car crash, isn’t it?! When I was asked about doing that song I loved the idea but was like, ‘erm, really?!’ Working with Nile was incredible – we wrote a few songs to get ‘the one’ and we felt like we’d done it with that song. I hope the future holds a lot more of me and Nile. Honestly, we got on so well it feels like we’re related to each other. He gets about four hours sleep a night and he doesn’t let illness get in his way. We both just want to work, work, work."

We heard you and Calvin came up with Olé really quickly; what's the story there?

“We really did. Calvin suggested that I try going for a completely different sound, something that will make people sit up and take notice. We started working on a song that was a proper old school Calvin Harris-style dance track, but it just wasn’t working. Then we tried a more modern MJ-style song with a touch of Calvin, but it just didn’t have enough ‘song’ for me behind it. Then he started playing something on his guitar and I didn’t like that either - I thought he’d been drinking again – but when I went back in the studio with him the next day he’d done whole topline for Olé and he told me, ‘you’re doing this, because it’s different, it’s a good vibe and it suits you’."

What’s it like to have Calvin Harris as a mate? We imagine he’s quite loyal?

"He is. I think we’ll be friends for a long time because we’re just so honest with each other, which is really important to me. I spoke to him about my mini ego meltdown the other day. It’s hard – when you tell someone that you’re contemplating taking a break and re-assessing my career, most people will just say, ‘No John you’re doing amazing, I always see you in the papers!’. Calvin actually listened, took it on board and offered to help get me back on my feet."

Your last album Revolve was a good album, but it didn't seem to get the kind of recognition that your debut album Tribute got. Did you feel that?

"I wasn’t happy with its performance. I mean, I’ve got plaques on my wall from it, but that was me ringing up and asking for them – no-one's throwing them at me for the album’s success! What’s most important to me is making something you’re proud of, and I’m really proud of that album, even if people didn’t respond to it as well as Tribute. It’s like car designers, they all have to make a bad car before they make their best one. Hopefully it means the come back off Revolve will be stronger than ever before."

Any idea yet when we can expect the album?

“I want to just test the waters at the moment. I don’t want to make music that’s just flopping left, right and centre. I don’t want another Revolve – it was a bit of a mental breakdown for me. People just kept telling me to put on a brave face in interviews and don’t talk about its success. I held that together for only so long before I had to be honest about it. I going to put out a few singles and work my way up to an album at some point. It’s going to come, but if the singles totally flop and I’m not reacting as an artist anymore, then I know when to quit and try something else, like make music for other people or start a band or something. I know when the time will be right."