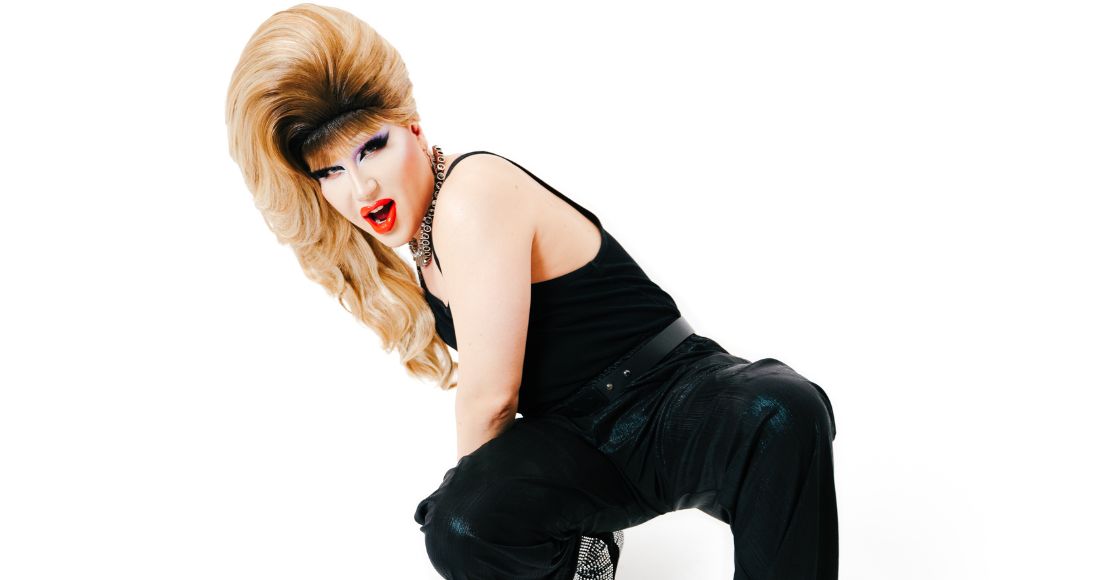 Jodie Harsh has been working for a long time - from her roots on the queer club scenes, to her rise as a DJ and producer in her own right, she's become one of the most iconic (and recogniseable) queer musicians in the UK right now.

"I've always been in the dance music world," she tells us over the phone. "Of course I do drag and the way I present myself for shows is in make-up and a wig, but I feel like I've always had a specific sound."

Nowhere is sound more accessible than on Jodie's latest release under Warners, Shock. Much like label mates LF SYSTEM and Joel Corry, Jodie's music is set in both the past and the present - Shock itself is a thumping neo-disco-house banger, which feels like it could have been as popular in 1992 as well as 2022.

"My label has never asked me to go and make some party anthem," Jodie continues. "But I'm always going to be influenced by disco and house, and my songs will always have a little bit of attitude. Everything will have a bit of bite."

You could also say quite...harsh? (Sorry).

Hi Jodie! Congratulations on the release of Shock. Can you describe to us how the song first came about?

I have so many songs on the go at any one given time, but Shock actually came out quite quickly. I'd had the idea in my notes app for ages - of a song based around electricity, having a shock.

I was in a session with this amazing songwriter called Clementine Douglas and we found a beat that worked with the idea. It just took me a while for me to finish the production. I'd been on tour with Jessie [Ware] at the end of last year, so I kind of finished the song on the road, in my hotel room.

Is it Clementine's voice we can hear on the song? Because, not gonna lie, at first we thought it was Keisha from Sugababes.

It is! But I would love to do a record for the Sugababes. I'll have to look into that. I'll dig a number out for Keisha.

It sounds like you're a bit of perfectionist when it comes to the production of a song, all the finished parts?

Yes, I'm very much a perfectionist! Often, when I hear my stuff on the radio, I'll start wishing I did things a little differently [on the production]. But now that [Shock] is out, I don't think I'd actually change anything about it. Which is a good sign!

MORE: Jodie reveals she's been in the studio for solo sessions with Little Mix's Jade Thrilwall

Right now, it seems to be a really exciting time for dance music on the Official Charts - LF SYSTEM's Afraid To Feel has just hit Number 1, the first dance track to do so in 12 months.

You know, I actually share the same team, A&R and label with LF SYSTEM it's so amazing. People are dancing out in real life again! It's exciting. I mean, the LF SYSTEM song is literally a disco song, Beyoncé has just dropped a house record, so has Drake. Those are two of the biggest acts in the world. The focus is absolutely back on the dance floor now, as it should be!

Speaking of disco and house, the new Jessie Ware single sounds very much inspired by that, and we know you were just on tour with her. You would work so well together!

I actually got a sneak preview of that in her dressing room on the last day of the tour.  It sounds like it would have played at the Hacienda in Manchester.

[Working with Jessie] has been mentioned, but we have to try and get in the studio together at some point. Ideas are floating around for sure, but Jessie is crazy busy. I do have some ideas for her though. And I've been in the studio with some very exciting people!

I've been working with Gracey recently, who's amazing. We've got some great songs. And do you know [alt-pop singer and drummer] Georgia?

We have something that is 100% going to come out at some point next year, or whenever. We've written this song and it's a euphoric banger. It's so major. I feel like has to be one of my singles. It has to be.

Before then, can we get Sugababes, Jessie Ware and you on a re-make of Lady Marmalade?

I love that idea! Look at you!

We'll take a 10% cut of all profits. Thank you for speaking to us Jodie!

Shock is out now via Warner.