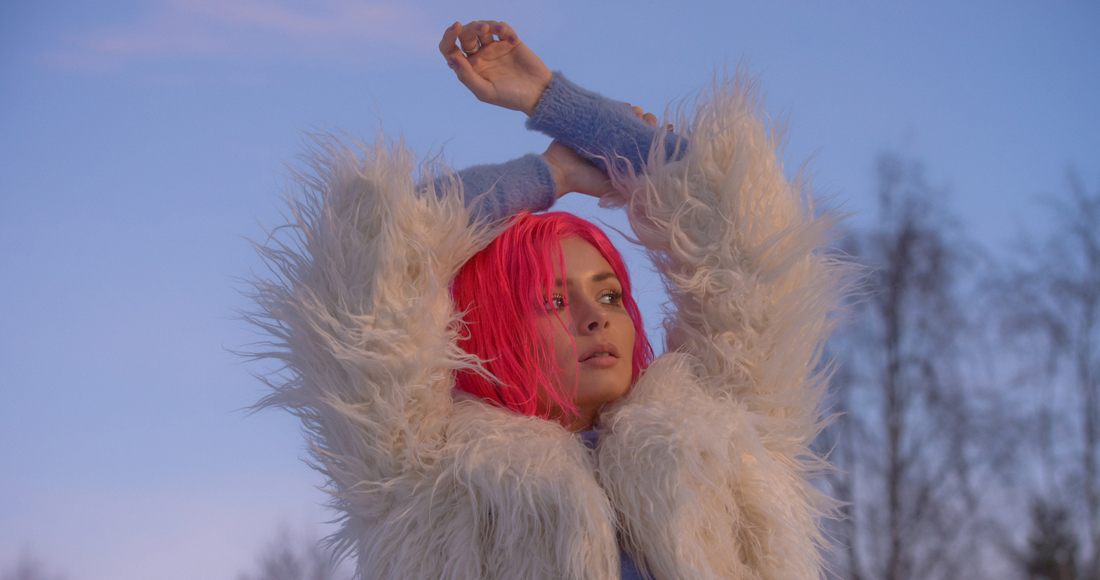 Nina Nesbitt is attempting to pull off a feat not afforded to many popstars: making a second first impression. Back in 2014, when she was signed to Island Records, she was presented as a folk pop singer, a successor to artists like Pixie Lott and Natasha Bedingfield. Her single Selfies was a zeitgeist-y take on teenage heartbreak but it failed to do the business in the charts, while her debut album Peroxide reached Number 11.

Speaking to her over the phone, the Scottish musician describes the two years after the release of Peroxide as “horrendous”, with little communication from the label and making an album that was ultimately shelved before being dropped altogether. Chalking the whole thing up as a less than pleasant experience, she retreated behind the scenes and worked as a songwriter, landing cuts on albums for Jessie Ware and The Shires.

However, it didn’t take long for her to get picked up by another label. Indie outfit Cooking Vinyl – home to the The Prodigy, TLC and Richard Ashcroft – approached her about releasing an album a month after she was dropped from Island. Nesbitt initially turned down the offer (“I wasn’t in a good place to throw myself back into all that”) but nine months later, it turned out she had “accidentally” written an album - and the label loved it.

The record, called The Sun Will Come Up, the Seasons Will Change, is, unsurprisingly, a very different proposition to its predecessor. Mixing moody, lo-fi R&B songs (The Moments I'm Missing) made in her bedroom with glossy pop bangers (Colder, Loyal To Me), Nesbitt's new collection encapsulates her tumultuous early twenties - from shifting friendship dynamics to being self-employed.

You've effectively pushed restart on Nina Nesbitt the Popstar. How challenging have the last two years been?

“I know, it’s been the hardest thing ever. I think this industry often only gives you one shot and it’s extremely hard to do that again. To be honest, I didn’t actually think I was going to release another album. I started songwriting for other artists and I absolutely loved doing that, and then somehow accidentally wrote this album in my spare time and though writing for others. It was sort of like therapy for me back home. I’ve been very lucky to be given the opportunity.

“Cooking Vinyl are really passionate, really easy going. They let me have full creative control and I think I’ve always been really lucky to have a fanbase online who’ve been there for me. I’m also incredibly lucky that the industry has changed so much - the DIY approach to music very much suits me.”

It’s a world away from how popstars work at major labels. How difficult did things get after the release of Peroxide?

“It was horrendous. I was basically shelved for two years and I actually made an album that never really came out. I didn’t know that I was shelved, so I thought we were putting an album out. I actually got dropped the day before [2016 single] Chewing Gum was supposed to come out. I had no idea, and they were like, ‘Oh we’ll still put the single out’ and I was like, ‘Well, can I just leave?’

“It was a weird situation but I’m totally cool with them all now. To be honest, it wasn’t my A&R that was the issue, it was a tricky situation and I don’t think it was the right fit for either of us. It pushed me to go off and learn production myself and take control of things a bit more, which turned out to be the best thing that could have happened - but at the time it really didn’t feel like it.”

Being dropped must be a huge knock on your confidence…

“I didn’t actually even get told, it was my manager who told me, so yes it wasn’t ideal. My confidence was already knocked because I had been writing all this music and everyone had been like and I thought, ‘well nothing is obviously good enough to come out’ and actually that wasn’t the case – it just wasn’t going to happen. It took me a long time to build up my confidence but I think writing for other people really helped with that.

You must be pretty chuffed with this new album then?

“I’m so pleased with it, I honestly still like every track on it which is rare for me! Something that I set out to do was to be proud of the album and really love it. I feel like it represents me as an artist. I can’t wait for it to come out and people to delve a bit deeper into my music and hopefully relate it to their lives as they want to.”

It’s basically an account of someone in their early twenties, which for some is a particularly crazy time. How would you sum up your twenties so far?

“It was written between when I was 21 and 23 so for me that was a particularly weird time: memory loss, going out partying five times a week, having no idea what I want to do, getting really distracted, and being single and dating people that I was probably a bit of a dick to. And then coming out of that like, ‘What are you doing with your life? Sort it out!’ This album kind of helped me sort it out. I was quite depressed after the whole label drama and I felt a bit useless, so it helped me get through that and discover who I am."

It feels like there are a lot of stories behind the songs on the record. Are there any that particularly stand out to you?

“There are songs about friendship on there - your friendships change a lot in your twenties, especially as girls. One is about one of my best friends Chloe falling pregnant when we were like 22 and my feelings towards that. I realised then that our adolescence was fading and we were entering into early adulthood but all at different times, and that was quite a weird thing to get my head around. I think as women as well, going down different paths and starting to question if you’re going down the right one. That was the one that really made me ask a lot of questions.

There’s a song on the album called Empire, which I wrote intending for a football match - to put behind the football highlights or something! And then it turned into this personal song about failing at something that you love and then coming back from that. I don’t want it to come across as cocky or anything – it’s more like a motivational song for anyone that’s got something that they want to achieve.” 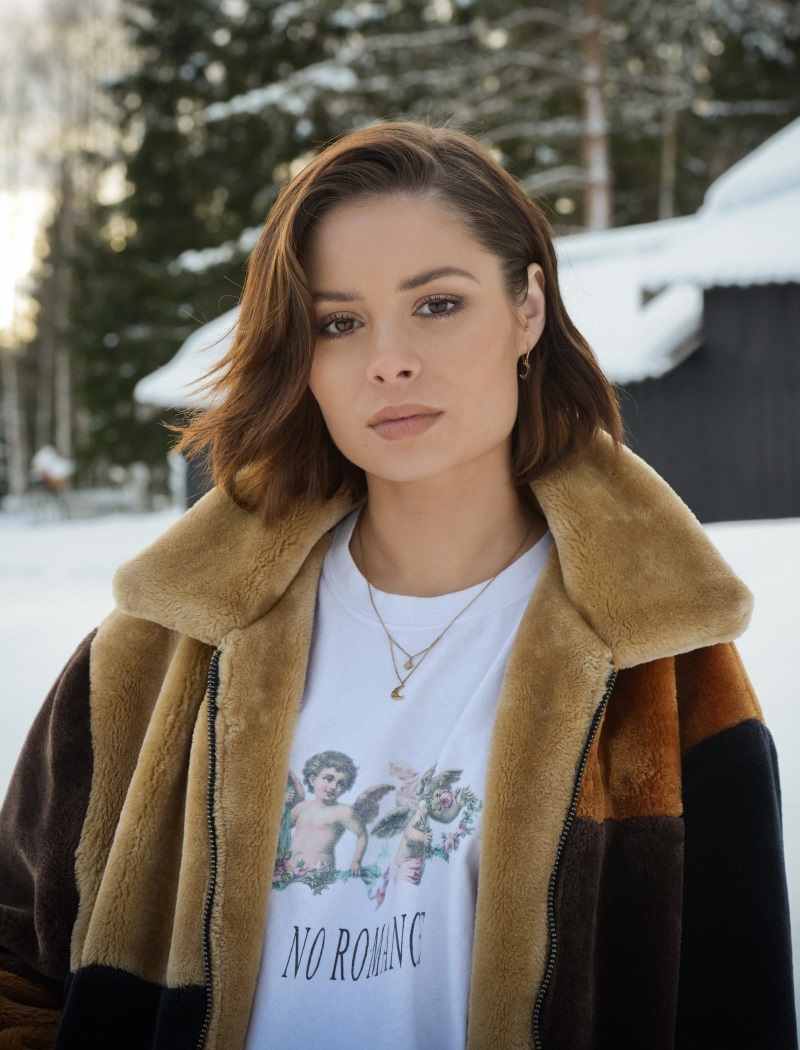 “Fraser didn’t come on until last summer and we were already in the swing of it by that point, but we really needed help on Loyal To Me, because I was just about to put the song in the bin because I couldn’t find the right production! I thought that he would absolutely nail it and I was really happy with what he did, and then we wrote a song together after that with Jin Jin, who’s written a lot of Jess Glynne hits, and that came about literally the week before I handed the album in. He’s been around for so many years and he’s so talented. It was really nice having someone that has been doing it for so long who’s had so much success - I learnt a lot from him.

“I wrote and produced a lot of it in my room sat on my bed, and I worked with Lostboy and Jordan Riley, who are about my age, which was a help. I like that it was a low-key affair and now they’re smashing it as producers as well.”

The album doesn’t feel too “meddled with” either, which is something pop albums can easily fall victim to.

“Some of it definitely sounds lo-fi and bedroom-produced at the beginning. I kind of like that! To be honest, when I started the album it was in the vein of The Sun Will Come Up, Chloe and The Moments I’m Missing. It wasn’t that ‘radio-pop’ and I thought, this might be a bit boring because I feel like half of me loves that music and the other half of me loves a pop banger, so I wanted to have a nice mix on there.”

Some say you can never have enough pop bangers.

Nina Nebitt's new album The Sun Will Come Up, the Seasons Will Change is out on February 1.