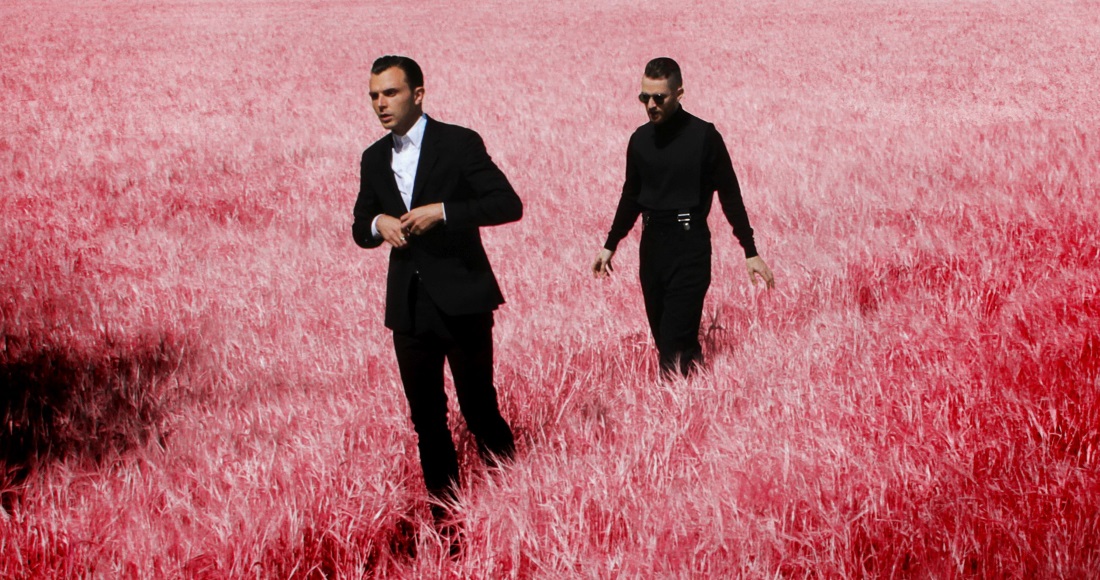 A few weeks ago, we gathered with a few other journalists and record label types in a tiny but very fancy bar in west London to listen to Hurts’ new album Surrender.

You may or may not know this is the Manchester duo’s third studio album; their previous two records Happiness (2010) and Exile (2013) both landed inside the Official Albums Chart Top 10 (Click here to see their full Official Chart history).

So how does Surrender sound? In short, it's very good; and below are five reasons why...

1. It's short but perfectly formed.

The standard 10 track version clocks in at just under 35 mins, and its brevity is intentional. "The perfect pop song is three-and-half minutes long," one half of the band Adam Anderson told us after the playback, "so we set ourselves a target to make each song that length. I think by the end we'd perfected it." But before you even begin to think Surrender was a rushed job, Adam insisted: "Even though we found a formula of sorts, the album still took us a long time to put together. In fact it felt like it took us ages. Creating what we considered to be perfect pop songs takes time."

Between the orchestral blast and sweeping strings on Rolling Stone and Theo's especially powerful vocal on tracks Slow and Wings, Surrender in many ways sticks to what Hurts know best. In fact, we noted that Wings reminded us a bit of Beyonce’s Halo. "It's funny you mention that," Adam said to us when we drew it to his attention, "because we actually used less sounds and layers on the songs than we have before, but kept the big sound. We realised it sounded more effortless that way.” That’s us told then.

As you may or may not have noticed from the album’s singles Some Kind Of Heaven and Lights, Surrender is a much poppier affair than Exile. In fact, the ratio of ballads to mid/uptempos is exactly 50/50 on the standard version. One of the more radio friendly songs on the album is called Why; a track packed with catchy ‘oohs’ and ‘aahs’ as well as an earworm of a chorus we noted could be a Girls Aloud single, if Girls Aloud were still releasing singles in 2015. Similarly, Kaleidoscope is a shimmering slice of disco pop about getting lost in the moment that may surprise Hurts fans.

4. Our favourite song is…

Remember Better Than Love from Hurts’ debut album Happiness? Well, the duo have delved back into similar dance territory on Surrender, and the results are pretty spectacular. As well as Kaleidoscope mentioned above, Nothing Will Be Bigger Than Us was our immediate favourite at the playback. It’s a grand, strobing disco stomper with a thumping chorus on which Theo chants: “Nothing will be bigger than us when we’re standing side by side”. The result sounds more like a remix of a Hurts song than an actual Hurts song.

Like their previous efforts, Surrender is largely about the intense, extreme emotions that come with love and relationships. “When I’m out of love, I turn and run, but only you can make it better,” Theo sings defiantly on Nothing Will Be Bigger Than Us, while on twinkly closing number Wish he begs: "I wish that I could re-write all the things we both let go.” Surrender is rarely a subtle affair, but then it wouldn’t be Hurts without a bit of drama, would it?