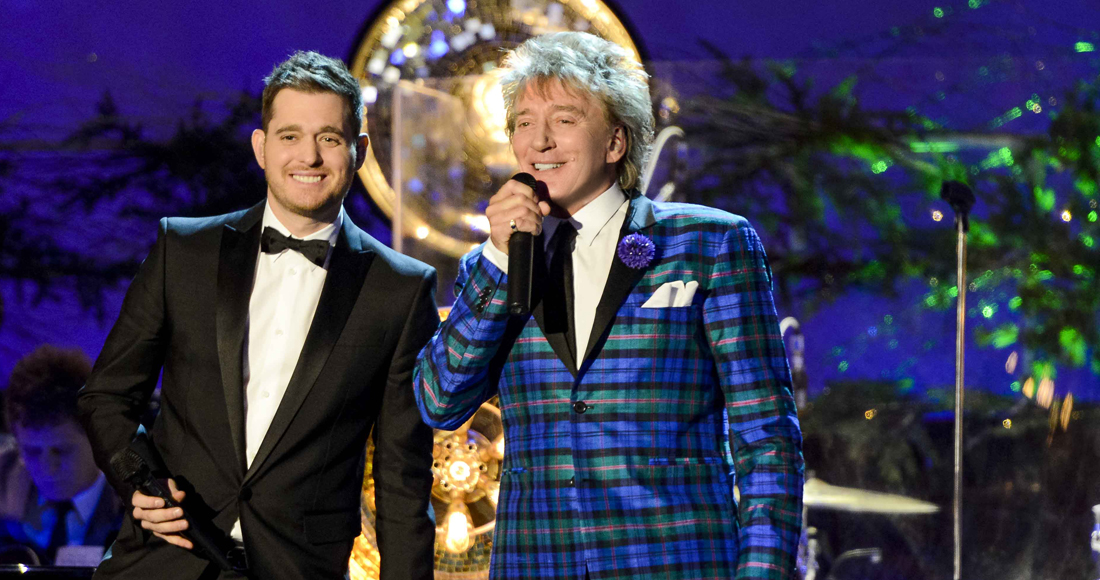 They are the songs we have on repeat as soon as the tree is up – those classics that are as much a part of the Christmas tradition as roast turkey, crackers, sprouts, and asking if the person giving you your gift has kept the receipt.

While we've heard these songs everywhere for decades, it's only since the introduction of downloads and streaming that these Christmas standards have enjoyed any kind of chart presence since their original releases. And in some cases, they were never singles at all, so are enjoying their first taste of chart success.

We looked back into the archives to see how the standards have fared in the Charts over the years – while you may have your favourite renditions, some of the most successful versions might not be the one you're expecting.

Much covered (by the likes of Celine Dion, Michael Buble and Kelly Clarkson), but only the King could take it into the chart. Blue Christmas peaked at Number 11 for Elvis Presley in 1964.

Rockin' Around the Christmas Tree

Brenda Lee's original was a Number 6 hit waaaaaay back in 1962, and finally returned to the Top 40 in 2016, thanks to streaming, and reached Number 9 the following year. Brenda's version, however, was lapped in 1987 when comedian Mel Smith and singer Kim Wilde teamed up for a novelty version in aid of Comic Relief, peaking at Number 3. 2020 is seeing Justin Bieber enjoy chart success with the song, landing in this week's Top 40 at 21.

Dear Uncle Bing’s wish for a little bit of snow on Christmas Day is one of the most famous songs in the world, yet was never a Number 1.

It’s the oldest million-seller too – having been in circulation since 1942. It had to wait 35 whole years before it got a shot at the charts, though, reaching Number 5 in 1977. A new version of the track with the London Symphony Orchestra has been released in 2019 as part of new Bing At Christmas album.

You hear this one everywhere you go, right? Bobby Helms version from 1957 is perhaps the most famous, but reached only Number 30 – and not until 2019. Jingle Bell Rock has actually hit the Top 40 twice: old-school crooner and entertainer Max Bygraves took it to Number 7 in 1959. Chubby Checker and Bobby Rydell's cover reached Number 40 in 1962. Speaking of jingling bells…

One of the jolliest Christmas songs – and most parodied, with its "Batman smells" remix – Jingle Bells has made the Top 40 twice but… not in the versions you would expect. First up was strange, dangly-goolied animated being Crazy Frog who released Jingle Bells as a double A-side with – what else? – MC Hammer's U Can't Touch This, and went to Number 5 in 2005. As if that weren't odd enough, Basshunter added to the Jingle Bells canon, releasing a dance banger version that got to Number 35 in 2008.

You would think a song so blatantly titled would be a shoo-in for Christmas Number 1 every year, but Nat King Cole's version – known better perhaps as "chestnuts roasting on an open fire" – has never hit the Top 40, peaking at Number 51. It was, however, a hit for Alexander O'Neal in 1988, reaching Number 30.

Happy Xmas (War Is Over)

Beatle John Lennon’s Happy Xmas (War is Over) isn’t the cheeriest track in the world, we’ve got to admit, but being a bit reflective is what Christmas is all about, isn’t it?

Happy Xmas (War Is Over) has been a Top 10 hit three times – twice for John & Yoko in 1972 and 1980 and then for the finalists of Pop Idol in 2003. The 1980 rerelease following the death of John Lennon is the one to hit the highest – peaking at Number 2 behind St Winifred’s School Choir with There’s No One Quite Like Grandma. Oh yes.

A standard of many a dull Nativity play, yes, but it’s also been a Top 10 hit twice!

Bing Crosby pops up here again, taking the track to Number 8 in the very first Christmas Number 1 race in 1952. Al Martino may have won that year with Here In My Heart, but you never hear that at a Christmas party, do you?

Thirty-six years later, Bros fared better with their emotive reinterpretation, hitting Number 2 in 1988. Sadly they did not sing it at their two comeback concerts in 2017.

The jaunty, optimistic Winter Wonderland has been around since 1934 and covered by big names like Leona Lewis, Aretha Franklin, Eurythmics, Diana Ross and Michael Bublé. But it's hit the Top 40 only one, and for none of those acts.

Johnny Mathis took it walking in a winter Top 20, reaching Number 17 in 1958, changing quite a few (too many) lyrics along the way. Johnny did eventually have an Official Christmas Number 1 in 1976, with When A Child Is Born. Here's its probably most niche cover by Scottish dream-pop band The Cocteau Twins, whose interpretation of the classic hit Number 58 in 1993.

MORE: Search for your favourite Christmas song to see its entire chart history in our archive

Santa Claus Is Coming To Town

You know the Jackson 5 version, which charted for the first time in 2018, hitting Number 30, and you may be a fan of renditions by Bing Crosby (hello again Bing!), Frank Sinatra, the Beach Boys, and perhaps even Dannii Minogue and Ronan Keating. But Santa Claus Is Coming To Town has charted just two other times.

The Carpenters had a modest hit, reaching Number 37 in 1975. Its other appearance is thanks to none other than Bruce Springsteen. Yep, the Boss reached Number 9 in 1985 with a double-A side of My Hometown.

Have Yourself a Merry Little Christmas

Shockingly, this emotional ditty has never graced the Top 40. Closest was Rod Stewart's rendition, which peaked at 51 in 2012.

If Mariah is the queen of Christmas (she is) then surely Michael Bublé is the king? His Christmas album is one of the biggest albums of the century and he managed to do what Perry Como never could – take It's Beginning to Look a Lot Like Christmas into the Top 40. Seven years after its release, Bublé's baubled-up cover went Top 10, hitting Number 7. Perry Como's version - released in 1951 managed Number 47 in 2007.

A saucy Christmas classic that’s been trilled by all the greats – Eartha Kitt, Mariah, Madonna, Kylie, Ariana, and most recently Gwen Stefani. For years it never made the Top 40, gaining a couple of near-misses for Eartha (stalling at Number 58) and Kylie, until…

This festive favourite is so beloved, it's been the Official Christmas Number 1 twice! Harry Belafonte's version won the race in 1957, and Boney M's discotastic cover claimed the top of the tree in 1978. Both versions are million-sellers.

This rousing number has been covered by just about everyone who ever held a microphone, but reached the Top 40 just once.

And who made it? Susan Boyle? Celine Dion? Kelly Clarkson? Whitney Houston? Well, no. None of those. The only act to have a hit with it were… Ladywell Primary School (!) reaching Number 39 in 2012.

I Wish It Could Be Christmas Every Day

Originally released in 1973, this Christmas staple never made it higher than Number 4. The Official Christmas Number 1 that year was Slade’s Yuletide classic Merry Xmas Everybody, leaving Roy Wood and the backing vocalists from Stockland Green School in the cold.

The Power Of Love

This one isn't technically a Christmas song, but its notable since both versions of the song - the original by Frankie Goes To Hollywood and Gabrielle Aplin's moody cover - both hit Number 1 on the Official Charts, although neither claimed Christmas Number 1s (it's also notable that Frankie Goes To Hollywood's original version has a video that recreates the Nativity scene, if you weren't already sure this was a modern Christmas standard).

Gabrielle's cover as well was the first track used in the John Lewis Christmas advert to top the charts, following soon would be the likes of Lily Allen. So, here it is in all its angsty glory, in honour of a new British Christmas tradition.

Relive every song that did make it to Christmas Number 1 in our gallery of festive chart-toppers past: