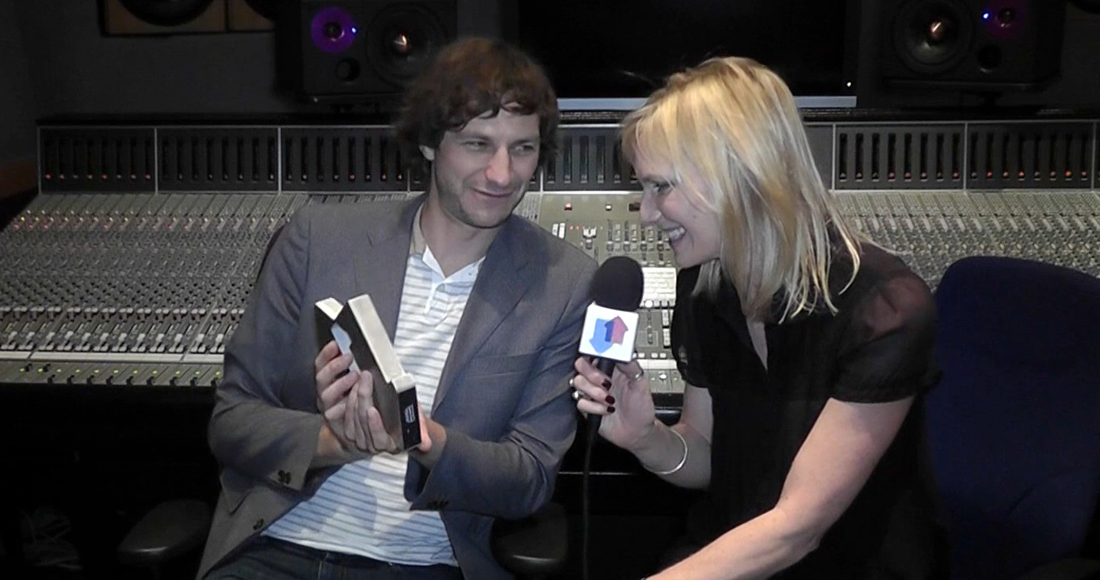 Gotye FT Kimbra’s Somebody That I Used To Know, the track that has boldly climbed and climbed throughout the Official Singles Chart in 2012, today achieves its highest reward, as it topples global DJ/producer David Guetta, to become the UK’s Official Number 1 single.

Though Guetta led the singles race midweek, the lead narrowed each day to a final score that sees Gotye pipping Guetta FT Sia’s Titanium by 2,000 copies. The quirky ode to lost love by Australian-Belgian singer/songwriter Gotye, bags its highest placing ever in its sixth week on the chart, helping Gotye to his first UK Number 1 single and becoming the seventh recipient of an Official Singles Chart Number 1 Award – a new award created by the Official Charts Company to mark the 60th anniversary of the Official Singles Chart. The brushed aluminium award will be presented to every new Official Number1 single from now on, Somebody That I Used To Know has also clocked up an astonishing 64 million YouTube views to date. The album, Making Mirrors, from which the single is taken, is released in the UK tomorrow.

Beatles v Stones: Macca and Mick’s return to the Top 5

Jagger is a featured artist on T.H.E. (The Hardest Ever), the new Will.I.Am single (3), which also features Jennifer Lopez as a guest – and lands today at Number 3 on the Official Singles Chart, 27 years after Jagger’s last Top 10 hit – his Dancing In The Street duet with David Bowie, which held the Number 1 spot for four weeks in September 1985.

Jagger says he is delighted with the success, telling theofficialcharts.com, "We had a great time recording the track and I’m glad that UK music lovers are liking it!”

Jagger is certainly a legend of the Official Charts, chalking up eight Number 1 singles and 11 Number 1 albums as frontman of the Rolling Stones, and 12 further Top 10 singles and 25 further Top 10 albums. As a solo artist, Dancing In The Street is his only Top 10 single, with his 1985 album She’s The Boss being his only Top 10 album. He was also of course immortalised last year inMaroon 5’smash hit,Moves Like Jagger, which despite never reaching the Number 1 spot, became the second biggest selling single of 2011, selling over 1.04 million copies.

T.H.E. (The Hardest Ever) is the lead single from the former Black Eyed Peas main man’s upcoming fourth studio album, #willpower, which is scheduled for release on April 30. The Rolling Stones’ full chart history can be viewed here.

Mick and Macca’s first Top 5 singles and albums battle since 1966!

It’s a battle of the ex-Beatles and Rolling Stones legends this week as today marks the first time in over 45 years that Mick Jagger has been on a Top 5 single, while Paul McCartney has scored a Top 5 album simultaneously.  Jagger takes position at Number 3 on the Official Singles Chart today and Paul McCartney also hits Number 3 with new album Kisses On The Bottom.

The last time this occurred was back in October 1966 when The Rolling Stones reached Number 5 on the singles chart with Have You Seen Your Mother Baby, Standing In The Shadow, and The Beatles were at #2 on the albums chart with Revolver.

Queen of Pop Madonna today enters the Official Singles Chart at Number 37 with the single Give Me All Your Luvin’ FT Nicki Minaj and M.I.A.  The track makes its full debut appearance today on the back of five days’ sales as an official single after having previously been offered as a pre-order incentive for her forthcoming album, MDNA. The Superbowl starlet has climbed 27 places since midweek.