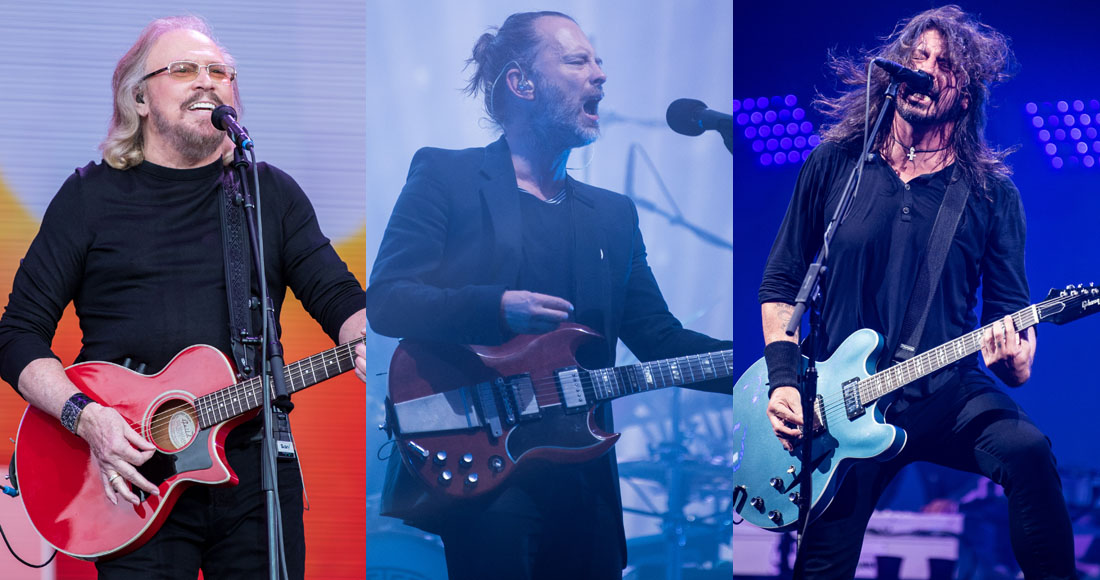 A number of acts who performed at this year's Glastonbury Festival are seeing their music impact this week's Official Albums Chart.

Radiohead, who headlined the Pyramid Stage on Friday night, are currently leading at Number 1 with a 20th anniversary reissue of their OK Computer album on today's Official Chart Update.

The record was the band's first Number 1 album, logging two weeks at the top in June 1997. The anniversary release includes three previously unreleased songs called I Promise, Man Of War and Lift.

Radiohead's latest album A Moon Shaped Pool could also find itself back in the Top 40 this Friday, currently a midweek re-entry at 39 following a sales boost of 204% so far compared to the same period last week and their 1995 release The Bends enjoys a 353% uplift sending it back towards the Top 75 post-Glastonbury (60).

What an incredible weekend! Here's a few of our favourite bits from #Glastonbury2017 💖 🎵 🎪 pic.twitter.com/OVQvodIzYX

Meanwhile, Saturday headliners Foo Fighters are set to leap back into the Top 10 with their Greatest Hits album, a surge of 285% sees Dave Grohl and co rocket 38 places to Number 7, while Royal Blood's self-titled debut album charges 26 places to 15. The reigning rock duo, who took to the festival stage just as they found out their new album How Did We Get So Dark had landed at Number 1; Royal Blood today slip from 1 to 4.

Other Glasto performers set to impact this week's albums chart are The Bee Gees, their new greatest hits album Timeless lands at 25 after Barry Gibb's 'legend' slot, The xx's latest record I See You vaults back into the Top 40 at 29, and Stormzy's Gang Signs & Prayer jumps six spots to 40.

US rock band Imagine Dragons are currently at Number 2 with their third album Evolve, and a reissue of Prince & The Revolution's Purple Rain with previously unreleased songs is at 5. The album topped out at Number 7 during its original 1984 release and peaked at 4 for a 1995 re-release.

Elsewhere, DJ Khaled is all but certain to claim his first UK Top 40 album this week - his tenth collection Grateful is at 9, while blues guitarist Joe Bonamassa opens at 18 with Live At Carnegie Hall, and Steps' comeback album Tears On The Dancefloor rebounds 32 places to 32 following the release of its latest single Story Of A Heart.