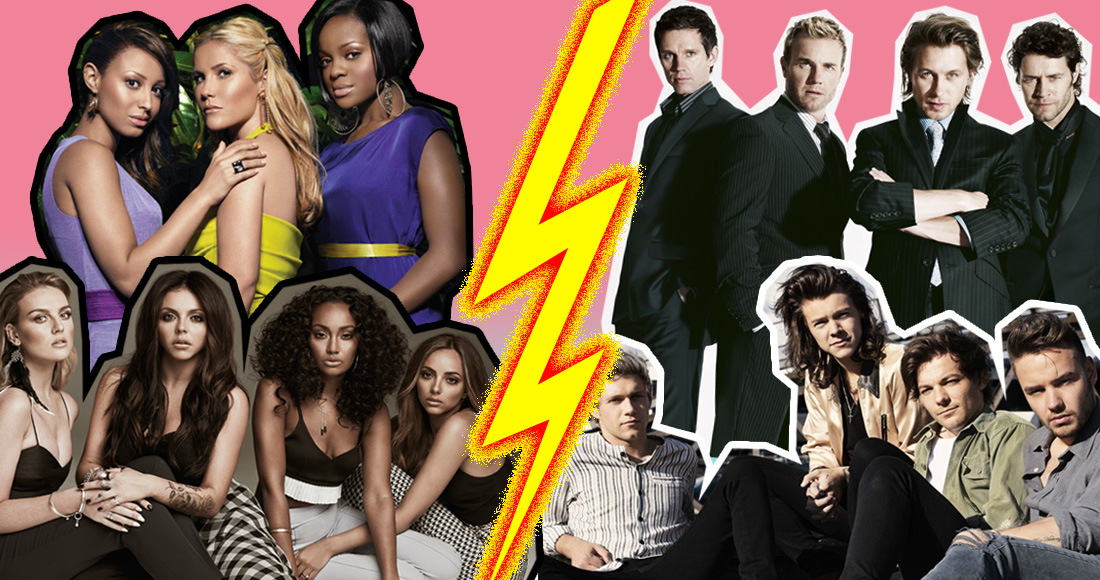 It's the age-old question, who's the best? Some of us are fiercely loyal to the lads, or loved up for the ladies only, while a few of us are more than happy to indulge in a bit of both – who needs labels?

While it's just a question of taste, you can't argue with stats – and we've got the sales to show just who comes out in front. We're counting down the biggest girlband and boyband of the 21st century so far…

Would it be too old-fashioned of us to go ladies first? Let's do it anyway.

There have been some stellar girl groups over the last 16 years, but so far this century, only one has managed a million-seller and, believe it or not, it's Atomic Kitten! Their big breakthrough hit, which changed their lives overnight, was Whole Again, often imitated, never bettered. The heart-wrenching mid-tempo spent a month at Number 1 in 2001 and has clocked up 1.01 million sales.

Up in second is a smash from 2000 – girlbands really were at the peak of their powers in the early Noughties – with the recently reformed All Saints. Shaz, Nat, Nic and Mel's dreamy Pure Shores had William Orbit on production duties and it was another of his songs that knocked All Saints off after two weeks – Madonna's, er, spirited cover of American Pie, no less. 815,000 of you own this one.

Bronze goes to one of the biggest girlbands of the century so far – yep, it's the Aloud. Fresh from winning Popstars: The Rivals, Girls Aloud unleashed their debut single Sound of the Underground in December 2002 and a pop colossus was born. Over 671,000 copies have been sold, and the song topped the charts for four weeks, bagging that year's Official Christmas Number 1. It would be the first of a whopping 21 Top 10s for Girls Aloud.

Our highest international act is Pussycat Dolls, who claim the remaining spaces in the Top 5 with debut chart-topper Don't Cha from 2005 (630,000 sales) and, perhaps surprisingly, 2009's Jai Ho, taken from Oscar-winning movie Slumdog Millionaire and the band's last Top 10 (600,000 sales).

Icona Pop are our only duo – although they had a little help from Charli XCX. I Love It is at 6 with 570,000 sales

OK, so things are about to get very blokey round here – no locker room chat, thank you very much.

When it comes to boybands, the Top 10 is dominated, in typically male fashion, by one act in particular. Take That take up four spaces with some huge hits.

Most interesting is the top-selling single by a boyband didn't make it to Number 1! Rule The World stalled at Number 2 in 2007, but has still shifted 1.05 million copies, giving Take That a second million-seller after 1995's Back For Good.

Settling for second place, but with another million-seller, it's the big sensation of the Tens (or the Teens, whatever we're calling the 2010s), One Direction! Their debut What Makes You Beautiful is the most recent song to clock up seven-digit sales.

Top international boyband are Westlife, who notched up an incredible 14 Number 1s. Their biggest seller? It's a cover of Billy Joel's Uptown Girl, the official Comic Relief single of 2001, with 795,000 sales.

MORE: See all Take That's UK hit singles and albums in their archive

So who's the biggest?

Ah, we couldn't possibly say, but the boys do have two million-sellers, and all the songs in their Top 10 reached the Top 2. The ladies do, however, have a wider range of acts, if that makes any difference to you. Tell you what, we'll leave you with the facts and let you lot do the debating among yourselves.

What about the bands who mix it up a bit?

So when it comes to pop groups who have male and female members, who's out in front? Well, it kind of depends on the criteria you're using, but if we're talking bands where at least two people provide vocals, Black Eyed Peas are ALL over this one. They hog three spaces in the Top 5 with three huge hits. I Gotta Feeling, Number 1 in 2009, is top of the shop, with an astonishing 1.46 million sales with their big breakthrough hit Where Is The Love at 3 (994,000 sales) and Meet Me Halfway at 4 (866,000 sales). And they're at 10 with Just Can't Get Enough (405,000).

MORE: See all Black Eyed Peas' hit singles and albums in the UK

Elbowing their way in are one of the very first huge talent show reality stars Hear'Say, whose debut hit Pure and Simple has shifted 1.09 million copies. S Club 7 also show some muscle, taking up three slots in the Top 10, with solid banger Don't Stop Movin' coming out in front at 5 with 810,000 sales

The Official Top 10 bestselling songs by pop groups with male and female members (at least 2 of whom provide vocals – yep, we went there)

Look back at the biggest selling single from every year in chart history in our gallery: