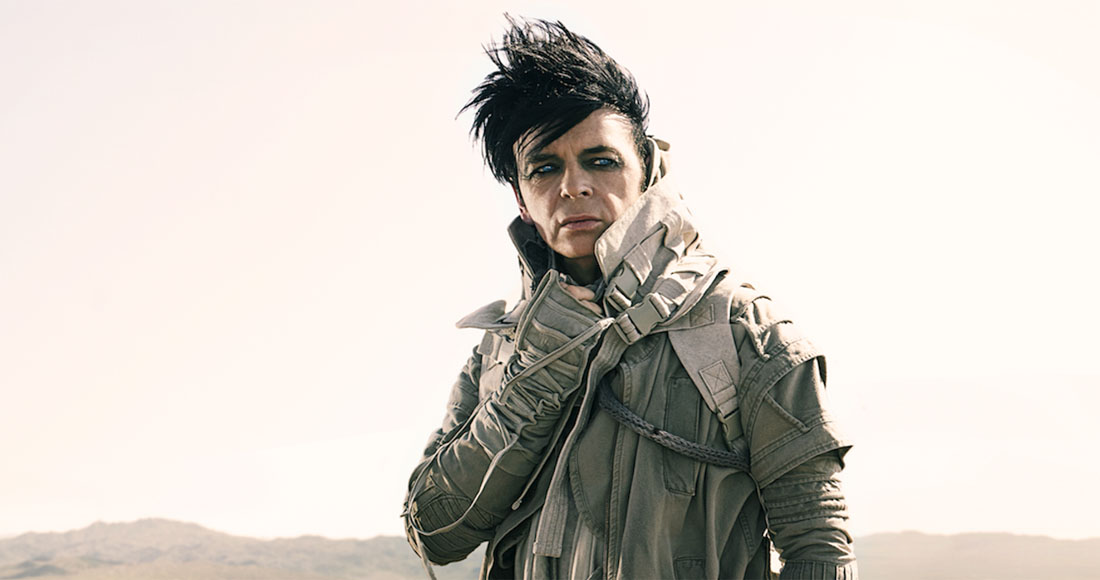 They say never judge a book by it's cover, nor an album by it's title. But when it comes to Gary Numan's new record, it's difficult not to. Called Savage (Songs From A Broken World), the singer-songwriter's 22nd studio album is set in an apocalyptic, post-global warming Earth in the not-too-distant future that's not for the faint of heart.

The album, which earned Gary his first Top 10 in 35 years on the Official Albums Chart this week, gestated in a pre-Brexit, pre-President Trump world, but its meaning undoubtedly evolved in the intervening years. We caught up with him to talk about his return to the top of the charts and his newfound status as a British institution.

Congratulations on the success Savage; did you think your Top 10 days were behind you?

“It’s the best thing for me for god knows, 35 years?! You can’t help but keep wanting more for it. This week has been like water torture, waiting to see the numbers and its chart placing every day. By my standards, the last album that came out in 2013 did very well. It was my first charting album in a long time, many decades. You think that sort of thing is never going to happen again.”

MORE: See where all of Gary Numan's singles and albums have charted in the UK

“It is important to me, actually. My wife says I’m a glass half empty sort of person. No matter how something good is at the moment, I can’t help but worry about what comes next. I felt there was a huge amount of pressure on me to come up with something better than what I’d done before, which was widely regarded as the best thing I’d ever done. I’m really happy with it musically and visually, but whether people will like it or not is totally out of your hands. It’s still a very weird feeling.”

You've continued to experiment with sound on the album, meaning it's not necessarily the most accessible record; is it reassuring to see it can still push through to the general public?

“It is actually. When you think about it, it’s not the happiest subject matter in the world – the album is about a global warming apocalypse - it’s not happy listening, it’s not dance music and it’s not particularly radio friendly. There’s quite a lot of things that, in a way, hold it back. When you make this sort of music though, you’re aware of the obstacles to cross. It’s the kind of music I want to make, so it’s all the more satisfying when it does do well and it gets into the chart. It was unlikely, this is an unlikely sort of record to do that. I’m trying to be a half glass full kind of guy about it for once!”

Savage first started as a Pledge campaign? Why did you decide to take that route when making the album?

“It started off at Pledge Music, but it was never about funding. I think these Pledge sites are seen as they were many years ago, but for many it’s moved away from that now. It’s more a strategic thing now - and not just with what you can do with a record and maintain your independence. People are very gloomy about the state of the music industry and sales being lower, but I think that’s such a narrow way of seeing things.

"It’s not all doom and gloom at all in my opinion. Sales aren’t what they were, but there are other things you can do. It’s forcing us all to be more creative about how we get our music out there. I believe a close relationship with fans is integral to longevity. I wanted to fans to witness the entire process of me making this album, from the first note I played to how the album cover looks and why, which is why the album started at Pledge.

We definitely get a ‘glass half empty’ impression of you on the album. As you say, it’s not the most uplifting subject matter…

“[Laughs] It does a bit, doesn’t it! Believe it or not, in normal everyday life I promise you I’m a cheery sort of person. I love my family and I love doing what I do. Though there is a big part of me that finds it incredibly difficult to accept a good moment in terms of my career. It’s probably because the early years of my career were quite difficult with the media. I wonder if I was scarred by that. It hasn’t been like that fro such a long time, but I think I’ll always doubt myself.

“The fantastic credibility I have at the moment – and people really do talk about me in such a lovely way – I can’t help thinking it’ll all change tomorrow. Somebody said I’d become like a British institution, which is amazing if it’s true, which probably means I’m more guaranteed a smoother ride in the next few years that I expected. It wasn’t like that in the early days though, so I’m still suspicious.”

Do you welcome the phrase 'British institution' and the work and responsibility that comes with it?

“I do, I'll certainly take it! It’s very flattering and it really makes a difference. It helps with what I’m doing and makes them more receptive and willing to listen. There’s a certain pressure that comes with it, but it’s no more than I put myself under anyway. I still love doing it as well, which is important. I still love making records and touring.

"I’m still looking for something new and how to move things forward. Not necessarily huge experimentation, but an album should be a progression from the last one, even if it’s a gentle one. My interest in music is the search for sounds, coming up with better melodies and production.”

This week marks exactly 38 years since your hit song Cars reached Number 1 in the UK; what are your memories of that period in your life?

“Amazing, incredibly exciting! I had two Number 1 singles and two Number 1 albums that year. It was my best year by a million miles. It’s funny, that time is all a bit blurry now, but there are certain chunks of time that remain crystal clear.”

Gary Numan's Savage (Songs From A Broken World) is out now.