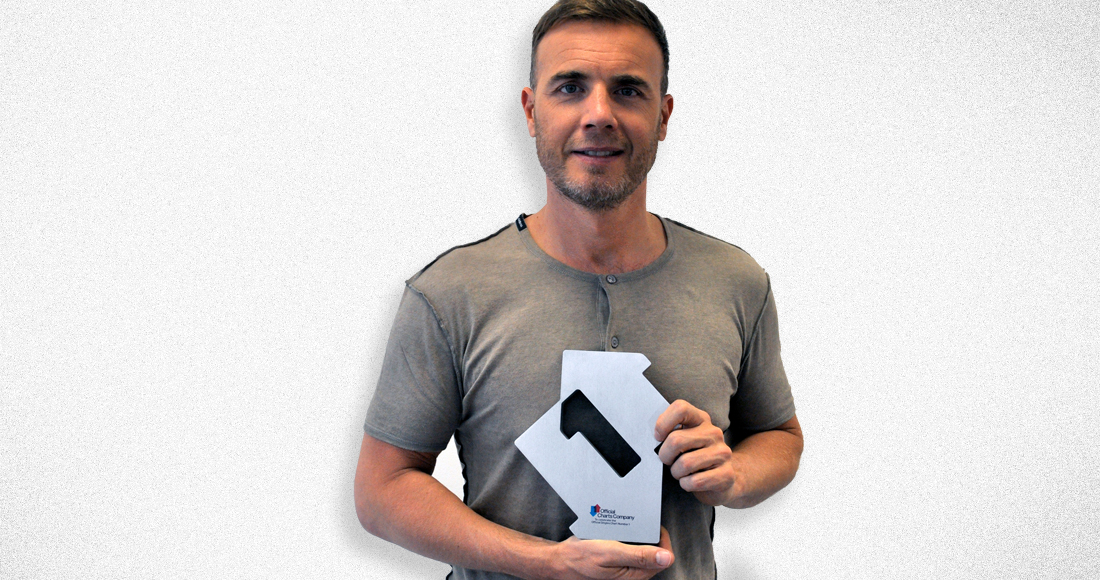 Gary Barlow rounds off a momentous career week today as he rockets his way from Buckingham Palace straight to an Official Chart double victory topping both the Official Singles Chart and the Official Albums Chart!

Sing, the official Diamond Jubilee song co-written by Gary Barlow and Andrew Lloyd Webber, has racked up a massive 142,000 sales since last weekend’s Jubilee concert, to become the biggest selling Number 1 of the year so far.  The closest any other track has got to this tally in 2012 is DJ Fresh FT Rita Ora whose chart-topping single Hot Right Now shifted 128,000 copies in its first week on sale back in February.

Gary Barlow is pictured presented with his Official Number 1 Award – the new award created by the Official Charts Company to celebrate 60 Years of the Official Singles Chart in 2012.  The brushed aluminium trophy is now presented in partnership with BBC Radio 1 to each new single that reaches the coveted Number 1 spot on the UK’s Official Chart.

“It’s been such a great week, it would take something very special to top it,” Gary told the Official Charts. “I’d like to say thanks on behalf of about 200 people as we’ve got a massive cast on this record. I love collaborating with other artists and being able to put them all on one stage the other night was such an honour for me. It’s something I’ll never forget.”

Meanwhile the album from which the title track is taken comfortably outstrips the rest of the Top 5 albums combined. Sing by Gary Barlow & The Commonwealth Band scoops the top slot on the Official Albums Chart too, making it the first Official Chart Double of the year so far, and the second of Gary Barlow’s career, his first chart double was Take That’s 2006 hallowed pop comeback with Patience and accompanying studio album Beautiful World.

Sing co-writer Andrew Lloyd Webber said: “The last time I had a Number 1 album and Number 1 single at the same time was for Evita in 1976 when both the album and Don’t Cry For Me Argentina were at the top of the charts.  So this is fantastic news about Sing!  Roll on the Queen’s Platinum Jubilee!!”

Flo Rida leads the way on the Official Singles Chart new entries this week with Whistle (Number 2), followed by Usher’s Scream at 5 and DJ Fresh’s new collaboration with Dizzee Rascal – The Power at Number 6.

Nelly Furtado is back with new lead single Big Hoops (Bigger The Better) (14), taken from her forthcoming first English language album in six years The Spirit Indestructible. Dot Rotten/TMS are new in at 15 with Overload, while Lady Antebellum’s 2010 track Need You Now is a re-entry at 22 after the song was covered by Gary Barlow and Cheryl Cole at last weekend’s Jubilee concert.  Justin Bieber FT Ludacris’s All Around The World enters at Number 30.

X Factor 2010 contestant Aiden Grimshaw scores a debut Top 40 hit with his critically acclaimed first single Is This Love at Number 35, while The Voice winner Leanne Mitchell narrowly misses out on the Top 40 as Run To You lands at Number 45 today.

This week's Official Singles Chart Top 10 is as follows. Click here to see the Top 100 in full after 7PM today.