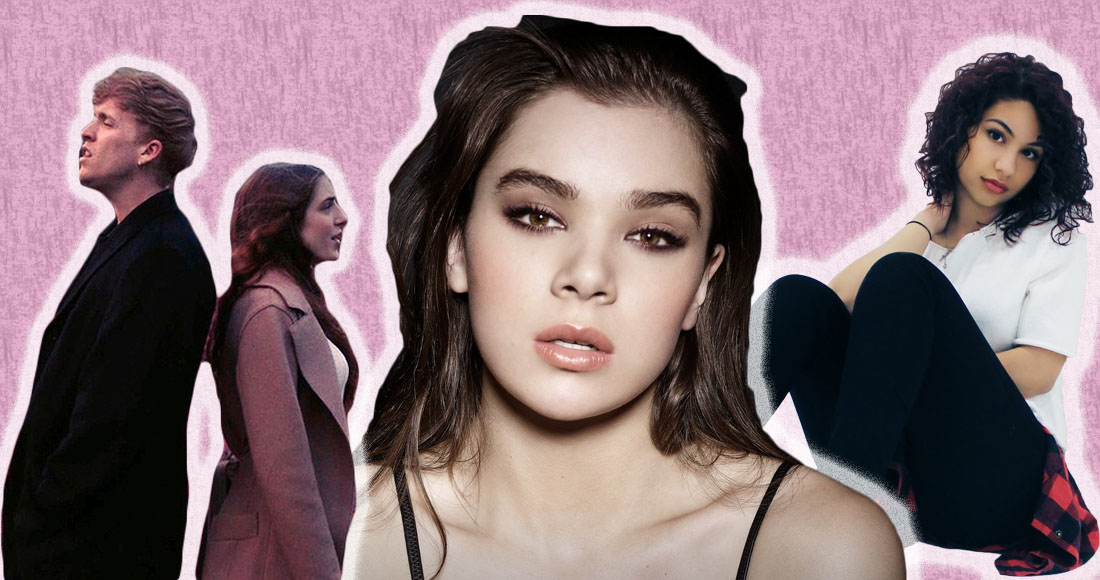 Listen to ten songs we're tipping to enter the Official Singles Chart in the coming weeks, including tracks by Birdy & Rhodes, Alessia Cara and Hayden James.

Hailee Steinfeld - Love Myself (out now)

After starring in a string of acclaimed films (including True Grit, Enders Game and, err, Pitch Perfect 2), Hailee Steinfeld made her grand entrance to pop music earlier this year starring as The Trinity in Taylor Swift’s Bad Blood video. Her first proper single Love Myself is a ludicrously joyous affair armed with a massive chorus about self-love. Take that as you will…

Already released and charting  in most corners of the planet already, DJ Snake’s remix of AlunaGeorge’s You Know You Like It is finally released in the UK next month. It’s an odd choice of song to reswizzle, but the trippy chorus and Aluna’s still-supple vocal is enough for us to enjoy it in its own right. Criminally, the original only peaked at Number 39 back in 2013, so in some ways, its second outing is thoroughly deserved.

Hayden James - Something About You (September 18)

After catching the attention of web's hype machine with club songs Permission To Love and Embrace, Aussie singer/songwriter/producer Hayden James has his sights set squarely on the Top 40 with his first single since signing a major label deal with Virgin/EMI. Something About You falls on the classy-yet-brooding end of the dance music spectrum; and it's already worming its way up the charts across the globe…

She rocketed back into the Official Charts last month thanks to that bank advert but now Birdy is back with new single Let It All Go. Collaborating with the complimentary crooner tones of newcomer Rhodes and backed by strong piano thuds we’ve come to know and love from the 19-year-old, could a fourth Top 40 be on the cards for her next month?

Klingande ft. Broken Back - Riva (Restart The Game) (out September 4)

Just over a year after his Number 3-peaking Jubel, French producer Klingande is back with Riva; another slice of tropical house that continues the Euro dance sound he helped make popular - wistful lyrics combined with a jaunty melody and plenty of harmonica to boot.

Having already entered the Hot 100 in America and her native Canada, Alessia Cara’s debut Here has been steadily building momentum over the last couple of months. Now the ‘anti-party’ anthem is gearing up to make its mark on the Official Charts and with celeb fans including Taylor Swift and Lorde backing her, we think she’ll do just fine.

Nick Brewer ft Bibi Bourelly - Talk To Me (out September 25)

You’re off to a pretty good start if your track already features an Official Singles Chart Top 5, and Essex-born Nick Brewer has just that in Talk To Me. Interpolating Crystal Waters’ 1991 house classic Gypsy Woman (La Da Dee), it’s hard not to toe tap along to this - regardless of how much you love or loathe it. Fun fact: featured vocalist Bibi Bourelly wrote Rihanna’s Bitch Better Have My Money!

Lost Frequencies is already responsible for summer chart-topper and four-time most streamed track of the week, Are You With Me. Sticking to the mid-tempo, country-flecked vibe that earned the Belgian DJ-producer his breakthrough, can Reality match the success of its predecessor come September?

Proving the magic that can happen when two of music’s biggest asses come together. If you look past the x-rated lyrics, Back Together is a feel good summer anthem, blending a catchy, finger-clicking chorus and mega Minaj breakdown with Max Martin’s (Britney Spears, Katy Perry, Taylor Swift) pop prowess. Note: The song loses points for the lyric “I wanna live between your legs”.

A quick back story: Level3 are London singer-songwriters Sean Mac and Lisa Greene, the latter of whom has helped write songs for Britney Spears, Kylie Minogue and the upcoming Jennifer Lopez single. They recently combined forces and quietly released their first single Feeling Your Love last month. However, with its niggling Laa Dee Daa hook and club-friendly chorus, we reckon it won’t be long until this makes an appearance in the Top 40.

Which upcoming releases are you excited about? Leave your comments below: