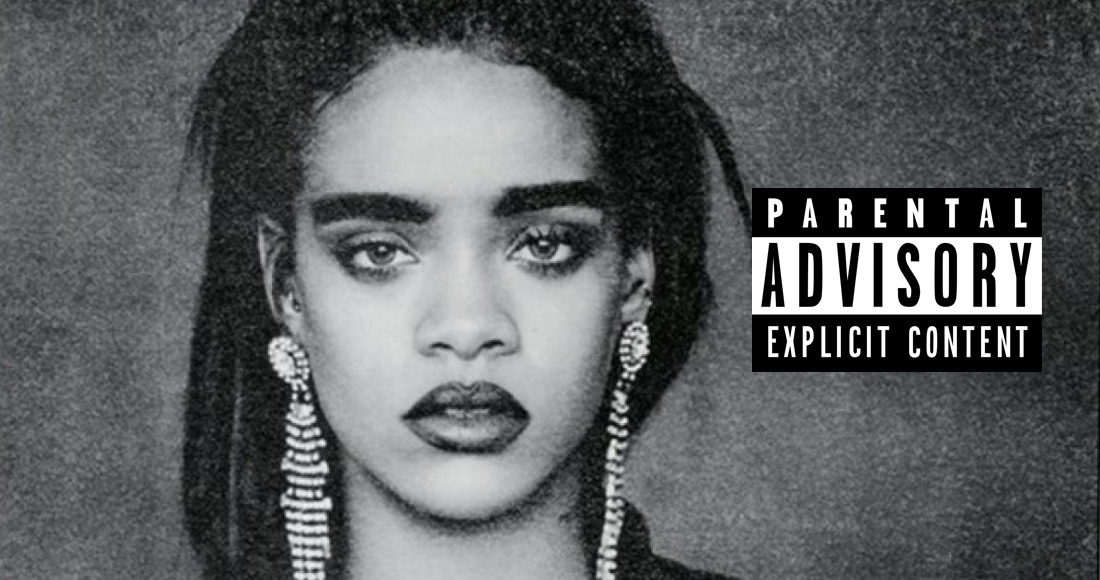 The chart is no stranger to swear words – radio stations have been wielding their censoring bleep for decades, and in some cases even making artists record an alternative version of a song to make it family friendly.

It's pretty rare, though, for artists to get expletive in the title, but it does happen. As Lana Del Rey celebrates her fourth UK Number 1 album with the sweary Norman F**king Rockwell, we dug into the archives to serve up a few other songs that could do with washing their mouths in soap and water.

Perhaps the most notorious duo of profanity-strewn tracks, this back and forth between supposed ex-lovers began with Eamon's F**k It (I Don't Want You Back). Eamon sang the F-word an eye-popping twenty times during his diatribe against a selfish ex and spent four weeks at Number 1. He was toppled by an "answer" record from Frankee, who claimed to be that very ex (but wasn't). Her slightly more tamely titled F.U.R.B – which stands for F**k U Right Back in case you were wondering – spent three weeks at the top. Then, seven weeks of expletive-filled chart domination were over. Thank f**k, some people may well have said.

Remember Cee-Lo's jaunty Number 1 from 2010, Forget You? The uncensored version was called F**k You, which makes more sense in contact of the other lyrics. Pete Doherty's post-Libertines band Babyshambles had their highest charting hit with F*ck Forever, reaching Number 4 in 2005.

Lauv and Anne-Marie are proving there's still room for a little F-word, especially if you're annoyed, enjoying chart success with F*ck I'm Lonely at the moment. In 2011, who can forget Enrique Iglesias' emphatic statement of intent with the hopelessly romantic Tonight (I'm F**kin' You), which reached Number 5. Pink had to chuck a few pound coins into the swear box herself in 2010 when F*ckin' Perfect gave her a 15th Top 10 hit.

Husband and wife global phenomenon Beyoncé and Jay-Z created their own supergroup for album Everything is Love. For the lead single, they both went high art, filming a video in secret in the Louvre, and also unleashed a fairly rare sh*t derivative on the charts, with the all-caps, all-sweary APES**T reaching Number 33 in summer 2018.

MORE: Artists who took control of their career, including Beyoncé and Taylor Swift

While pretty commonplace buried in lyrics and getting bleeped out on the radio, sh*t doesn't find its way into that many titles. Highest charting goes to D12's Sh*t On You (obviously not a love song, then), peaking at 10 in 2001. Others include Marilyn Manson's This is the New Sh*t (29 in 2003) and Timbaland's Cop That Sh*t (22 in 2004).

Rihanna is known for being pretty free with her swears when she feels like it, and she wasn't taking any prisoners with Bitch Better Have My Money, released before the ANTI album campaign kicked off. Backed by a big-budget, hyper-violent (but also quite funny, or was it just us?) video, BBHMM peaked at 27 in 2015.

The funny thing with this particular B-word is it tends to get censored depending on the context. The self-deprecating Bitch by Meredith Brooks went unchallenged when her Bitch reached Number 6 in 1997, but other hits have cannily switched out the "bitch" for another word for single release. David Guetta and Akon's 2009 Number 1 Sexy Chick was originally less innocent, and Busta Rhymes' 2006 Top 10 I Love My Chick had an unedited version called… well, you get the picture.

And who can forget Britney's use of the word on her own take on a motivational career TED talk, Work Bitch, her most recent Top 10, in 2013?

And speaking of Britney…

Sometimes, artists like to slip the swearing under the radar. Perhaps the classiest example was Britney Spears' Top 20 hit from 2009, If You Seek Amy. On the surface of it, a fairly innocent – if a little odd – title. But when you hear Britney sing it… hang on! "All of all of the boys and all of the girls are begging to if you seek Amy". Gasp! She is not talking about looking for her gal pal Amy, is she?

Slightly less subtle but no less sweary is Dua Lipa's IDGAF, which is short for I Don't Give A… well, we're guessing it's not Frappuccino.

The very British "arse" doesn't get much representation but its American cousin "ass" has made a few dents on the chart. Among them, Eminem had an Ass Like That, taking a seat at Number 4 in 2005, and Gym Class Heroes took their Ass Back Home to Number 9 in 2012.

When it comes to sexy stuff, aside from the f-word, most words are now kind of acceptable. Special mention goes to The Tams There Ain't Nothing Like Shaggin', a Number 21 hit in 1987 which is actually more innocent than it first looks. The shag was actually a dance craze immortalised in the 1987 film Shag (we swear we are not making this up) starring Bridget Fonda. A follow-up called My Baby Sure Can Shag grazed the Top 100 in early 1988. Look at The Tams' chart history if you don't believe us.

In late 1994, dance outfit 20 Fingers reached Number 21 with the fairly self-explanatory Short Dick Man, which was cleaned up as Short Short Man the following year and re-released, peaking at 11 – a victory for high moral values, perhaps. South Park's Chef also took his problematic Chocolate Salty Balls to Number 1 in 1998.

Badly Drawn Boy got caught short and ended up Pissing in the Wind in 2001, reaching Number 22, and former Ash guitarist Charlotte Hatherley had a bit of a run-in with a heartless lothario in Bastardo, cursing her way to Number 31 in 2005.

(We know there are loads more out there but there's only so much profanity we can take in one day.)