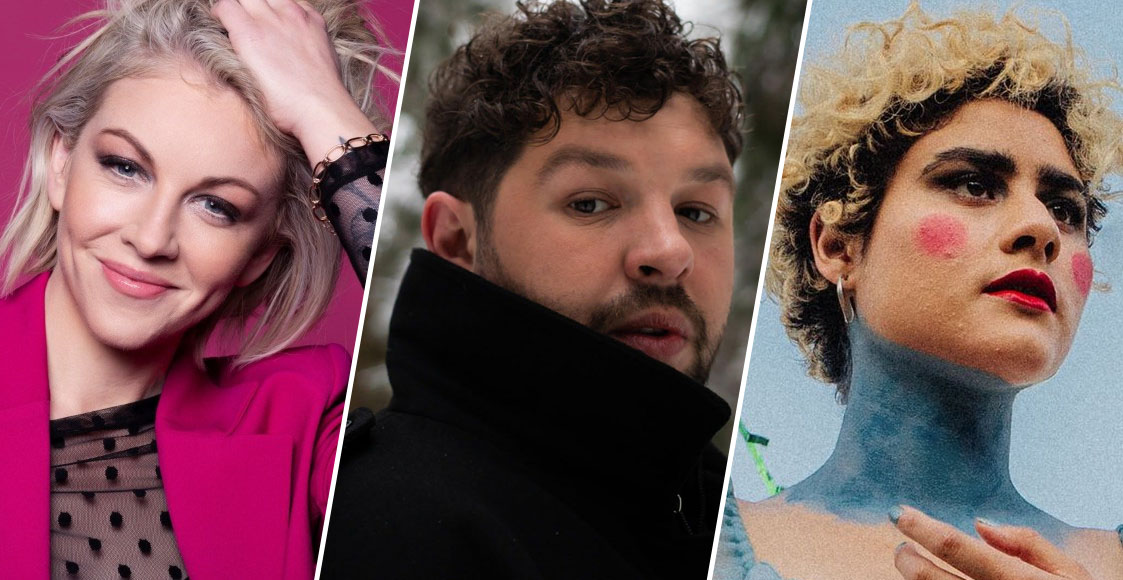 Contestants due to take part in the Eurovision Song Contest 2020 have been reacting to the news of the competition's cancellation.

Yesterday (March 18), the European Broadcasting Union confirmed that due to the current climate the contest would not be held in 2020, originally scheduled for Rotterdam in May. The EBU cited social distancing initiatives and travel bans as reasons for not running the competition in its 65th anniversary year.

The UK's proposed entrant James Newman said he was "absolutely gutted" not to be taking to the iconic stage, but has promised Instagram Live performances in the near future. James was set to perform One Last Breath at Eurovision.

The BBC's series producer for Eurovision Lee Smithurst praised James for "totally embracing" Eurovision, noting that the team had been filming scenes for James' staging the day prior.

Presenter Rylan Clark-Neal hosts the BBCs coverage of Eurovision's semi-finals. He posted a picture of Iceland's entry Daði og Gagnamagnið, one of the firm favourites to win, on Instagram captioned with his well wishes.

Sad news about @Eurovision but totally the right call. Flying 41 delegations into one city can’t work at the moment. Sending love to this years artists and bigger love to Jon Ola Sand . Stay well #Eurovision

Ireland's competitor Lesley Roy was due to sing Story Of My Life in The Netherlands. She hinted at representing her country again in future contests, saying that her "heart goes out to my fellow artists and Eurovision fans".

Australia's representative Montaigne has vowed to "make the best of this situation creatively" to help fans cope with the loss of the contest.

I’m gonna try figure out how to make the best of this situation creatively, see if there’s something I can present to you, the fans, that will feel satisfying, or will feel anything like closure, or at least coping. I’ve got a lot of fucking time on my hands so. Let’s get to work

In Sweden, they select their Eurovision hopeful via the six-week competition Melodifestivalen. Understandably after a huge undertaking, their head of delegation Christer Bjorkman was saddened "that a 64-year-old tradition is now broken". He paid tribute to the selected Swedish act The Mamas and their song Move.

Christer Björkman, Sweden's Head of Delegation, supports the cancellation of Eurovision, adding: "I especially feel for The Mamas, who will not stand on the stage of #Eurovision. It's also very unfortunate that a 64-year-old tradition is now broken". 👇https://t.co/m3zxENfym6

Bjorkman's message hints that The Mamas may not automatically compete at next year's Eurovision. Some countries have already confirmed that they will have the same acts represent them in 2021. So far they are: Bulgaria, Estonia, Georgia, Greece, The Netherlands, Spain, and Ukraine.

While some representatives will get their chance to perform at next year's contest, it is likely that they will have to sing different songs, something which Bulgaria's entrant Victoria is campaigning against.

Tears Getting Sober is a project that means the world to me as an artist and to the great team behind it. I understand and respect this necessary decision but I also believe we, the 2020 #Eurovision artists, should be allowed to perform our songs in 2021.
https://t.co/i0oyQQ3H2g

Finally, last year's winner Duncan Laurence encouraged fans to stay safe and share love, adding that Eurovision will be back "hopefully when our hearts and minds can enjoy it".

I feel sad. From time to time even a bit lost these days. But I realize at the same time there are some things that we can’t predict, prevent or change right now. Things that go further then our powers. Above all, health is the most valuable thing for every living being. It’s something we should always take seriously. I just heard that the Eurovision can’t take place in May this year due to the COVID-19 virus. I know so many of you were looking forward to this beautiful event and so was I, but it’s the best decision for everyone’s health. Hopefully next year when the world is a bit more calm and a few steps further in healing. Hopefully when our hearts and minds can enjoy it just like we did last year and all those years before. Hopefully a little bit But for now... it’s time to focus on ourselves and most importantly our health. Stay safe❤. And let’s take a moment in the comments to share love. Do what you feel: share stories, tag loved ones, friends, family, let them know that even when the world gets a little more scary, love is still the answer.